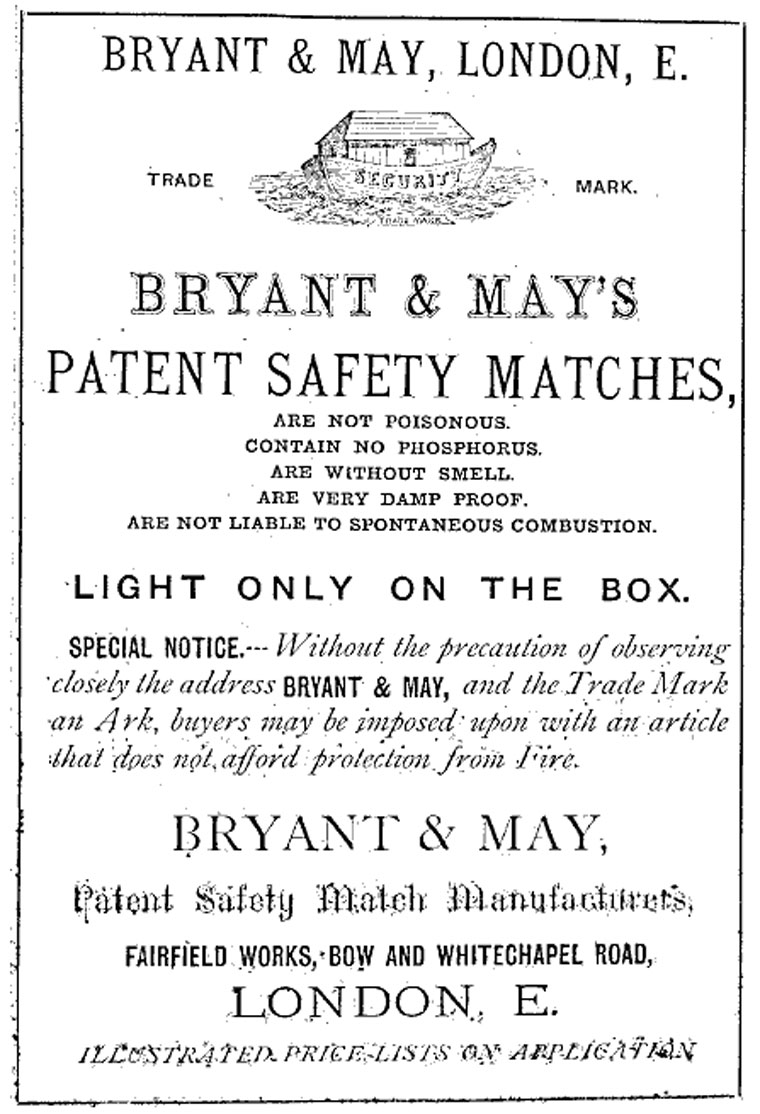 1827 A pharmacist in Stockton-on-Tees first sold "friction wax vestas"[1] - could this be Francis May?

1836 Bryant invented and patented the "manufacture of liquid and paste blacking, by introducing India rubber, oil and other articles and things."

1843 A partnership was formed in 1843 between, two Quakers, Francis May and William Bryant, to establish a Provisions Merchants business in Tooley Street, London.

In 1850 they started importing Swedish matches, produced by Carl and Johan Lündström. Their first order was for 10 or 15 cases of 720,000 matches (each case held 50 gross boxes, with a box holding 100 matches). The next order was for 50 cases; and later orders for 500 cases.

This partnership was successful, so Francis May and William Bryant decided to merge the partnership with Bryant's company, Bryant and James, which was based in Plymouth.

By 1853 Bryant and May were selling over 8 million boxes of matches per year; which was approximately 50% of the output of the Lundström brothers.

1861 The company, Bryant and May, was founded with the specific aim of making only Safety Matches. They were influential in fighting against the dreadful disease known as Phossy jaw which was caused by white phosphorus used in the manufacture of the early matches. They started on a site in Bow, which had once been used for the manufacture of candles, crinoline and rope, but had fallen into disrepair. This site was gradually expanded as a model factory.

The public were initially unwilling to buy the more expensive safety matches so they also had to make the traditional Lucifer Matches.

1877 Patent to Frederick Carkeet Bryant, of the Fairfield Works, Bow, in the county of Middlesex, for the invention of "improvements in machinery for applying igniting composition to match boxes." — A communication to him from abroad by John Lundstrom, of Mariestadt, in the Kingdom of Sweden[2]

1884 The company was registered on 12 June, to acquire, as from 1 July, the match manufacturing business of the firm of the same name. The business of the Bell and Black Match Co was subsequently taken over. [3]

1888 They were the target of the Match-girls Strike of 1888, which won important improvements in working conditions and pay for the mostly female workforce.

To protect its position Bryant and May merged with or took over its rivals.

By 1899 the American match maker, The Diamond Match Company, had bought an existing match factory in the United Kingdom, at Bootle, near Liverpool, and installed a continuous match making machine that could produce 600,000 matches per hour. Their matches were sold under the Captain Webb, Puck and Swan Vestas brand names.

1902 Bryant and May was the biggest match-maker in Britain.

At some point Bryant and May acquired Jahncke of Highbury, makers and printers of tins when matches were packed in tin boxes; the company was retained after the use of tins for matches ended[4]

1913 Bryant and May also took over the Gloucester match maker S. J. Moreland and Sons, who made and sold matches under the brand England's Glory.

1914 Established one of the first staff pension schemes[5].

1919 Established one of the first co-partnership and profit sharing schemes with its employees[6].

c.1925 Bryant and May acquired 50% of Chambon Ltd of Hammersmith; the older, French company of Machines Chambon S.A. of Paris owned the other half[7].

1927 Bryant and May combined with the Swedish Match Company's interests in the British Empire (except for major plant in India and elsewhere in Asia) and J. John Masters and Co and certain other manufacturing and sales interests to become the British Match Corporation[8].

1929 the British Match Corporation set up a jointly-owned company with another Quaker company Albright and Wilson as The A. and W. Match Phosphorus Company. It took over the part of Albright and Wilson's Oldbury site, that was manufacturing amorphous phosphorus and phosphorus sesquisulfide (these two chemicals were used in safety matches and strike-anywhere matches, respectively).

1959 Added to existing subsidiaries involved in steel wool, scouring pads and cloths, by acquiring L. N. Mills of New Malden and its 3 associates the London Wire Co (formed 1935), Sunray Products (Rubber) which Mills had acquired in 1938 and Rotary Brush Wheels, formed in 1949[13].

1960 James Pain and Sons, firework makers, were acquired by Bryant and May[15].

1962 Waeco, another firework maker, was acquired by Bryant and May, in addition to the existing fireworks companies of James Pain and Octavius Hunt[16].

1962 Bryant and May acquired Bartrev Board Co, another maker of chipboard[17].

1967 45% of turnover came from businesses other than matches, the principal one being Airscrew-Weyroc[19]

1969 Thomas M. Nutbrown, maker of kitchen and general household products, was acquired by Stephenson Mills, a member of the British Match Corporation[20].

1973 the British Match Corporation merged with Wilkinson Sword to form the new company Wilkinson Match; bringing the 2 diversified companies together had questionable logic although it would allow Wilkinson to make use of British Match's established distribution networks[21]. The merger was cleared by the Monopolies and Mergers Commission[22].

Wilkinson Match was then taken over by an American company who shortly afterwards became bankrupt.

1979 The original Bow match factory was closed, when it still employed 275 people; unlike some of the other match factories, little recent investment had taken place.