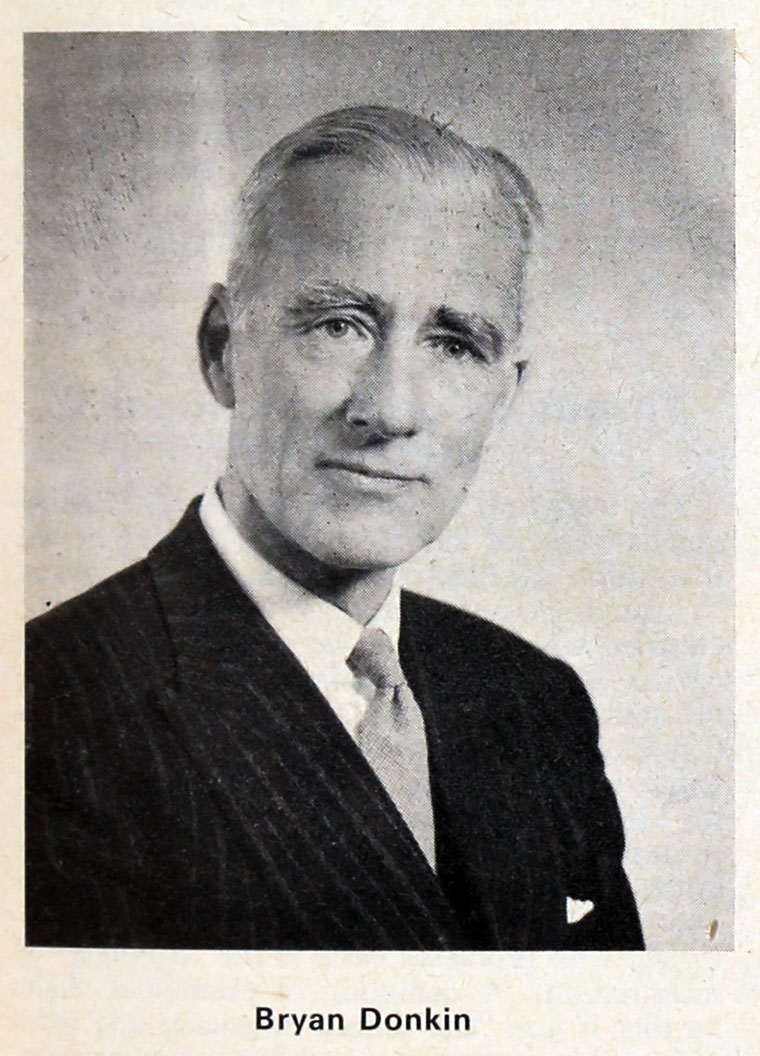 Three-year apprenticeship with English Electric Co, followed by one year with General Electric Co in USA

Worked on the design and construction of the 132 kV and 275 kV transmission system in the UK and many power generation schemes, and the Pimlico district heating scheme.

"WE regret to record the death of Mr. Bryan Donkin, which occurred on October 17. Mr. Donkin was sixty one. He was the senior partner of Messrs. Kennedy and Donkin, and was a vice president of the Institution of Electrical Engineers.

Bryan Donkin was born on April 29th, 1903, into a family which had already distinguished itself in engineering circles. He was the son of the late S. B. Donkin and great-great grandson of Bryan Donkin, F.R.S., who was active with other engineers in founding the Institution of Civil Engineers. He was educated at Gresham's School, Holt, and Pembroke College, Cambridge, where he took an engineering degree. After leaving Cambridge he served a three-year apprenticeship with The English Electric Company Ltd., followed by a year's special course with the General Electric Company (U.S.A.) at Schenectady N.Y. and Pittsfield, Massachusetts.

He became a partner in the consulting firm of Kennedy and Donkin in 1933. His work was subsequently concerned with the construction of 132kV and 275kV overhead transmission lines and substations for the Central Electricity Generating Board, and numerous thermo-electric generation schemes for industrial plants. He was also responsible for the design of a 300MW hydroelectric station in Venezuela and for the Pimlico district heating scheme for the City of Westminster, a project initiated by his father ; his paper describing the latter work won him the award of the Telford Premium of the Institution of Civil Engineers. The Pimlico scheme is the only public power supply in this country utilising combined heat-electric generation. In his paper, which he wrote jointly with the late Dr. Margolis, (see THE ENGINEER, December 25, page 850, 1953) the advantages of this type of development were stressed, and although there have been no further examples in this country, the remarks made in the paper remain topical, and indeed would have been pertinent at the recent Lausanne conference, where this subject was very much in evidence.

He was also active on committees of various governmental organisations, and of the British Standards Institution and the I.E.E. He was also a frequent United Kingdom delegate to the meetings of the International Electrotechnical Commission. Amongst his recent activities may be mentioned a visit to Ghana in 1959 at the request of the President of the Board of Trade as a member of the Trade and Industrial Mission. He was responsible in 1960 to the Ministry of Fuel and Power for an investigation and report on energy-storage by compressed air, and also a member of the panel reporting to the British Transport Commission in 1960 and 1961 on power supplies for the London Transport Executive. Recent consulting work included an appointment in 1962 to advise during the reconstruction of the Lots Road power-station, and his appointment in 1963 as consulting engineer for the heating of the City of Westminster's housing scheme in Lillington Street.