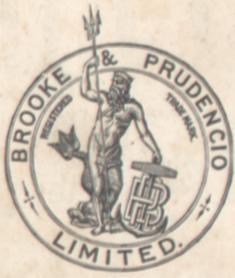 1889 Limited company registered on the 16th of August [1], as a partnership between Francisco Prudencio and Thomas Brooke. After the formation of the company, Brooke and Prudencio moved their bottling equipment from their existing factories on Captain Carey's Lane and Nine Tree Hill, both in Bristol, to a new factory at 124-32 Newfoundland Road, St Pauls, Bristol.

1960 Went into receivership on the 15th of January.