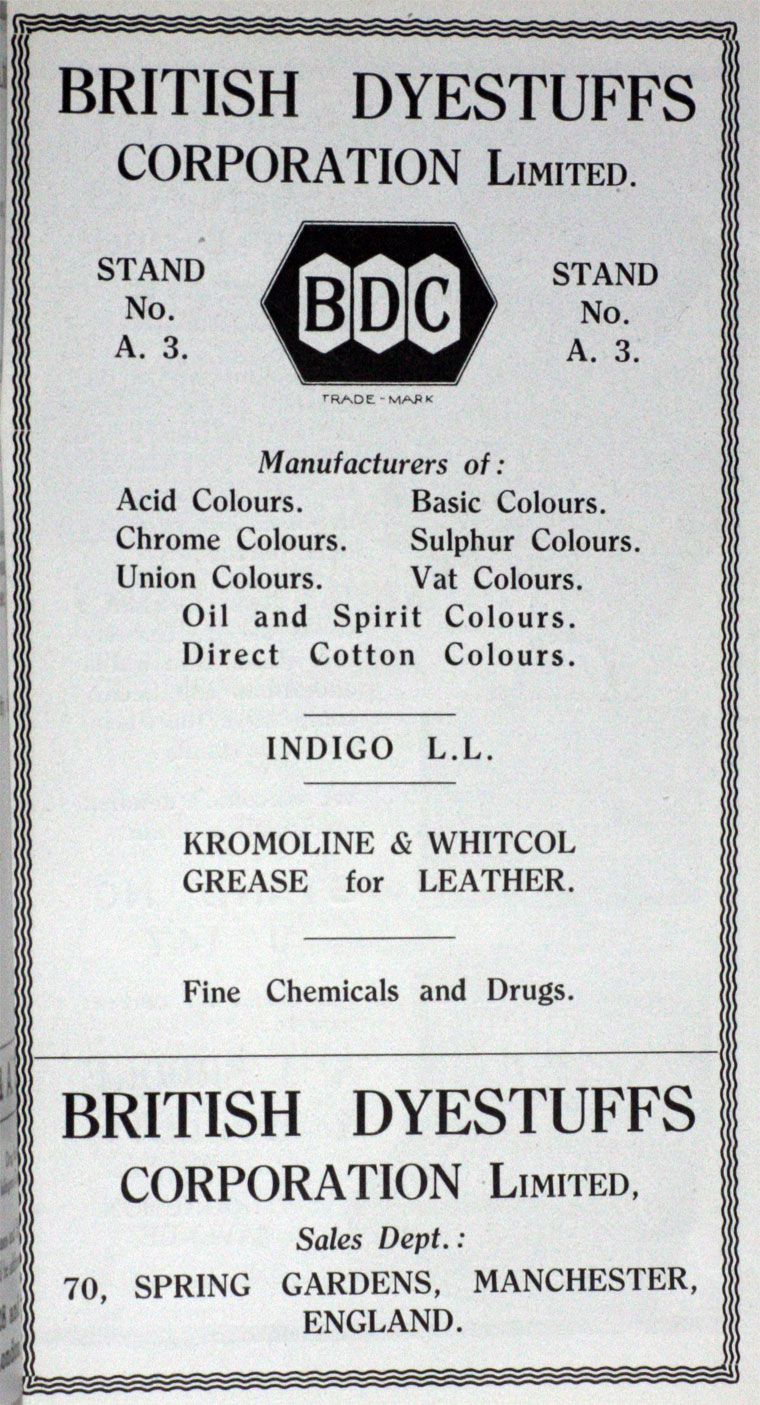 With finance from his father and his brother's assistance, Perkin built a dye works at Greenford Green near London.

1857 The dye was successfully manufactured and in commercial use by December.

Other dye manufacturers soon followed, such as Read Holliday and Sons in Huddersfield. Until 1875, the British dye industry grew rapidly, but soon Germany overtook to become the industry leader.

1913 By now, 80% of the dyes used in Britain were supplied by the Germans with only one small production factory. Even the 20% made domestically was heavily dependent upon intermediates from Germany. Pre-war consumption of dyes in Britain was 20,000 tons, of which 18,000 tons were imported from Germany.

1914 With the onset of World War I, stocks of dyes and intermediates were depleted and the textile industry was in danger of being shutdown. Explosives were also needed for the war effort, so the Government subsidized some firms, including Read Holliday, to boost their output of picric acid and TNT. Late in the year, Dr. Emile Bucher, owner of a dyewood factory in Jamaica, recommended further Government involvement in the dye industry to Lord Moulton.

1915 A new company, British Dyestuffs Ltd, was formed which purchased Read Holliday and Sons. The Government provided part of the capital, repayable in ten years. The research staff in Huddersfield grew to 100 chemists to support the range of acid, basic, mordant, sulphur and vat dyes.

1916 The company performed well, paying a dividend of 6% on its capital.

The Turnbridge Works, which had produced dyes since 1860, was becoming obsolete. A new plant was built in Dalton, on a site further down the River Colne valley. The design and layout of the Dalton Works presented startup problems.

Harry McGowan (1874–1961), managing director of Explosives Trades Ltd which had recently been formed to merge the British explosives companies, was also closely concerned with moves to bring about a similar merger of British dyestuffs businesses[1].

1918 British Dyestuffs Ltd began a relationship with Levinstein, the largest independent company with a dye works in Blackley, Manchester. Dr. Herbert Levinstein, head of the company, made recommendations to solve the operating problems at Dalton. The Dalton Works covered several hundred acres and had units for the production of raw materials.

1920 Total UK output was 25,000 tons of which the British Dyestuffs Corporation produced 16,000. But the range of the company's dyes was small: 500 compared with 2,000 dyes available to British manufacturers before the war.

1922 An Important Dye Discovery was made by the laboratory staff of the company regarding the properties of the ionamine dyes.[3]

1926 A process for the prevention of mildew in textile fabrics by the use of halogenated phenols, was developed and patented by the British Dyestuffs Corporation.[4]

1926 Imperial Chemical Industries (ICI) was formed when British Dyestuffs Corporation merged with three other large companies to become a major part of the global industry. These were Brunner, Mond and Co; Nobel Industries; and United Alkali Co.

The merger provided the new company with the scale to compete in the world market.