Grace's Guide is the leading source of historical information on industry and manufacturing in Britain. This web publication contains 147,946 pages of information and 233,606 images on early companies, their products and the people who designed and built them. 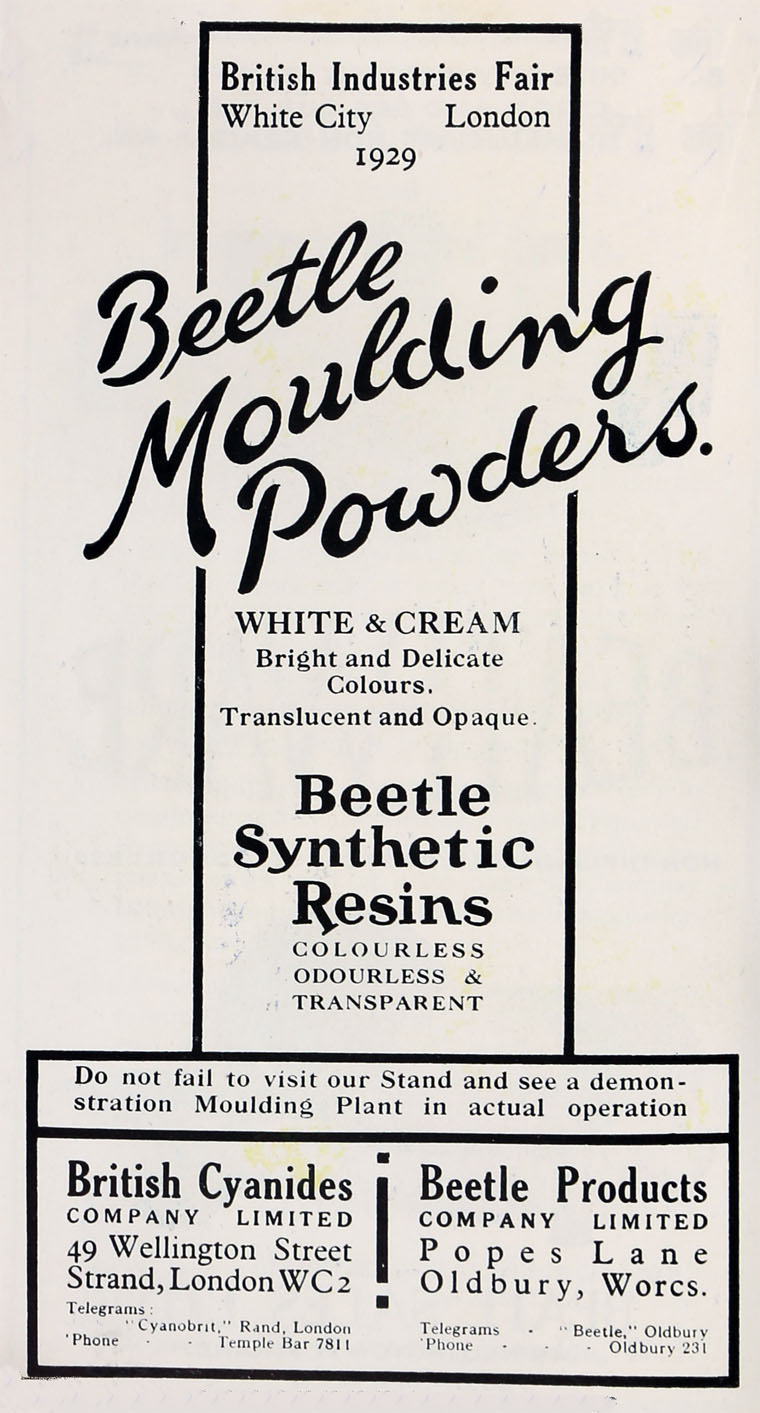 c.1880 The development of the MacArthur-Forrest process for extracting gold from low-grade ore and mine tailings using cyanide excited the interest of a number of companies.

1894 Albright and Wilson and Oldbury Alkali Co, neighbours in Oldbury and both engaged in the production of cyanide, decided to join forces in this business. A small subsidiary, British Cyanides Co Ltd, was formed under the chairmanship of Alexander Chance, and a plant was constructed on a piece of land adjacent to both companies. They experienced difficulties in converting sulpho-cyanide into cyanide. When the South African War broke out in 1900, the largest market for cyanide disappeared and all but 2 of the British suppliers left the business, one of the survivors being British Cyanides Co.

1901 Facilities were constructed to convert sulpho-cyanide into ferro-cyanide but market prices soon fell below the cost of production. Kenneth Chance was elected to the Board of British Cyanides. He suggested selling its stock of 200 tonnes of prussiate of soda (now at an elevated value) to pay off the bank overdraft and save the company.

1904 British Cyanides developed an economic method of producing cyanide from prussiate of soda. The company was registered on 1 July, in reconstruction of a company of similar title[1]

1906 Breakdown of the plant that had been erected at gasworks for the extraction of sulpho-cyanide; the company took full responsibility and replaced the plant at its expense[2].

1911 Looking for cheaper raw materials, the company turned to what became known as the Barium process, for the fixation of atmospheric nitrogen. It built a furnace large enough to yield production quantities of cyanogen from which it could make sodium cyanide.

1913 At this time the company was a small enterprise with just one factory on a leasehold site making one product, cyanide of soda[3].

1914 The outbreak of war disrupted supplies of cyanide to the Transvaal mines which had been largely served by German manufacturers; British suppliers increased production to fill the gap[4].

1914 The Barium process project came to a disastrous end with the overheating and cracking of the furnace. Lessons were learned and the process developed on different lines; this also provided the opportunity for new developments which subsequently determined the future development of the company[5].

1914 A new factory was completed on a second site just before the start of the war[6].

1914 With the help of the Ministry of Munitions, British Cyanides built a factory at Rood End, Oldbury, capable of manufacturing large quantities of potash needed for producing high quality lenses for the Royal Navy. The source had been in Alsace, now occupied by Germany. The British Potash Co was formed in conjunction with the North Lincolnshire Iron Co and others, who had combined with the government to develop the potash industry in the UK[7].

1915 With the aim of producing whatever was required by the Ministry of Munitions, British Cyanides laid down plant for small-scale production of permanganate of potash for use in gas masks and developed a process using chlorine which was expensive but more productive.

By 1918, output of permanganate had increased to 40 tons per week but later, when the question arose of payment for the extra costs of the installation, the Government raised objections. In a costly lawsuit in 1921, the company won a judgement that they were entitled to recompense due to their "implied contract" with the government[8].

1918 Increase in issued capital in connection with the company's investments in British Potash Co and the National Research Syndicate and acquisition of Fred Danks Ltd which would provide room for expansion at Oldbury (and which also turned out initially to be a good business investment)[9].

Post-WWI. The company produced yellow prussiates of soda and potash.

1920 Extraordinary general meeting to approve increase in capital for expansion; the boiler-making activities of Fred Danks Ltd were to be closed because of competition from second hand boilers[10].

1922 A sudden US import tariff affected British Cyanides severely. The Tat Bank factory had to be closed down and the plant moved to Popes Lane, the Barium process was finally abandoned and focus was placed on converting sulpho-cyanide into other, more saleable compounds. Manufacture of red prussiate by electrolysis, in plant designed by Edmund Rossiter, provided a small but regular business.

1922 Listed Exhibitor - British Industries Fair. Manufacturers of Yellow Prussiates of Soda and Potash, Carbonate and Bicarbonate of Potash, Permanganate of Potash. (Stand No. A.27) [12].

1923 New process for fixation of atmospheric nitrogen was started up but it subsequently transpired there were problems with the process; resumed production of permanganate of potash[13].

Managing Director, Kenneth Chance, visited the USA, and returned with the idea of converting sulpho-cyanide into thio-urea, for use in vulcanizing rubber and weighting silk. This really turned the tide for British Cyanides for, as taffeta and weighted silk went out of fashion and cheaper methods of vulcanizing appeared, Edmund Rossiter conceived the idea of condensing thio-urea with formaldehyde to produce water-white resins.

1924 On the brink of bankruptcy, Kenneth Chance cut staff costs and persuaded 2 friends to provide funds for a company established for the purpose of exploiting the new resin - this was the Beetle Products Co[15]. With funds from a Birmingham bank, the company developed the new moulding material.

1925 The new resin, displayed at the Wembley Exhibition, was very successful. In spite of the encouraging interest shown by french polishers and manufacturers of wall plugs, for instance, what was wanted was a quick and profitable return; tableware provided this new market.

After 1926, with attractive applications for the new Beetle® moulding powder being demonstrated in big stores across the UK, British Cyanides Co put the worst troubles behind it.

1927 The business was reorganised with the aim of concentrating on amino-plastic moulding powders[16].

1929 The Streetly Manufacturing Co (SMC) was purchased by British Cyanides Co when SMC's owner died, giving British Cyanides Co ownership of its own moulding factory which would assist in the development and improvement of its Beetle® moulding powders, providing first-hand experience of moulding performance under production conditions.

1932 Return to profitability after several years of losses and financial reconstruction; Beetle Powder and Beatl ware had been established as products of the highest quality[18].

1933 Acquired the rights to the Pollopas patents for Urea resins and moulding powders which would be made at Oldbury[19].

1936 Unable to recruit the highly skilled toolmakers needed to machine and build precision moulding tools at the Streetly Manufacturing Co and recognising the importance of design and production of moulds, the board decided to set up a second manufacturing subsidiary, B.I.P. Tools, as its own tool making company. SMC’s toolroom and its works manager were moved to a purpose-built factory on a green-field site close to Birmingham. Refined mould design techniques produced better mouldings and B.I.P. Tools was created to employ those techniques in designing and producing the moulds. In addition to producing the moulds needed by SMC, B.I.P. Tools also supplied others in the industry.