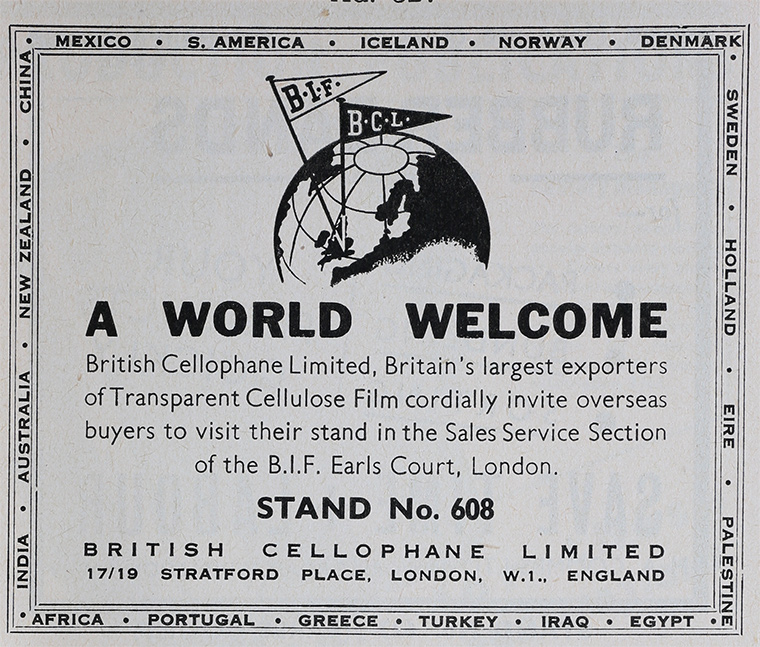 1892 The process for making cellulose from viscose was discovered by three English chemists, Charles Frederick Cross, Edward John Bevan and Clayton Beadle (who then set up the Viscose Syndicate).

1935 British Cellophane Ltd (BCL) was a joint venture company formed between La Cellophane SA and Courtaulds, when they began building a major factory in Bridgwater, Somerset.

1937 British Cellophane set up production in Bridgwater, when unemployment levels in the town were high. The new buildings covered 59 acres and had direct railway access.

The factory produced cellophane up until late 1940 when, during World War II, it switched to producing war munitions; including Bailey bridges for the pending invasion of Europe. These were first used in Italy, in 1943, and production increased through early-1944 for D-Day.

In 1957, a secondary facility opened at Dalton in Lancashire. A subsidiary Colodense, of Bedminster, Bristol produced specialist printed and coloured bags for loose food packaging in supermarkets.

1960 Acquired Donaldson and Filer of Glasgow, to broaden the company's experience in using Cellophane[2].

In 1974 the company won the Queen's Award to Industry and by the late 1970s the site produced 40,000 tonnes of cellophane packaging film a year, employing 3,000 people.

In 1988 three separate factories on the site were producing cellulose and polyethylene film, and bonded fibre fabric.

1994 The rail link closed, and the Dalton factory closed after the company was bought by UCB Films (later Innovia Films). The Dalton plant then employed 450 people.

In 2004, sales were dwindling due to alternative packaging materials; viscose was becoming less popular due to the polluting effects of the manufacturing process. Innovia decided to close one of its two plants at either Bridgwater or Tecumseh, Kansas. British economic development officials offered a £60,000 tax break over three years to Innovia to preserve the profit-making Bridgwater plant, while Kansas offered £1 million if it kept the loss-making plant at Tecumseh open.

2005 Bridgwater closed in the summer of 2005, while Tecumseh remained open. Bridgwater saw the loss of the remaining 250 jobs and the site is now an industrial estate.