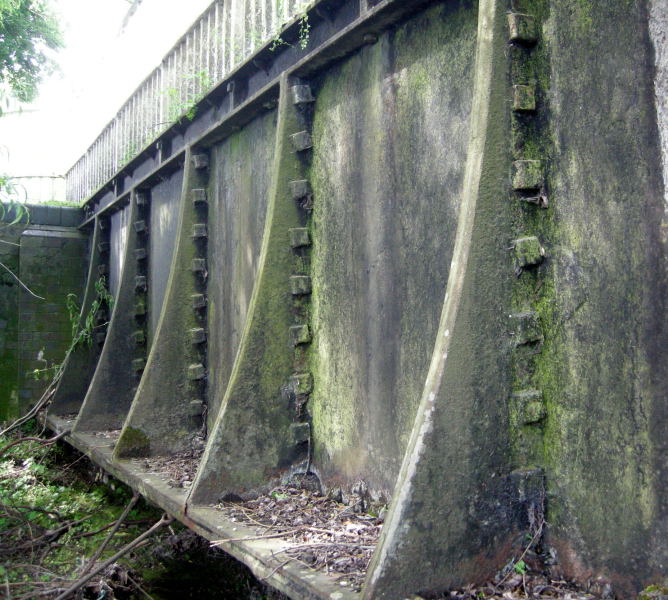 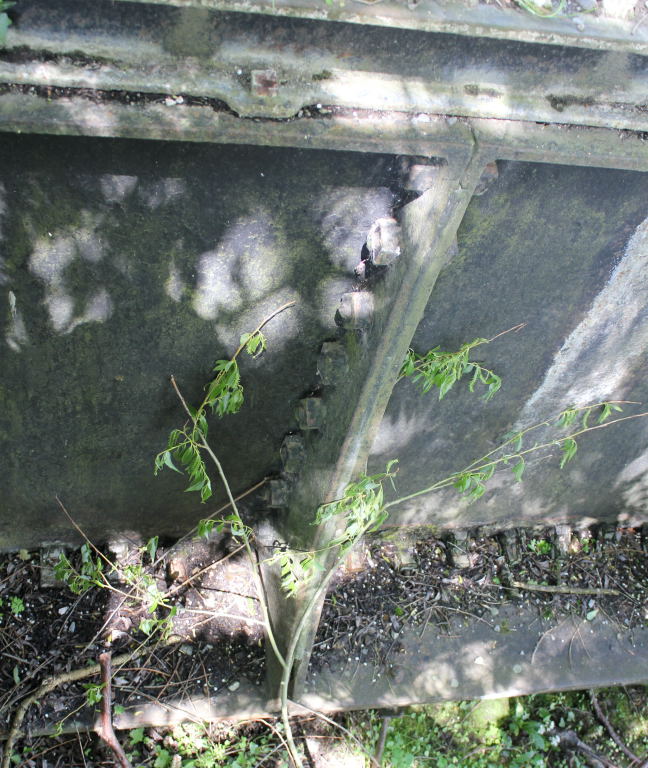 4. Note how the gap between the vertical flange is small at the top and larger at the bottom (nearly obscured by the tree's branch) 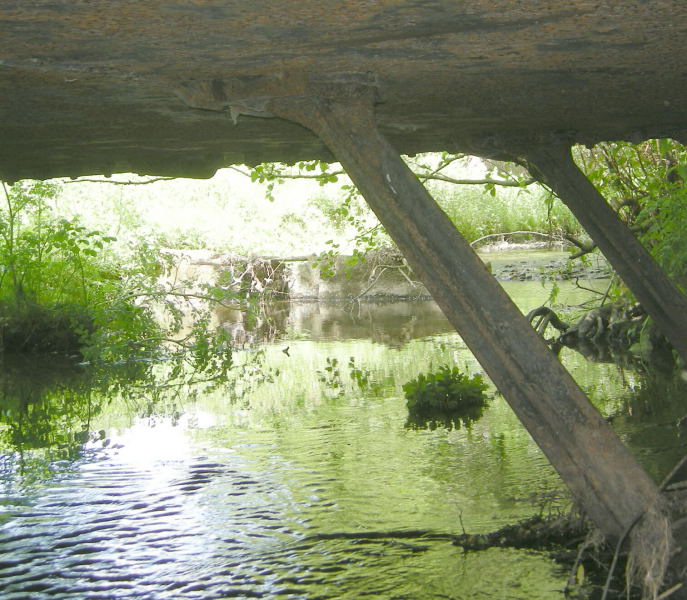 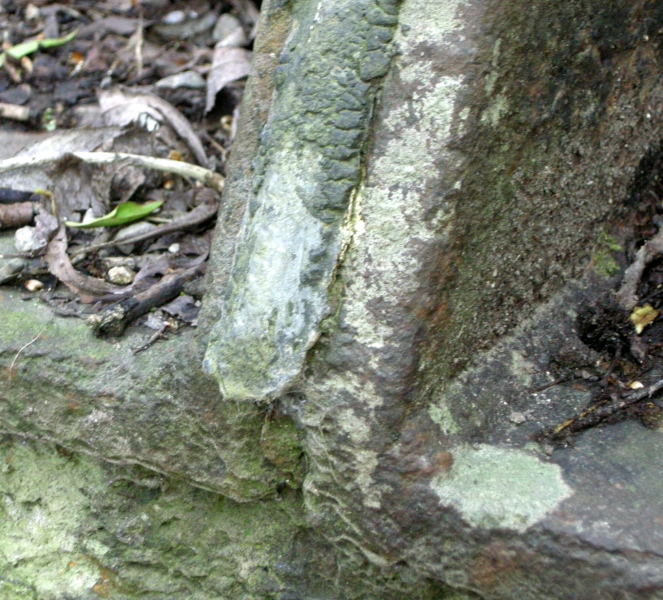 7. Note the three inclined cast iron props partly buried in silt. These provide additional support for the trough from the abutment

Takes the Montgomeryshire Canal over the Luggy Brook, 4 miles south of Welshpool, Powys.

This is a cast iron aqueduct designed by George Watson Buck and constructed in 1819.

The aqueduct is assembled from flanged cast iron panels bolted together to form the sides and floor. The basic type of construction was typical for the early 19th C., although Brithdir has some unusual features, notably the vertical flanges (webs) of the side panels, which are flared to become unusually deep at the bottom. Their depth is far greater than on the nearest comparable predecessor, Stalybridge Aqueduct. Cosgrove Aqueduct also has flared ribs, but is an altogether more complex structure.

Stephen Hughes’s 'The Archaeology of the Montgomeryshire Canal'[1] includes some fine drawings of this aqueduct (and of other bridges on the canal). These show that the towpath is on a cast iron ‘shelf’ projecting inwards from the side wall, and supported by columns and struts, similar to the arrangement on Pontcysyllte Aqueduct. This facilitates displacement of water by boats.

Some of the details in the drawings are inevitably speculative, and the floor castings are shown as having vertical flanges for bolting to the side plates, while the long (transverse) edges are shown as butting against each other. Merely butting seems unlikely, due to the difficulty of sealing, and it is considered more likely that there are flanges along these edges, i.e. flanges on all four edges. This is the case for the floor plates at Pontcysyllte and Tone Aqueduct, for example.

Brithdir has some short flanges on the underside of the floor plates (see Photo 3), but these are of limited extent and their purpose has not been identified.

The book states that the clear span was reduced by the expedient of adding clasping masonry abutments to either end of the trough in 1890. It is also stated that subsidence of the trough is clearly shown by vertical joints between the cast iron side plates having closed at the top and widened to 2cm at the bottom.

Photo 4 does show a large divergence from top to bottom. However, there are some puzzling aspects to this. If a joint had separated by 2cm at the bottom, it implies that the bolts must have failed. This is possible, and the bolts could have subsequently been replaced and the joint caulked. However, the side plates are not just bolted to each other, but are also bolted to the floor plates of the trough. Presumably the floor plates did not separate or split, so did the bolts shear? If so, simply replacing them would not have been an option, as the holes would no longer line up. It is clear that the abutments have been altered using blue engineering bricks. However, if the diagonal struts beneath the trough (Photo 5) are original, the implication is that the abutments have not been extended out very far, otherwise the implied length of these struts would suggest that they were very 'spindly'. It does appear that the struts locate in pockets which are part of the trough's floor castings, suggesting that they are original.

Another odd feature is the unusually large gap (approx 1 inch) between the floor plates and the bottom flanges of the side plates (see Photo 3). The gaps would have been filled by some unidentified material, possibly rust cement. It appears (Photo 6) that additional caulking material (lead?) has been added in some places. A tentative explanation for the presence of these gaps will be offered, which might also explain the gap at the vertical joints which increases from small at the top to up to about 2cm (¾ inch) at the bottom:-

In producing the castings for the side plates, it would have been necessary to include a draft angle to the flanges to allow the wooden pattern to be withdrawn from the sand mould ready for pouring the iron. (In fact the draft could be avoided, but it would greatly complicate the moulding process). The presence of a draft angle could qualitatively explain the presence of the large gaps at the horizontal joints. It could also explain the presence of a tapering gap at the vertical webs, because the depth of the web, and hence the effect of the draft angle on the gap, increases from top to bottom. However, it should be noted that not all the vertical joints do have a gap as large as 2cm at the bottom.

These observations are not intended to challenge doubts about the aqueduct's stiffness, and in fact when G. W. Buck’s successor, James Sword, built a somewhat similar aqueduct in Welshpool - Lledan Brook Aqueduct - he opted for a narrower channel and supported the whole trough on cast iron I-section beams.

It appears that the Lledan Brook Aqueduct has narrower gaps between the flanges (Photo 8) compared with Brithdir. Note the presence of the shallowed tapered ridges in the horizontal flanges. Indicative of different foundry practice?