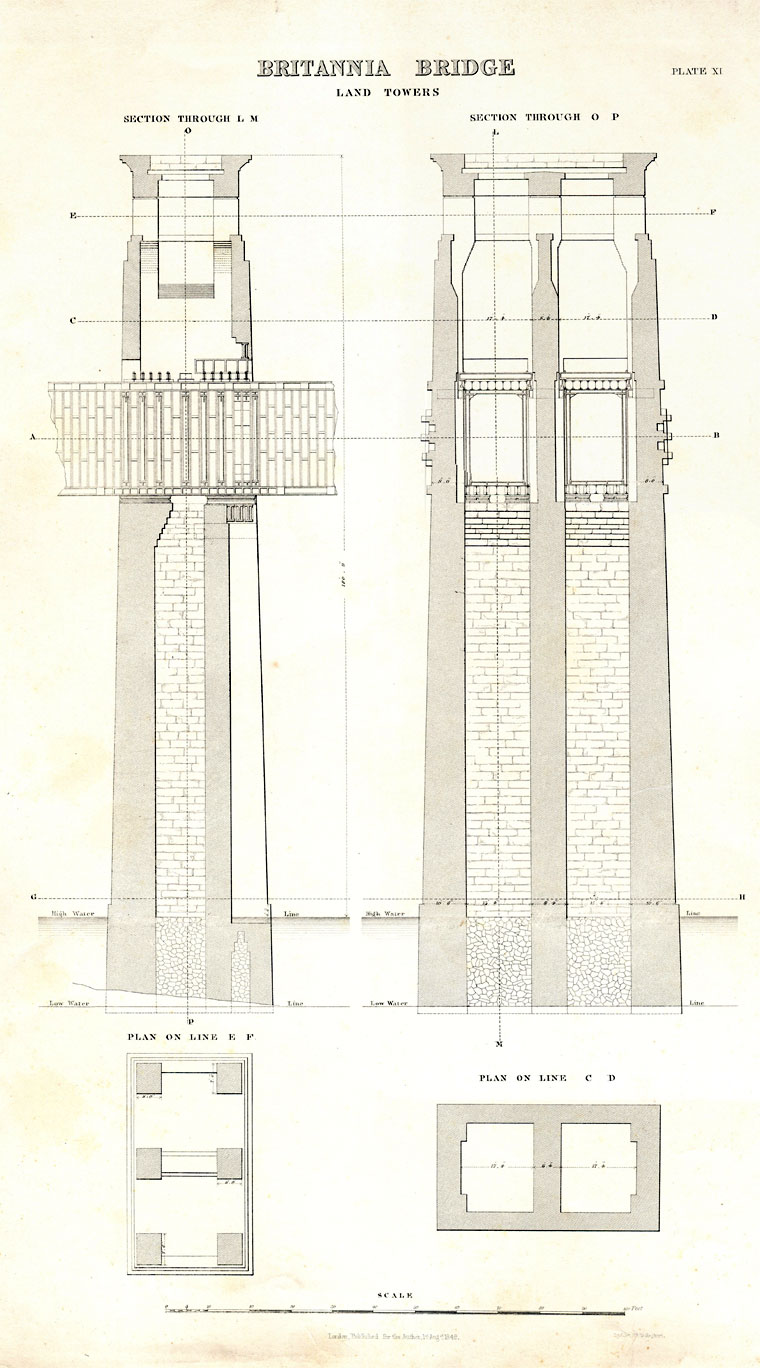 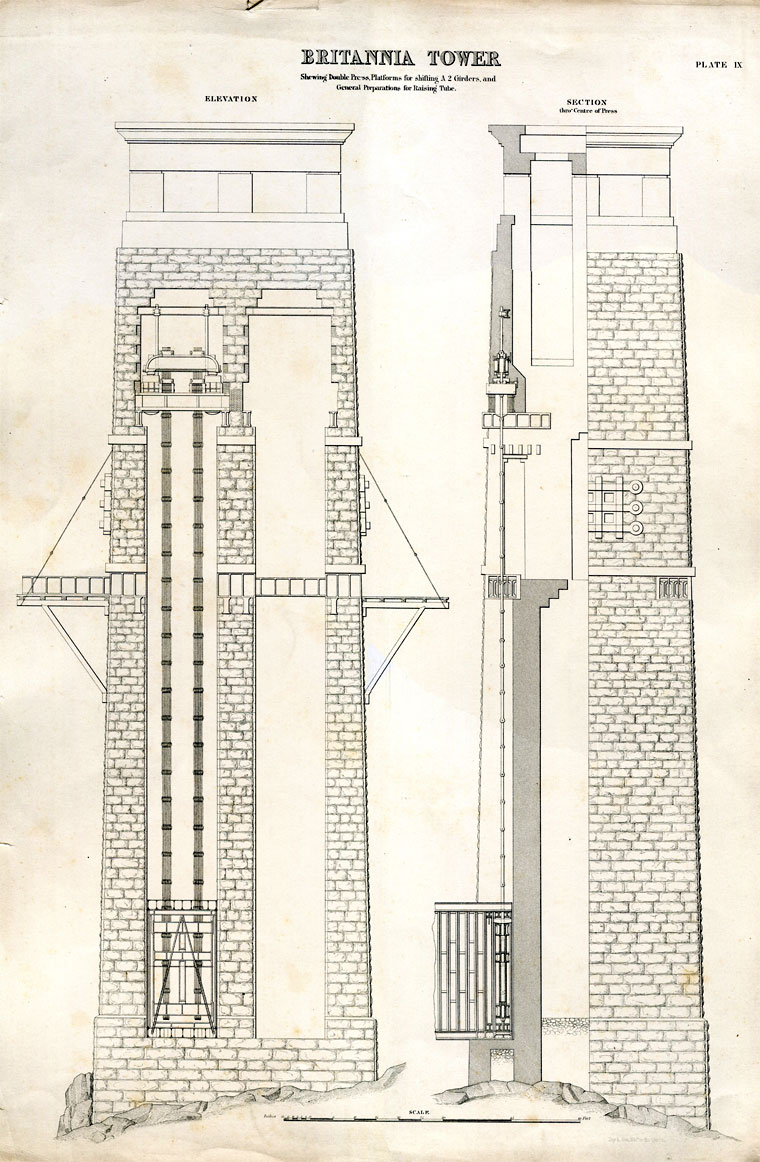 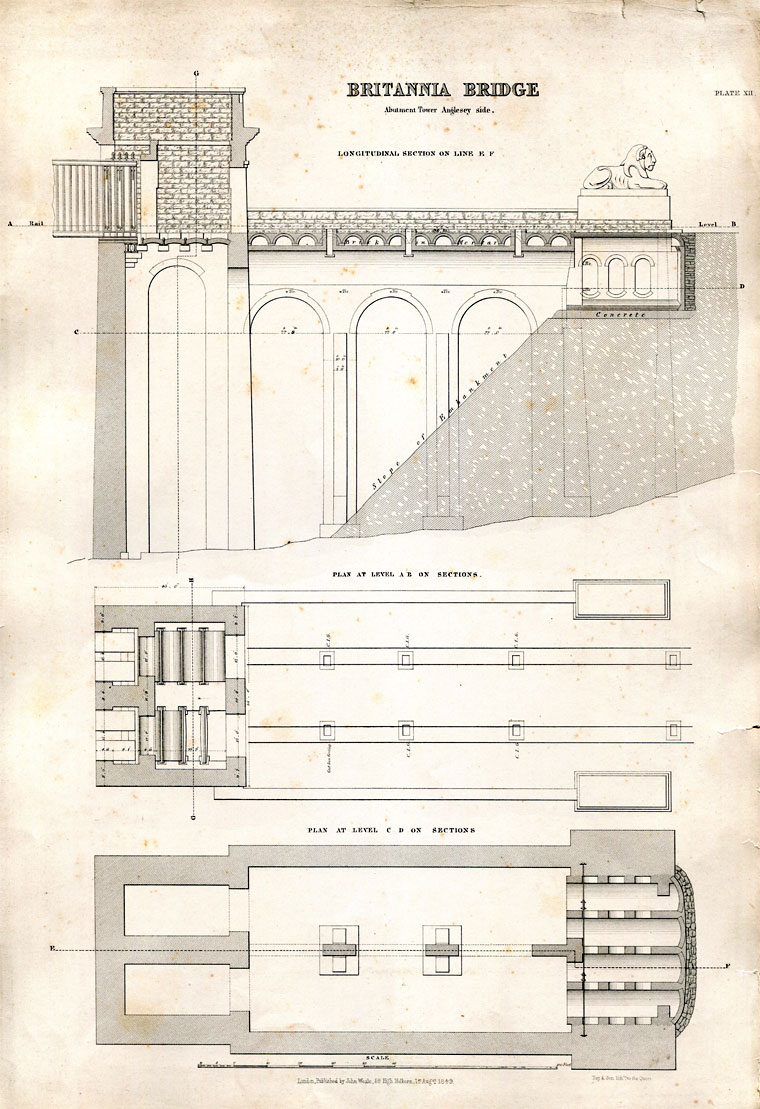 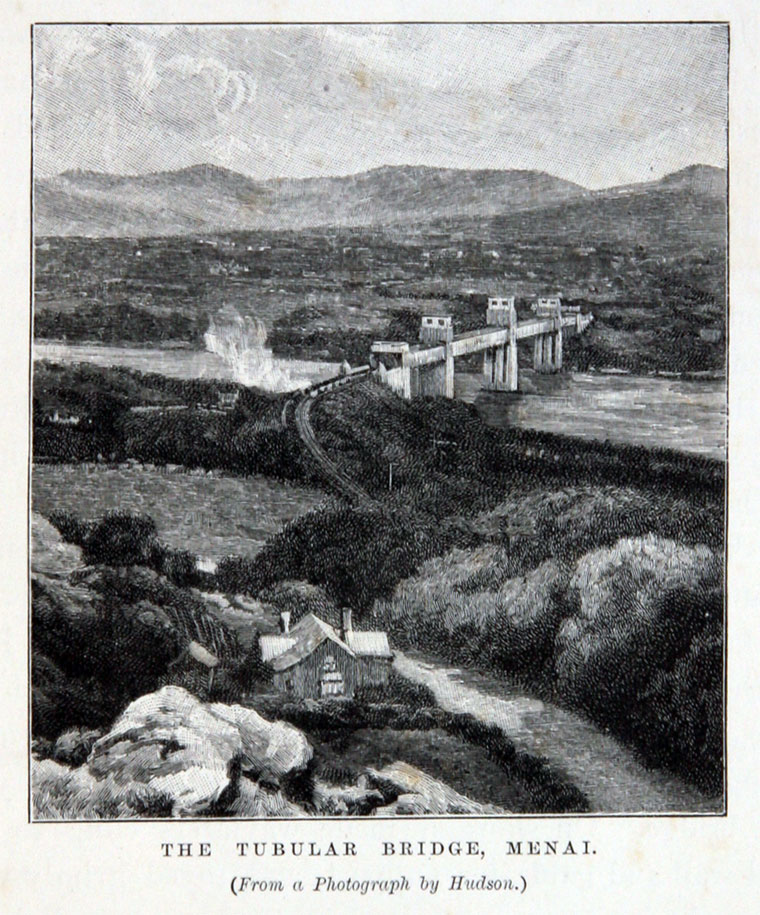 The Tubular Bridge. Picture published in 1894. 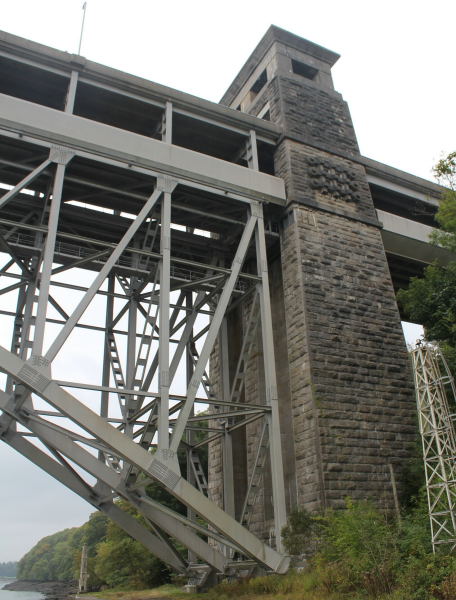 Note the two vertical recesses in the face of the masonry pier, behind the new steel columns. The ends of the original box girders entered these slots, and were then jacked up

After being jacked to the top, the end of the original box girder was supported on three cast iron I-beams located in cast iron box frames. To allow the girder to be raised it was necessary to partially withdraw these beams and support them on temporary platforms. Having raised the girder, they were then pushed into place, and the spaces in box frames filled with masonry. What we see here is a box frame 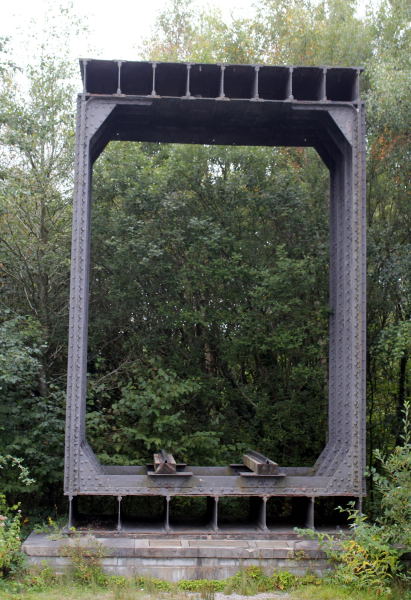 Cellular construction at top of girder. Cells 21" square - ample room for a boy and a rivet holder! 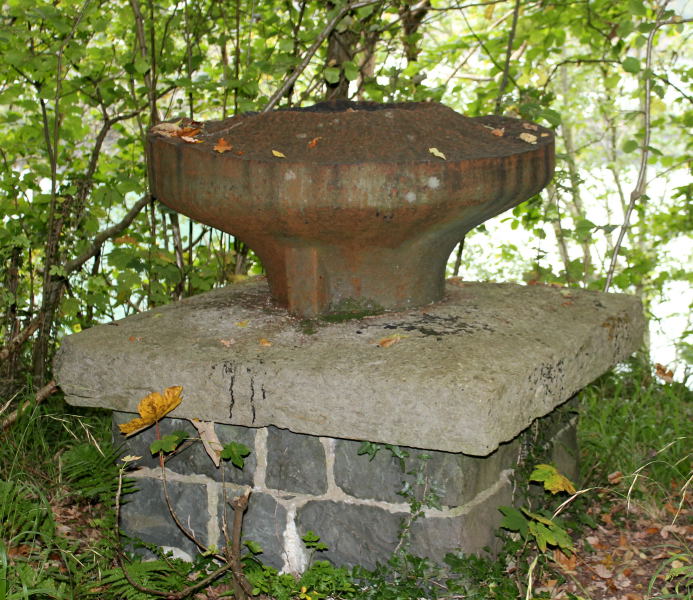 Base of hydraulic jack cylinder which fractured in 1850

Britannia Bridge is a bridge across the Menai Strait between the island of Anglesey and the mainland of Wales, originally a tubular bridge of wrought iron rectangular box-section spans, and now a two-tier steel truss arch bridge.

The opening of the Menai Bridge in 1826, a mile to the east of where Britannia Bridge was later built, provided the first fixed road link between Anglesey and the mainland. The increasing popularity of rail travel necessitated a second bridge to provide a direct rail link between London and the port of Holyhead for the Chester and Holyhead Railway.

Other railway schemes were proposed, including one in 1838 to cross Telford's existing Menai Bridge. Railway pioneer George Stephenson was invited to comment on this proposal but stated his concern about re-using the suspension bridge. By 1840, a Treasury committee decided broadly in favour of Stephenson's proposals, with final consent to the route including Britannia Bridge given in 1845. Stephenson's son Robert was appointed as chief engineer.

The design required the strait to remain accessible to shipping, and to be sufficiently stiff to support the heavy loading associated with trains, so Stephenson constructed a bridge with two main spans of 460ft long rectangular iron tubes, each weighing 1,500 tons, supported by masonry piers, the centre one of which was built on the Britannia Rock. Two additional spans of 230 ft length completed the bridge making a 1,511 ft long continuous girder. Up until then the longest wrought iron span had been 31 ft 6 in. The bridge was decorated by four large lions sculpted in limestone by John Thomas, two at either end.

Stephenson retained the services of two distinguished engineers as consultants. William Fairbairn was an old friend of his father. Eaton Hodgkinson was a leading theorist on strength of materials. Hodgkinson believed that it would be impractical to make the tubes stiff enough, and advised auxiliary suspension from chains. However, Fairbairn believed chains unnecessary declaring: "Provided that the parts are well-proportioned and the plates properly rivetted, you may strip off the chains and have it as a useful Monument of the enterprise and energy of the age in which it was constructed."

The consensus of received engineering opinion was with Hodgkinson, but Stephenson, rather nervously, backed Fairbairn's analysis. A 75 ft span model was constructed and tested at Fairbairn's Millwall shipyard, and used as a basis for the final design. Although Stephenson had pressed for the tubes to be elliptical in section, Fairbairn's preferred rectangular section was adopted. Fairbairn was responsible both for the cellular construction of the top part of the tubes, and for developing the stiffening of the side panels.

Begun in 1846, the bridge was opened on 5 March 1850. For its time, it was a bridge of "magnitude and singular novelty", far surpassing in length contemporary cast beam or plate girder iron bridges. One aspect of its method of construction was also novel; the box sections were assembled on-shore, then floated out into position before being lifted into place. In spite of the heavier loadings placed on it in its later life, the bridge was "one of the most easily maintained and successful railway bridges" in the UK, and "as the first really large wrought iron bridge of the girder type it has unique significance in civil engineering history".

Stephenson went on, in short order, to design the High Level Bridge in Newcastle Upon Tyne, which can be seen as a second and more elegant version of the Britannia Bridge, and influenced the design and the construction techniques employed by Isambard Kingdom Brunel in the design and construction of the Royal Albert Bridge across the River Tamar at Saltash; Stephenson's third tubular bridge was built on the York and North Midland Railway.

Before the bridge was completed, a dispute arose between Stephenson and Fairbairn, and Fairbairn resigned from the project. He took great exception to Stephenson denying due credit to Fairbairn and his associates, and published a book clarifying the position.[3]

Stephenson subsequently commissioned Edwin Clark to write an account from his point of view.

The dispute is thoroughly addressed in 'The Britannia & Other Tubular Bridges' by John Rapley [4]. This is an excellent book, which examines many aspects of the design and construction of this and other relevant bridges, and also gives due prominence to many of the subordinate engineers and scientists whose input has rarely received due credit.

A interesting aspect of the box girders for the Conwy and Menai bridges, addressed in the book, is that they were designed by Fairbairn on the basis of acceptable deflection when loaded. However, the question of stresses was not initially addressed. When bending stresses were calculated as construction proceeded, it was realised that they were too high. An urgent rethink was required, and an elegant solution emerged which avoided major redesign. This involved interconnecting each set of four box girders to produce a continuous beam, instead of having the individual girders effectively simply supported. This change took place after Fairbairn’s departure. John Rapley suggests that the proposal may have come from Edwin Clark, probably with the help of Charles Heard Wild.

However, no such option was available for the Conwy bridge, since each span consisted of a single box girder. As trains became heavier, it was eventually deemed necessary to provide additional supports beneath the spans at Conwy, and this was done in 1899.

Following a disastrous fire, the box girders were scrapped, and a new bridge was built having two decks to carry both rail and road traffic. The masonry piers have been retained, with extensive modification at the top end. The steel arch structure was utilised to support the original girders during dismantling. The monumental lions have also been retained, their expressions appropriate to their diminished prominence.

Following construction, the bridge became famous worldwide. Fortunately, a small section of one of the original box girders was saved, thanks to a subscription by employees of the companies rebuilding the bridge. They would probably be dismayed by the lack of prominence given to this preserved structure, and to another historically important artefact (the base of the hydraulic jack which failed during the raising of a girder in 1850, resulting in a fatality). These items are situated on the mainland shore, close to the west side of the pier. There are no signs to direct visitors to the site, but for those who do find their way there will find a good display board near the section of girder.

This pioneering bridge later came in for criticism, partly because of its uneconomic type of construction when compared with lattice girder bridges, and partly because of 'ergonomic' considerations (from the standpoint of those confined to travel in its dark, smoky confines). A good analysis of competing contemporary designs is available here[5]. However, had it not been (avoidably) susceptible to fire, its durability and maintainability would surely have continued to pay dividends in the long term.