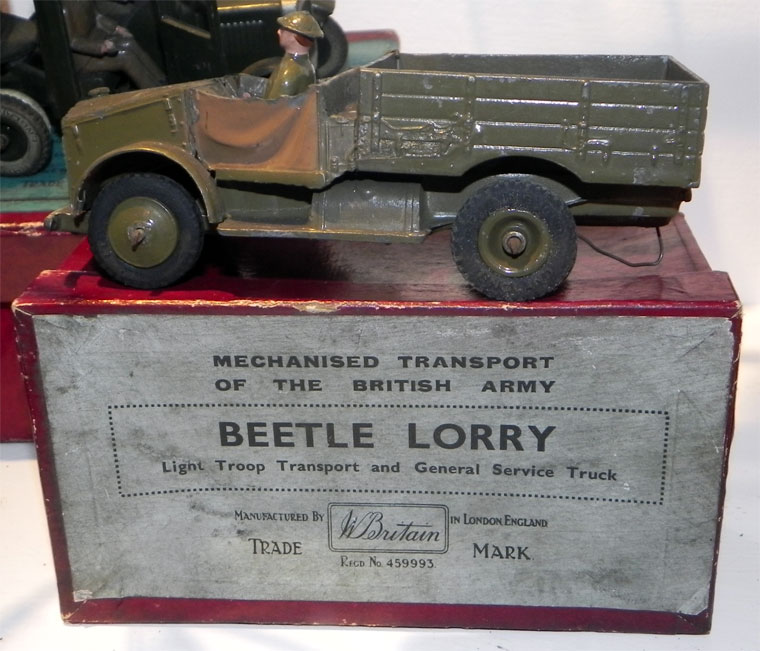 The W. Britain brand name of toy and collectable soldiers

1893 William Britain Jr., a British toy manufacturer, invented the process of hollow casting in lead, and revolutionized the production of toy soldiers. The company quickly became the industry leader, and was imitated by many other companies, such as Hanks Bros. and John Hill and Co. The style and scale of Britain's figures became the industry standard for toy soldiers for many years.

During the first half of the 20th century, Britains expanded its range and market.

By 1931 the firm employed 450 at its London factory. The catalogue had expanded to 435 sets and twenty million models a year were being produced.

By 1966 safety regulations in the United Kingdom combined with rising costs halted the production of lead toy soldiers. Britains shifted most production of Herald plastic to Hong Kong from 1966.

1984 The Britain family controlled the firm until 1984 when it was sold to a British conglomerate, Dobson Park Industries. They combined the operations with an existing line of toys and renamed the company Britains Petite, Ltd.

When production stopped, the range of catalogued lead sets exceeded 2200. In 1973 Britains introduced New Metal models, which are die cast in a durable alloy. Initially these sets were aimed at the British souvenir market. In 1983 Britains responded to a growing collectors market by introducing additional models and limited edition sets. This range was greatly expanded over the next 20 years and included die-cast versions of their old toy soldiers, some made from original moulds. These, as well as their lines of Deetail plastic figures and accessories, and their older sets have become highly collectable.

They are also known for their American Revolutionary War soldiers.

In 1997 Britains Petite, Ltd was bought by Ertl Company of Iowa, a maker of die-cast toys. Ertl was subsequently bought by Racing Champions, another American die cast model maker. At this time production of toy soldiers was moved to China.

In 2005, the W. Britains brand was acquired by First Gear, an American maker of die cast collectables. This firm produces and sells mostly contemporary matte-style figures to the collectors market under the W. Britain brand. Kenneth A. Osen is the Master Sculptor for W. Britain. All figures are sculpted by hand, to scale before duplicating.