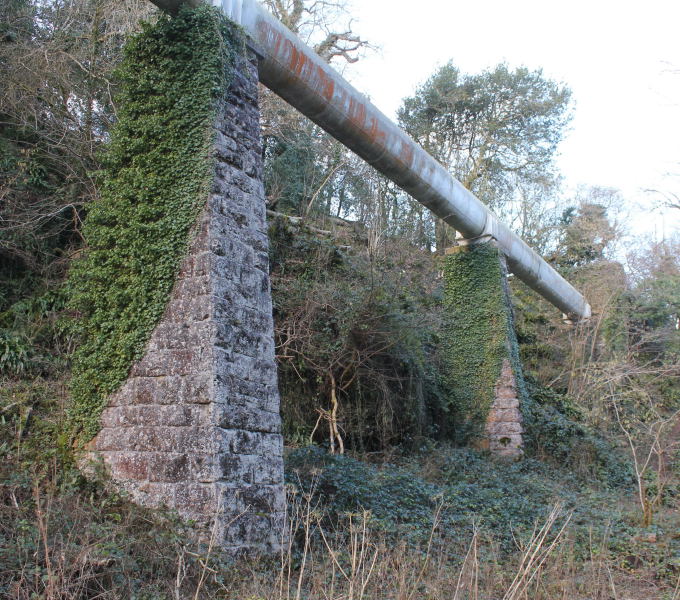 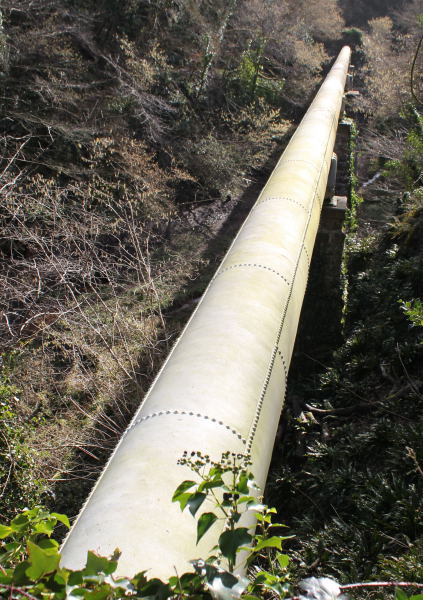 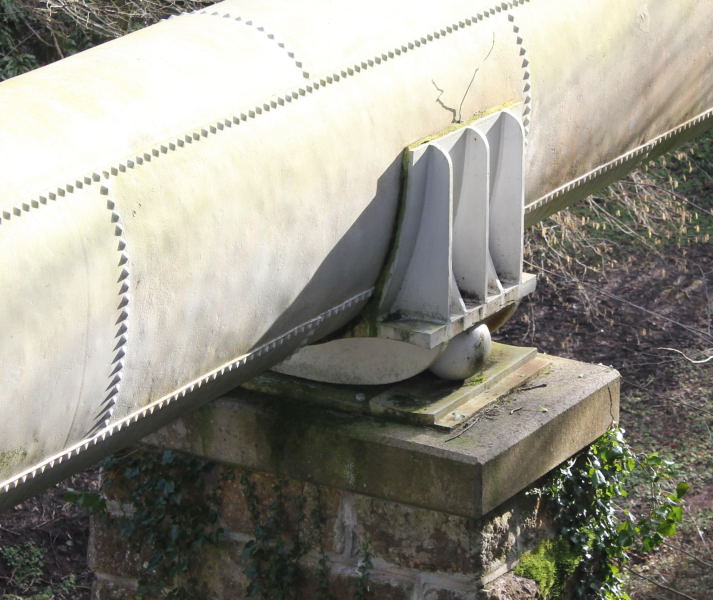 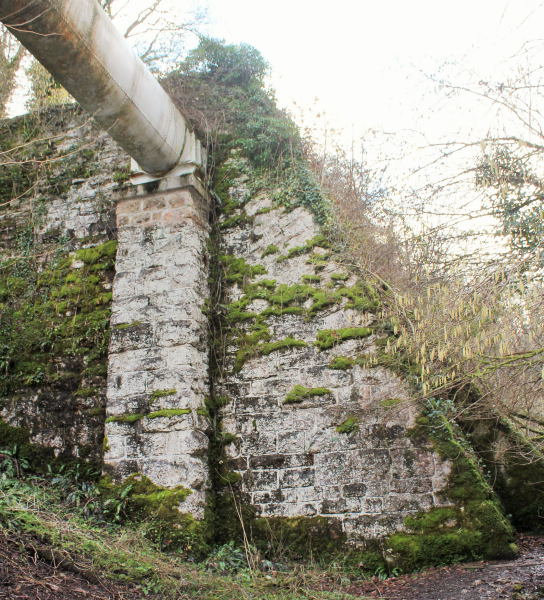 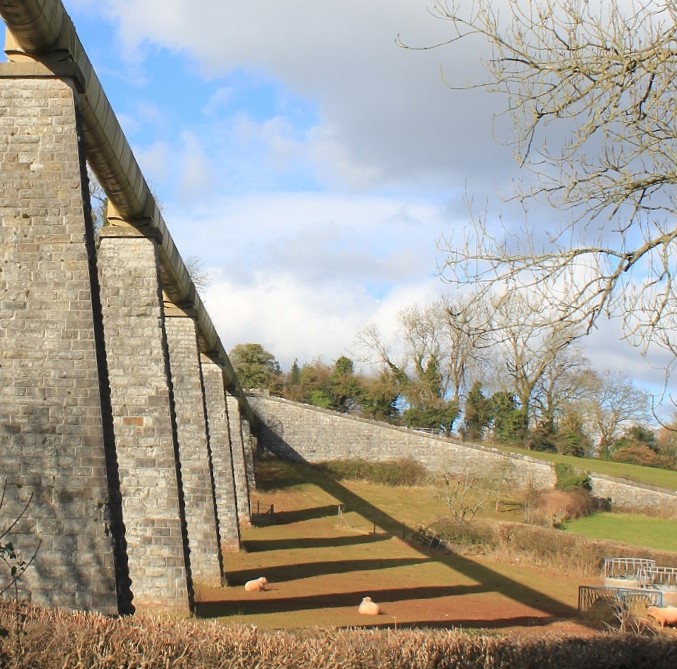 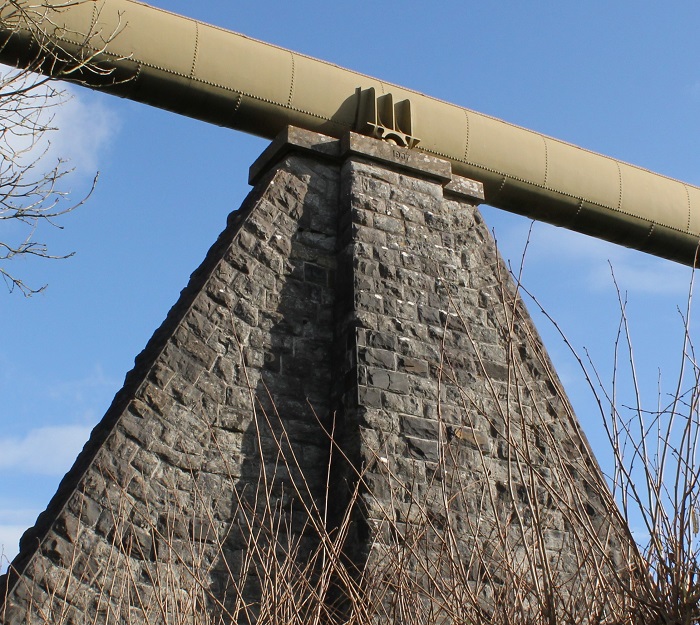 SW3. Buttressed central pier. Note how the courses of stonework change from horizontal to sloped. The date 1987 refers to the installation of the concrete cap 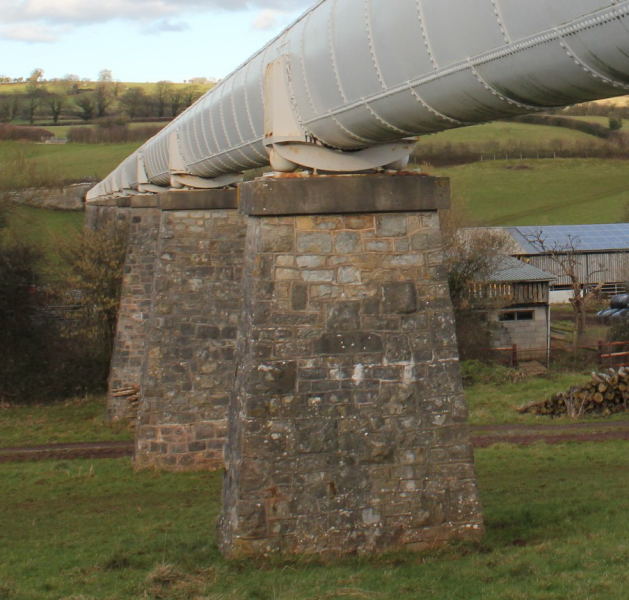 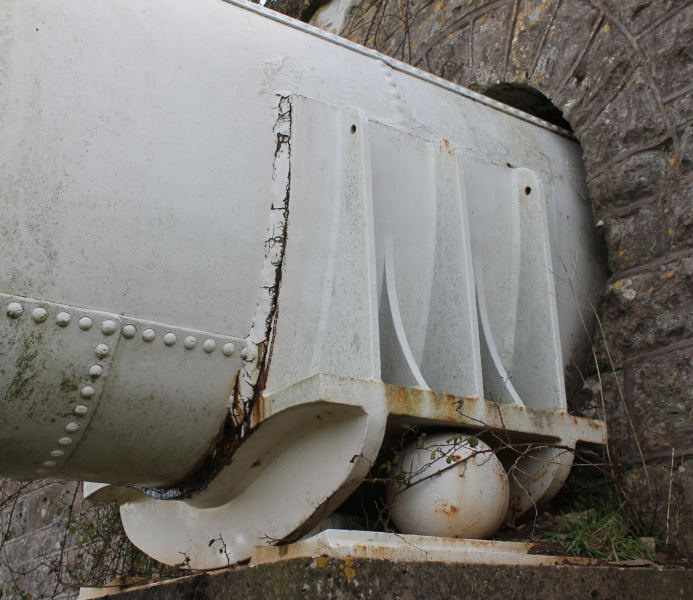 In the mid 19th century the rapidly growing city of Bristol had a desperate need for clean water. The springs of the Mendip Hills south of the city offered an excellent source of water, and it was decided to construct a series of aqueducts to carry spring water down to reservoirs (now known as the 'Barrow Tanks'). Work was put in hand in the late 1840s to tap this supply, with James Simpson as the Engineer.

The system remains in use today. The water is channelled mainly through tunnels cut through the rock and through buried pipes, and this great undertaking would escape public notice were it not for the presence of three impressive wrought iron aqueducts over valleys. Even these are little-known or appreciated. Many might consider them an ugly modern intrusion on an attractive landscape, but in fact they are by no means modern. They are historic engineering structures, being constructed in 1849-50 from riveted wrought iron plates. The plates are formed into closed ducts of ovoid section, and supported by masonry piers. The major (vertical) diameter is 4ft. 7in., and the minor diameter is 3ft 6in. The condition of the plates after nearly 170 years illustrates the superior corrosion resistance of wrought iron compared with steel. The bottom plates are 3/8" thick.

The course from the springs to the reservoirs involves hilly terrain, and in order to obtain the required gradient while minimising the use of aqueducts, cuttings, and embankments, the route follows the contours. The gradient is typically between 5 and 10 feet per mile. A continuous slope is required as the ducts do not run full and pressurised). An obelisk was erected at Breechy Hill to allow air to escape.

The highest spring is near Chewton Mendip, and the first iron aqueduct is in Harptree Combe. This was completed in mid-1849. It is 350 ft long and is approached by a covered masonry aqueduct with heavily buttressed walls (Photo H1). A number of masonry piers at 50 ft centres support the pipe via cast iron saddles. Each saddle sits on a pair of 1 ft diameter cast iron balls, which in turn sit on cast iron soleplates which have concave channels (Photo H5). This arrangement allows longitudinal expansion and contraction, and presumably allows limited amount scope for the pipe to deflect sideways if the sun heats one side more than the other. The central pier serves as the fixed point for the pipe, being heavily buttressed and having constrained ball bearings (see photos H7 & H8). Where the pipe enters and leaves the masonry parts of the aqueduct, the sealing is effected by a 10 ft thick collar of puddled clay (noting that expansion and contraction needs to be accommodated).

The next aqueduct, not illustrated here, is located just south of Winford, at Leigh Down Valley. It is much longer, at 825 feet. See photos SW1 - SW3

The last iron aqueduct is immediately east of Winford village. This is also 825 ft long, with 15 intermediate support piers. The pier stonework is not so roughly-hewn as at Harptree. The piers have concrete cap stones instead of stone.

The makers of the iron aqueducts have not yet been identified, but it is clear that the Harptree Combe and the Winford aqueduct ironwork was produced by two different makers. This is evident from differences in constructional details. The individual plates at Harptree are much longer than at Winford (approx 5 ft compared with approx 9 ft 6"). The rivets at Harptree have conical heads, which is unusual in British practice. A problem faced when making pipes or boilers from riveted plates is the need to avoid any leakage at overlapped joints, particularly where three plates meet. This necessitates a certain amount of tapering down at the edges of plates where they overlap. In photo W6 note how the vertical edge (extreme left) is flared out to obtain a gentle taper at the overlap. This flaring is not found on the Harptree duct.

Note that Photo W5 appears to show two horizontal layers of plate. In fact what we see is the effect of caulking with a special chisel to seal the edge of the plate.

To put the iron aqueducts in historic context, when they were built in late 1840s, the use of wrought iron plate to build large civil engineering structures was still in its infancy. Of course there was already a great deal of experience with the technology in other types of service, steam boilers and ships' hulls in particular. In 1845 Robert Stephenson had proposed spanning the Menai Straits and Conwy estuary with railway bridges having massive wrought iron tubes of elliptical cross section. That design was not pursued, rectangular tubes being used instead, with Conwy Railway Bridge and Britannia Bridge being opened in 1850. At about the same time, I K Brunel designed the Chepstow Railway Bridge (opened in 1852) which features large circular wrought iron tubes (which, incidentally, featured conical-headed rivets, as used on the Harptree aqueducts). The Mendip aqueducts are of course small in comparison, but they do represent a bold application of thin wrought iron plate as a speedy and economical alternative to other methods of crossing the valleys. A wise choice, too, given the long term durability, and hence economy, of the structures.