Note the 'joggled' ends of the diagonal channel iron members

Closer view, with a broken stump of one of the arch ribs visible just above the water level. Also, note how the masonry abutment has been widened for the 1883 bridge 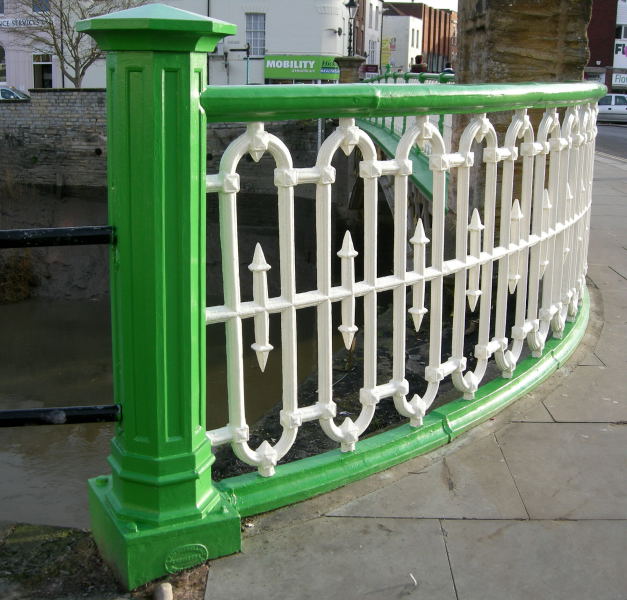 The cast iron bollard, and perhaps the rest of the balustrade, was made a few hundred yards away, across the bridge, by J. Culverwell

The current bridge had no particular claim for attention, but its appeal has recently been enhanced following refurbishment, the fresh paintwork drawing attention to the details of its construction.

The present bridge was opened in 1883. Unfortunately this required demolition of its cast iron predecessor, built by the Coalbrookdale Co (see below), although it has not disappeared without trace. The masonry abutments were retained, and the castings from which the five arch ribs were sprung remain in place. Also, the cast iron coat of arms is preserved above the entrance to the former Royal Clarence Hotel in the town.

The designers were R. C. Else and G. B. Laffan.

1798 'Bridgewater Bridge — 'This structure, which is principally composed of cast-iron brought in pieces from Coalbrook-Dale, Shropshire, by water carriage, is now pretty well completed : it consists of one arch, the span of which 75 feet ; the road-way is 24 feet wide in the clear, including two foot pave-ways ; it is lighted with six lamps. The expence of erecting the bridge is about 4000l. which was collected by additional toll on all the turnpikes leading to the town. The former bridge had stood 500 years, and was built by an ancient Lord of Bridgewater; the piers are not yet quite taken away. The iron-bridge is one of the handsomest in the kingdom.'[1]

1871 'On Sunday ..... In the evening the eteam tug Victor, whilst taking in tow the schooner Champion, backed against the iron bridge crossing the Parrett, broke off a large portion of the outside girders bearing the words "Cast Anno Domini 1795," which fell with a loud splash into the water.'[2]

1871 'At a meeting the Bridgwater Port and Navigation Committee yesterday, Mr. R. C. Else, civil engineer, reported that he had surveyed the injury sustained by the bridge crossing the river Parrett, and that it was not of a character to endanger the structure. It could easily be repaired, and the bridge was perfectly safe under the regulations already issued by the Mayor, to the effect that waggons were only to go over it at a walking pace, and that no waggon was to go over it having a load exceeding two tons. The work of repair will be commenced forthwith.'[3]

1882 'At a meeting of the Corporation on Friday, the tender of Mr George Moss, of Liverpool, amounting to £3,214 11s 4d, was accepted for the construction of a new wrought-iron bridge over the river Parrett, in the centre of the town, the iron work of the present structure to be disposed of to the contractor for £175, and the contractor undertaking to provide a wooden temporary bridge for the sum of £150.'[4]

1883 'OPENING OF THE NEW BRIDGE.—There was a grand ceremonial here on Monday, the occasion being the formal opening of the newly-constructed bridge over the Parrett. The bridge, which was designed by Mr. R. C. Else, C.E., of Bridgwater, is 75 feet span and 36 feet wide in the clear, having two footpaths each six feet wide. It consists of seven wrought-iron arched ribs drawn together by transverse and diagonal braces, and rests upon, and is built into, masonry abutments. The panelling consists of ornamental cast-iron railings, fitting into Ham Hill masonry piers each end, and surmounted with cast-iron lamp brackets carrying Sugg's patent lanterns and burners. The road is practically level, only rising six inches in the centre of the bridge, and the new bridge is 12 feet wider than the old one. To celebrate the opening the tradesmen generally closed their establishments,....'[5]