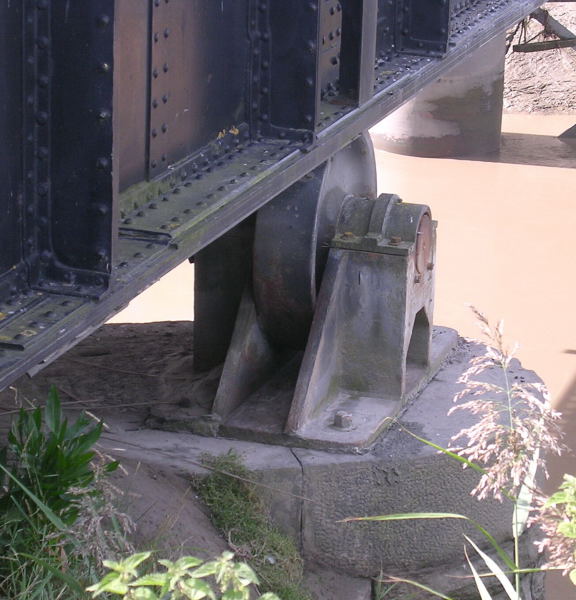 6. Note extra plates on top flange, at position where stress would be greatest when retracting bridge 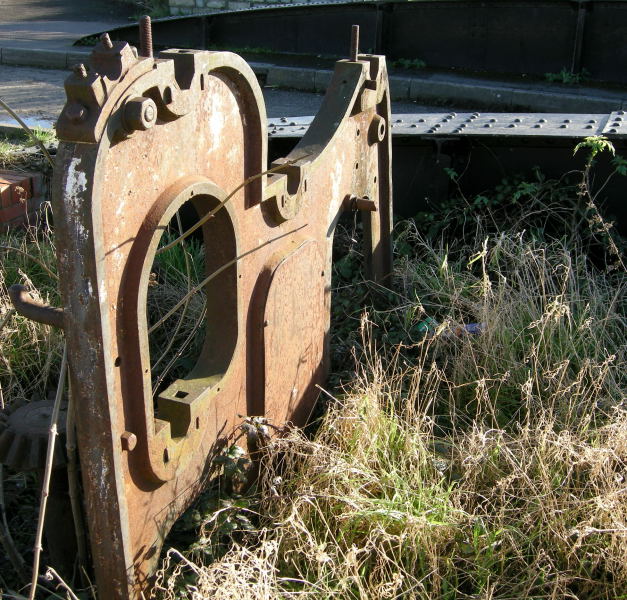 Also known as the Black Bridge. Black it is, and it was 'telescopic' in the sense that it could be withdrawn into a recess after another section of the bridge was moved sideways to allow the section which spanned the River Parrett to be drawn back. The principle of this retractable bridge is well illustrated here [1]. The bridge is no longer required to move, and serves as as a footbridge.

The bridge, opened in 1871, was an ingenious solution to the problem of allowing rail traffic access to the floating dock at Bridgwater, while still allowing shipping to use the short stretch of tidal river downstream of Bridgwater Town Bridge.

After closure, British Railways set about scrapping the bridge, disregarding its historic interest and rarity. Fortunately the main span was saved following a public outcry, and is now Grade II* listed. The side-shifting span was cut up, and the engine partly destroyed. Fortunately part of the engine frame survives in situ (see photos), while the boiler and one of the cylinders were rescued and donated to Westonzoyland Museum. A bevel gear and shaft make an occasional appearance in the river when the tide is low.

A Paper by the Somerset Industrial Archaeological Society (SIAS)[2] includes two photos of the bridge, one taken in 1974 when the transverse-moving girders were being cut up, and another taken in 1982 when the vacated pit was excavated, revealing the mitred end of the retracting span and the adjacent wheels. It also shows the wheels on the end of the moving section, these having double flanges, as on crane wheels. At the bottom of the 1974 photo a rack can be seen, presumably one of two (or more) used for moving the deck sideways. Judging by the under-floor girders in the 1974, the bridge was optimised for 7 ft gauge, with provision for standard gauge, offset to the north.

The bridge connected the floating dock and industries on the west side of the river with the main railway systems to the east. The area was still the scene of much industrial and maritime activity. Today the area near the bridge is just a generic industrial and retail estate, and it is difficult to envisage the network of railways which were once here, the bridge providing access to potteries, brewery, coal yards, saw mills, a cattle feed mill, warehouses, and the docks themselves. Fortunately, the wet dock and some interesting remnants of its infrastructure have survived, including a hand crane, large warehouses, and working feed mill.

The bridge was designed by Francis Fox (1818-1914) (not Sir Francis Fox) for the Bristol and Exeter Railway.

The main span was 127-feet (39 m, and the approach section was 80-feet (24 m) long. It was manually operated for the first eight months, and then powered by a steam engine. The bridge was taken over from the Bristol and Exeter Railway by the Great Western Railway in 1876.[3]. The contract for the masonry was let in 1869, and the bridge opened in 1871.

The masonry was built by Warburton Brothers Ltd. of Bristol and the ironwork by Lloyds, Foster and Co. of Wednesbury

The bridge and the engine-gearbox unit were photographed by George Watkins in 1962, His photograph and descriptive text provide useful information about the machinery. This evidence, together with a look at those remains which escaped the sledge hammer, will be used to explore the method of operation.

The steam engine itself was quite a small, simple machine, having two vertical cylinders, 7" bore and 9" - 10" stroke, with slide valves. The rest of the machine above ground comprised cast iron side frames attached to a base plate, and spur and bevel gears, much akin to the machinery of a steam crane

Photo 7 above was taken from the same viewpoint as that used by G Watkins. It shows the one surviving side frame of the engine. Now, referring to Photo 8: on top of the frame, the bearing recess on the extreme right supported the engine crankshaft. The cylinders were mounted vertically below the disc cranks. Below this bearing, and just above the hole in the frame, is a broken portion of a pillar which supported the crosshead guide.

The next bearing recess, at the top centre of the frame, supported a layshaft having a large diameter gearwheel just inboard of the frame. At the other end of this layshaft was a small pinion. This pinion drove a large wheel, mounted on a shaft supported by a bearing whose housing can be seen at the bottom of the large hole in the frame. The reduction provided by these two sets of gears was probably about 15 - 20 to 1. G Watkins gave the engine speed as 120 rpm, so the estimated final drive speed would be about 6 - 8 rpm.

G Watkins stated that the final drive from the engine to the machinery was by bevel gears. We can see a driven bevel gear on a vertical shaft in the Photo 9, together with another vertical shaft which presumably had its own bevel gear.

GW notes that reversing was obtained by the use of sliding bevel gears and dog clutches. There would be two opposed bevel gears running freely on the drive shaft, permanently engaged with the driven bevel gear. A sliding clutch member is located between the pair, keyed to the drive shaft, and power is transmitted when the clutch is slid into engagement with one or other bevel gear. This gives either forward or reverse motion to the vertical shaft. It would have been preferable to use friction cones rather than dog clutches, similar to the arrangement often found on steam cranes. With friction cones, each cast iron bevel gear has a female conical portion, ready to be driven by the sliding male cast iron conical clutch member. Friction cones would avoid shock loading which could arise with a dog clutch when the dogs engaged (not to mention avoiding any delay before the dogs did engage, noting the slow speed of the shaft). However, there was evidently no provision to force the levers into engagement, ruling out the possibility of friction cones.

GW's photo shows a horizontal spindle heading into the bevel reversing gear housing, with two levers 180 degrees apart. Presumably these levers were on separate (coaxial) shafts to work two sets of reversing gear (one for each vertical shaft). It is not clear how power was transmitted to the other vertical shaft.

In Photo 9, there is a hook bolted on to the frame (RHS of picture). Far stouter than needed to support saplings, its intended use is not known, although its appearance would be consistent with the use of a large crowbar

On top of the side frame, near the camera in Photo 7, is another bearing housing cast into the frame. GW's photos show that this was for a hand drive shaft, whose pinion engaged with the first reduction wheel, i.e. with the wheel on the layshaft driven by the crankshaft pinion. His photo also shows an additional hand drive shaft, located in the plummer block bolted to the top of the frame, its pinion driving a wheel on the first hand drive shaft to give a reduction of 2:1. It is clear that this is an afterthought, the plummer block being separate from the frame casting and having a curved base. Also, it is secured by bolts tapped into the frame casting (at odds with the efforts made elsewhere to avoid tapped holes - note the holes provided in the other bearing housings for cotters). GW's photo shows that by 1962 the additional hand drive shaft had a bracket bolted to it to support the steam supply pipe, so clearly the extra shaft had become redundant by then!

The prospect of hand winding the bridge girder was not to be relished, and the waiting ship's crew must have hoped that it was completed before the tide turned again!

The two vertical shafts would have gone below the floor to drive (a) the pinions which traversed the sideways-moving section via racks, and (b) gearing to drive the drum for the chains which retracted and returned the main deck. G Watkins noted that there were interlocks which were linked to the railway signals and which also prevented the two moveable sections being moved at the same time.

GW's photo shows a small handle below the reversing levers, which probably worked the cylinder drain cocks. The steam supply to the engine was controlled by a simple globe valve whose operating spindle extended beyond the LH side frame. However, this valve was on the opposite side of the engine, and could not be reached from the reversing levers.

Photos 1, 2 & 3 show the rollers supporting the bridge. Between the outer rollers in Photo 3 there is another roller, which presumably supported the chain. If so, it may have lost its flange on one side.