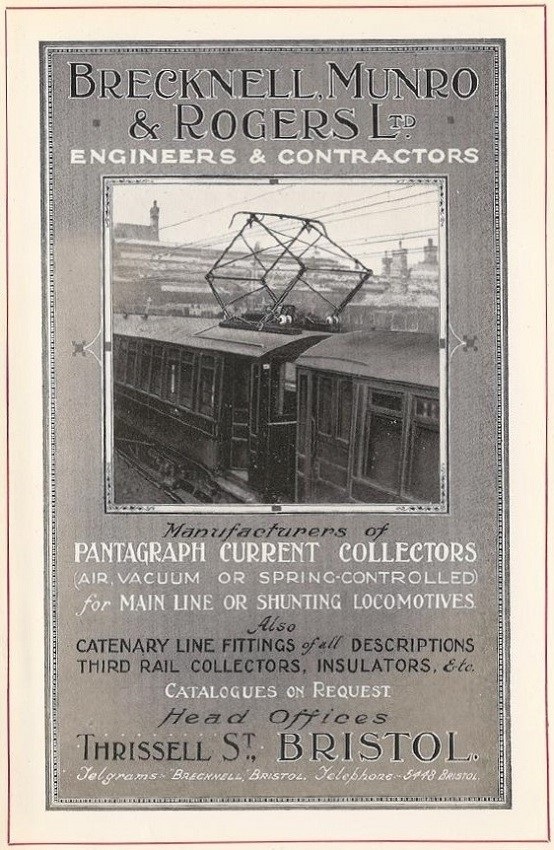 Starting as a small non-ferrous foundry the company has become precision engineers.

1877 Henry Brecknell became sole proprietor of the family firm under the name of H. Brecknell and Son.

1896 Brecknell was joined in partnership by Edward May Munro and Hugh Innes Rogers, carrying on the business under the style of Brecknell, Munro and Rogers, Ltd., first at Lawrence Hill and later at Thrissell Street, Bristol, as mechanical, electrical, and tramway engineers.

Arnold Morley Willis, having started as a pupil with the firm, worked in many parts of the world on power stations, electric traction systems, and overhead lines.

Subsequently the firm also produced specialised machines for food packing, egg-grading, laundry-marking and printing-machines of the stop cylinder type, as well as the ticket-issuing and change-giving machines used on London Underground stations.

1928 Brecknell, Willis and Co was separated from Brecknell, Munro and Rogers to take over the company's electrical engineering activities. Presumably Thrissell Engineering Co was formed at the same time to develop coin-operated machinery. Brecknell, Dolman and Rogers was formed as a Private company but unsure about its connection with the others.

1945 Brecknell, Munro and Rogers applied for an extension of the 1928 Patent granted to Henry Dolman and Thrissell Engineering Co[2]