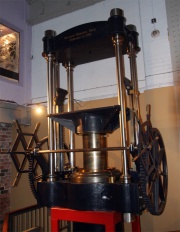 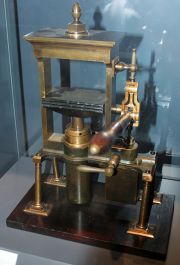 c.1807 working (demonstration?) model of hydraulic press at the National Museum of Scotland. The inclined Tuscan columns were characteristic of Henry Maudslay's work, although he had left Bramah's employment a decade earier 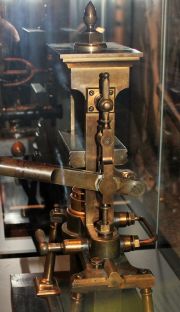 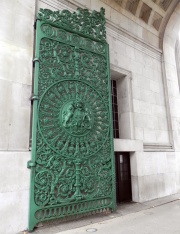 The gates at Wellington Arch, London produced by the company. 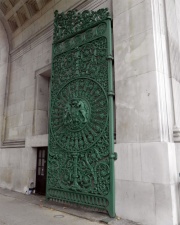 The gates at Wellington Arch, London produced by the company.

The gates (detail) at Wellington Arch, London produced by the company.

of 7 Goodge Place, Fitzrovia, London, W1T 4SF. The showroom had for along time been at 128 Piccadilly, London

Famous for their locks, also a hydraulic press, a type of flush toilet, and other inventions including some which were eventually handled by subsidiary and spin-out companies.

Partly due to the precision requirements of his locks, Joseph Bramah developed many tools to improve various manufacturing processes. He relied heavily on the expertise of Henry Maudslay whom he employed in his workshop from the age of 18. Just before Bramah died, his workshops also employed Joseph Clement who among other things made several contributions in the field of lathe design.

1790 the company famously had a "Challenge Lock" which was displayed in the window of their London shop from 1790 mounted on a board containing the inscription: The artist who can make an instrument that will pick or open this lock shall receive 200 guineas the moment it is produced. The "Challenge" withstood attempts to open it for over 60 years.

1815 Wharves, warehouse and manufactory, leased by Joseph Bramah on the banks of the Thames near Vauxhall Bridge, were advertised for sale in part or as whole by order of the executors of his estate. As well as buildings, a 8 h.p. engine and a 12 h.p. engine, and machinery for sawing deals and stone, cutting wood, grinding mill for glazing bars, with connecting machinery invented by Mr Braham were included in the sale [5]. Similar advert in March 1816. The business had a counting house in Pimlico.

1817 The works in Belgrave Place, Pimlico were described as 'the manufactory of the ingenious Bramah, whose locks baffle knavery, and whose condensing engines promise such important results to philosophy and the mechanic arts'. These works were 180 feet in length and were destroyed by a fire in 1843.[6]

1818-20 Name changed to J. Bramah and Sons; addresses: 14 Piccadilly and of Pimlico were given on accounts that the company submitted[7].

1825 Receipted bill from J. Bramah and Sons, Piccadilly to Mr Martin (for Lord Willoughby de Broke) for new and replacement locks for furniture, doors and windows[8].

1824-27 Letters from Joseph Bramah and Sons of London, concerning the treadmill, well and pumping engine for Norfolk County Gaol[9].

1826 Timothy Bramah wrote to the Times on behalf of J. Bramah and Sons and Self, Pimlico, challenging a report that a Braham lock had been picked[10].

1828 A letter to the Times referred to the large amount of cast iron Bramah and Co had manufactured for the roof of London University[11]. As this letter was from a third party, it does not necessarily indicate the legal name of the company, rather the familiar name of the business.

1830 Dissolution of the Partnership carried on under the firm of Joseph Bramah and Sons, at Pimlico and Piccadilly, in so far as regards Timothy Bramah; the business would be conducted in future under the same firm by Francis, Edward, and John Joseph Bramah[12]

1836 Lease from F. Bramah to F. Bramah junior and John T. Prestage [16]. Around this time there seems to have been a separation of the business into various separate enterprises; presumably this marked the beginning of Bramah and Prestage.

1837 Francis Bramah wrote a paper on experiments on the strength of cast iron girders [17].

1839 Charles Fox entered into partnership with Francis Bramah to form Bramah, Fox and Co [19]. This seems to have handled the civil engineering side of the Bramah business.

At some point John Joseph Bramah is reported to have taken over his deceased uncle's business. He was said to possess his uncle's business skills and love of mechanisms if not his inventiveness. He gathered together a huge business in railway plant at Pimlico, with the help of George and Robert Stephenson, and subsequently transferred it to Smethwick as the London Works, joining himself with Charles Fox and John Henderson as partners[24].

1845 John Joseph Bramah of Ashwood House, Kingswinford purchased Horseley Ironworks and will put them into full operation, according to the Wolverhampton Chronicle [25].

1848 Tipton. Horseley Ironworks, belonging to Messrs. Bramah and Co, are also extensive (not sure of the source of this).

1851 The "Challenge Lock" stood for over 60 years until, at the 1851 Great Exhibition an American by the name of Alfred Charles Hobbs was able to open the lock and, following some argument about the circumstances under which he had opened it (which continued for several years), he was awarded the prize. Hobbs attempt still took him some 45 hours, spread over 16 days. The Challenge Lock (or at least a version of it, as it was probably updated over time) still resides in the Bramah shop in London.

1870 J. T. Needs described as “late 'Bramah” in connection with a case involving locks in the police court; the address of the business was 124 Piccadilly[27]

1873 Hayward, Tyler and Co, licensees of the Bramah patent for soda water machine, were described as successors to celebrated Bramah[28].