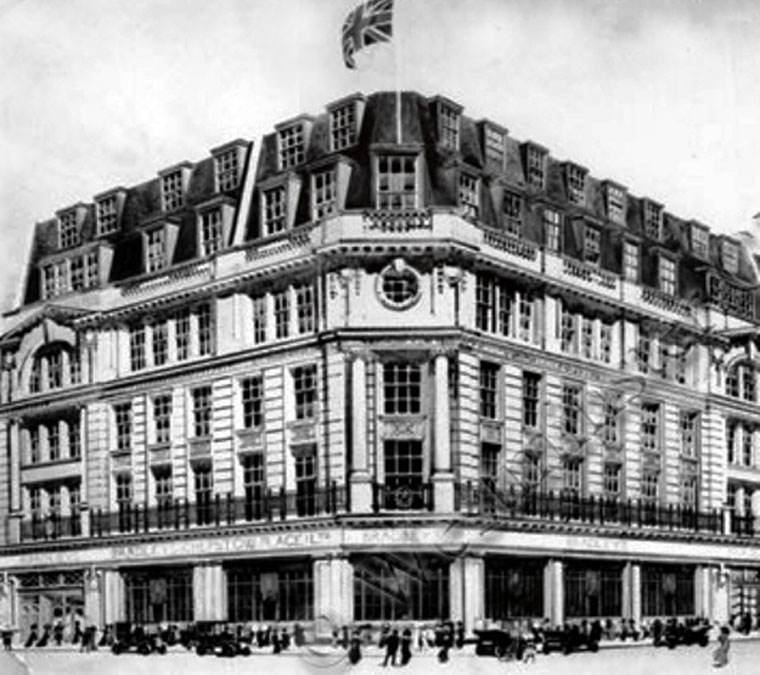 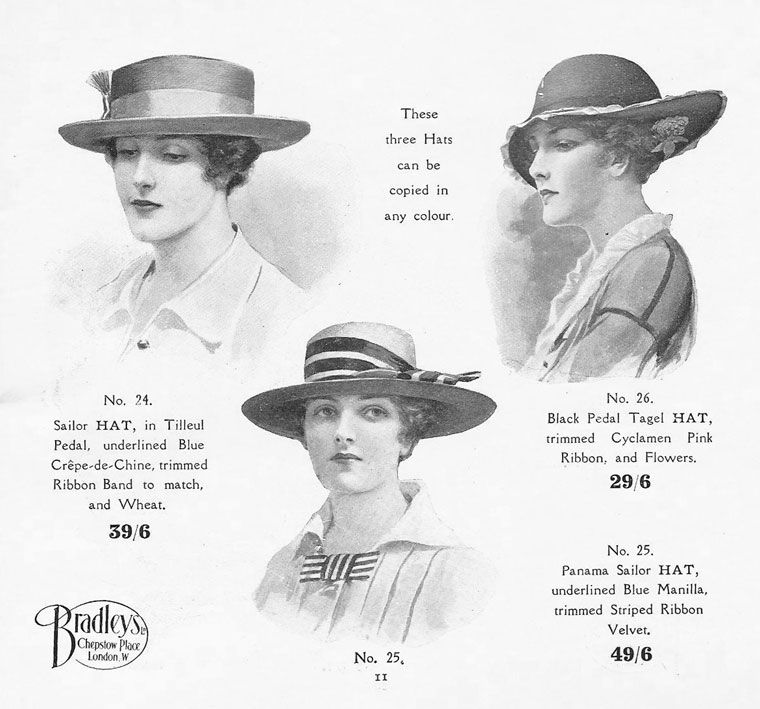 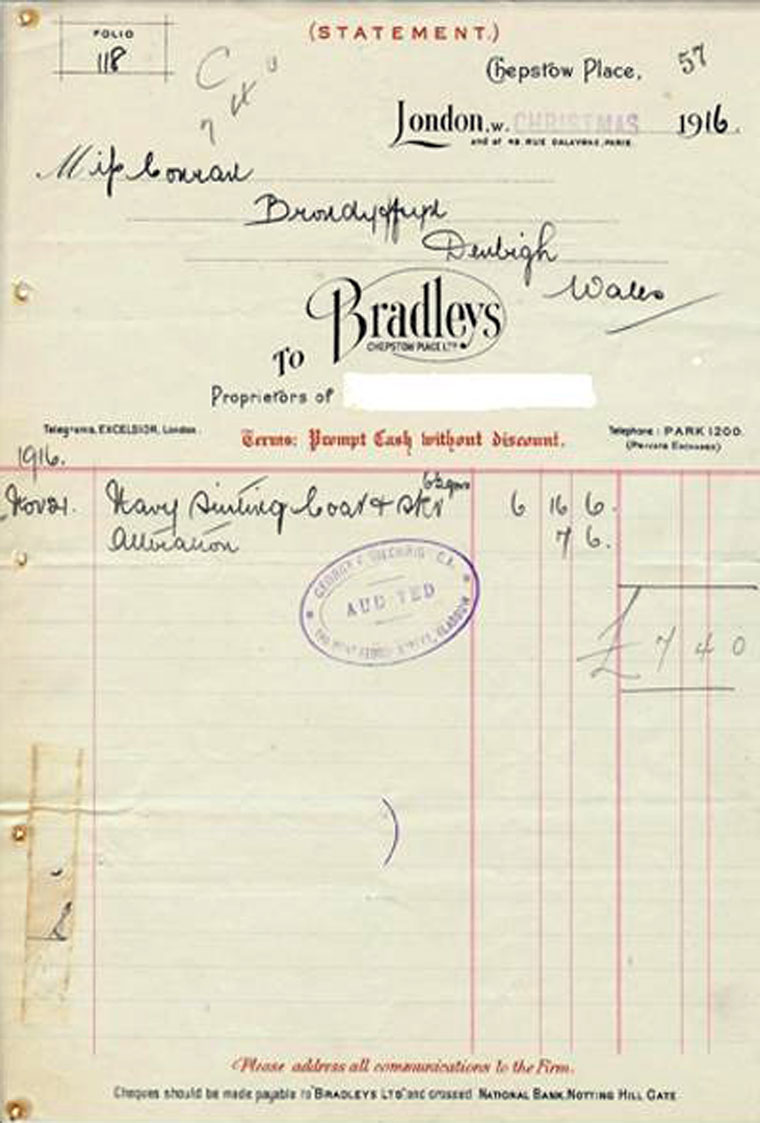 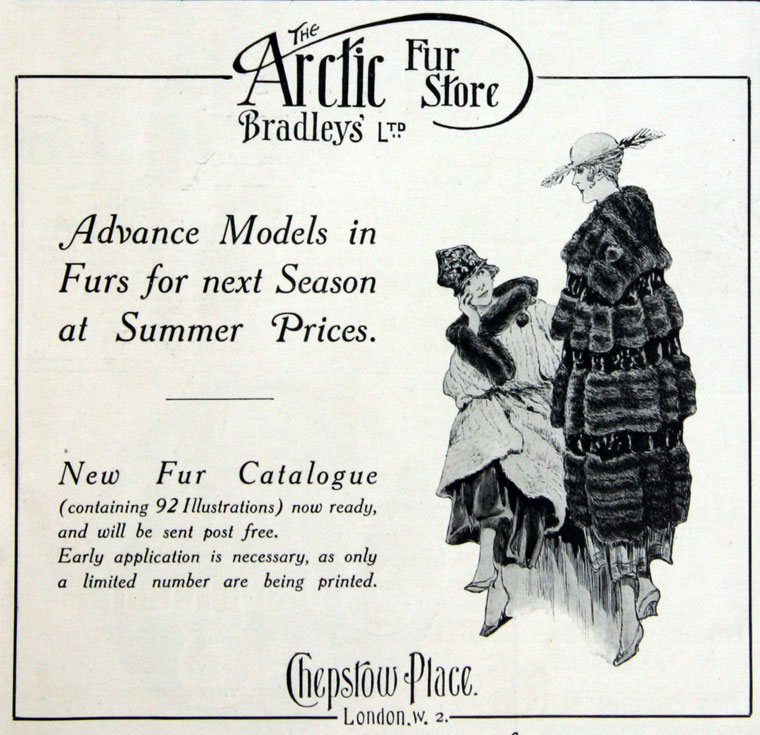 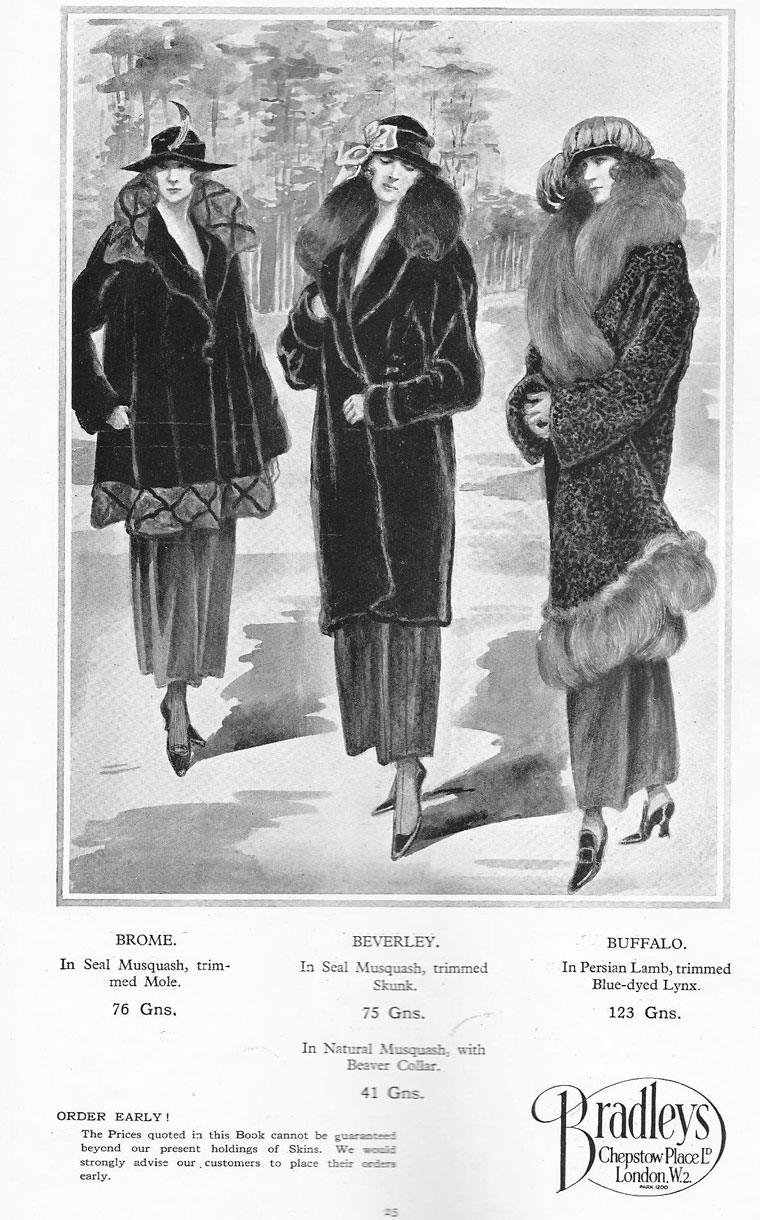 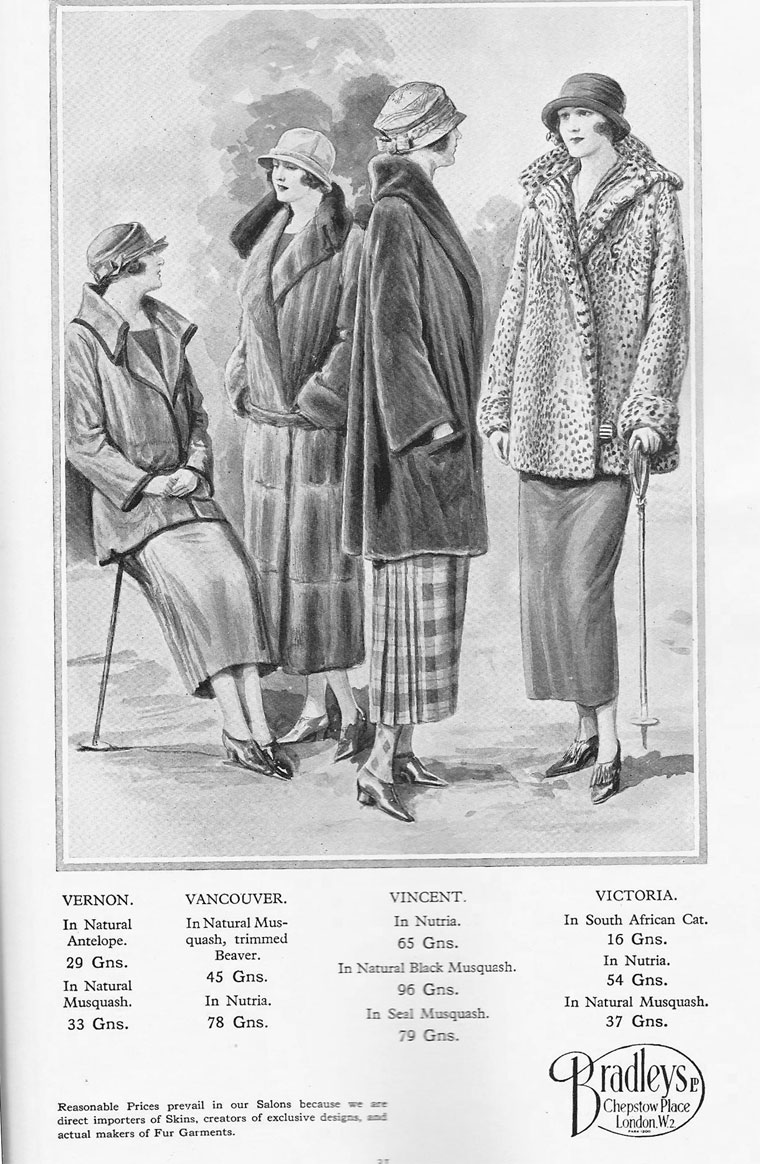 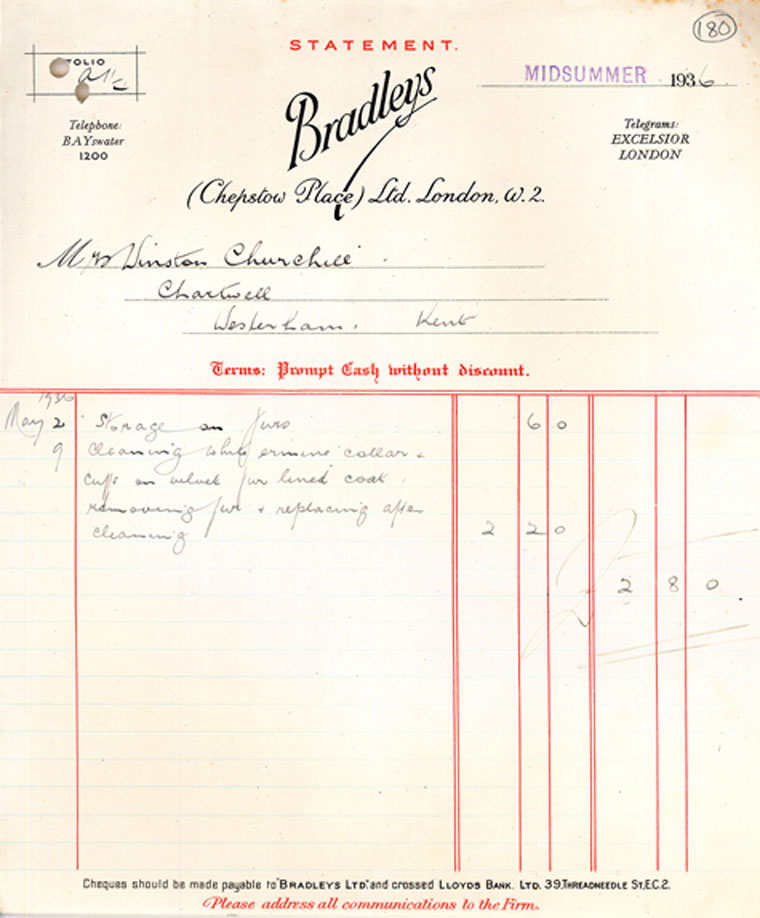 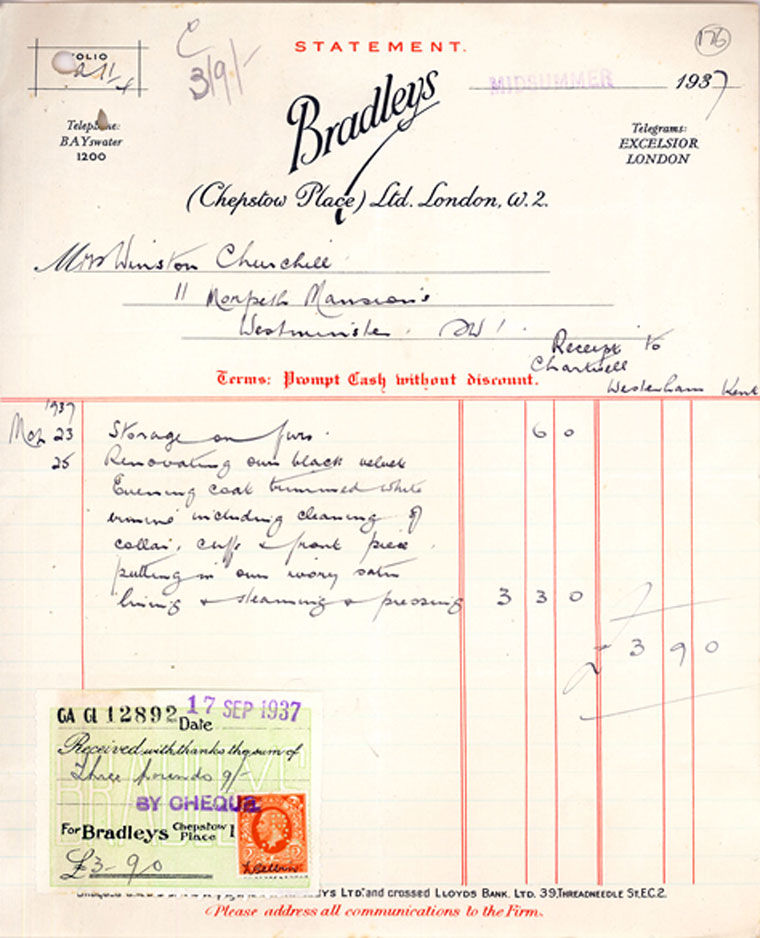 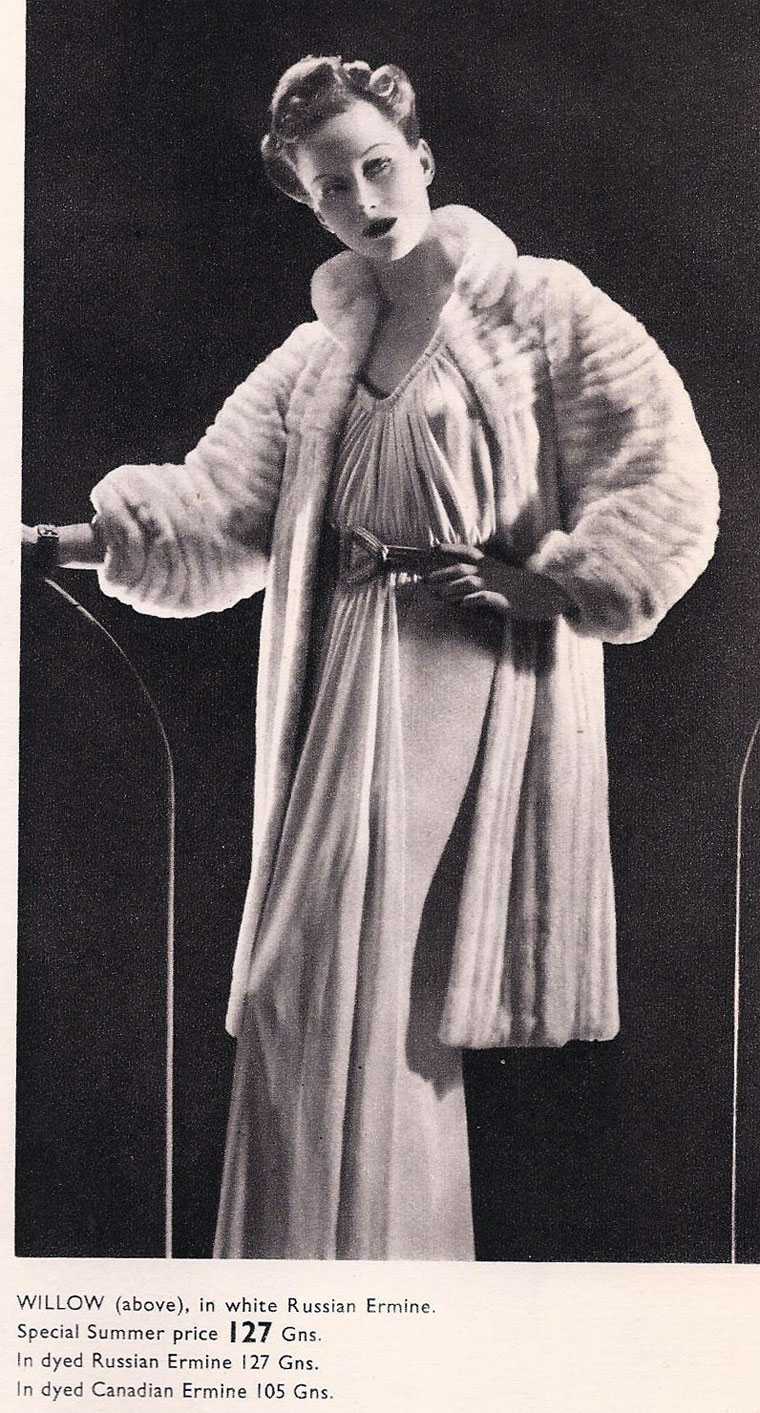 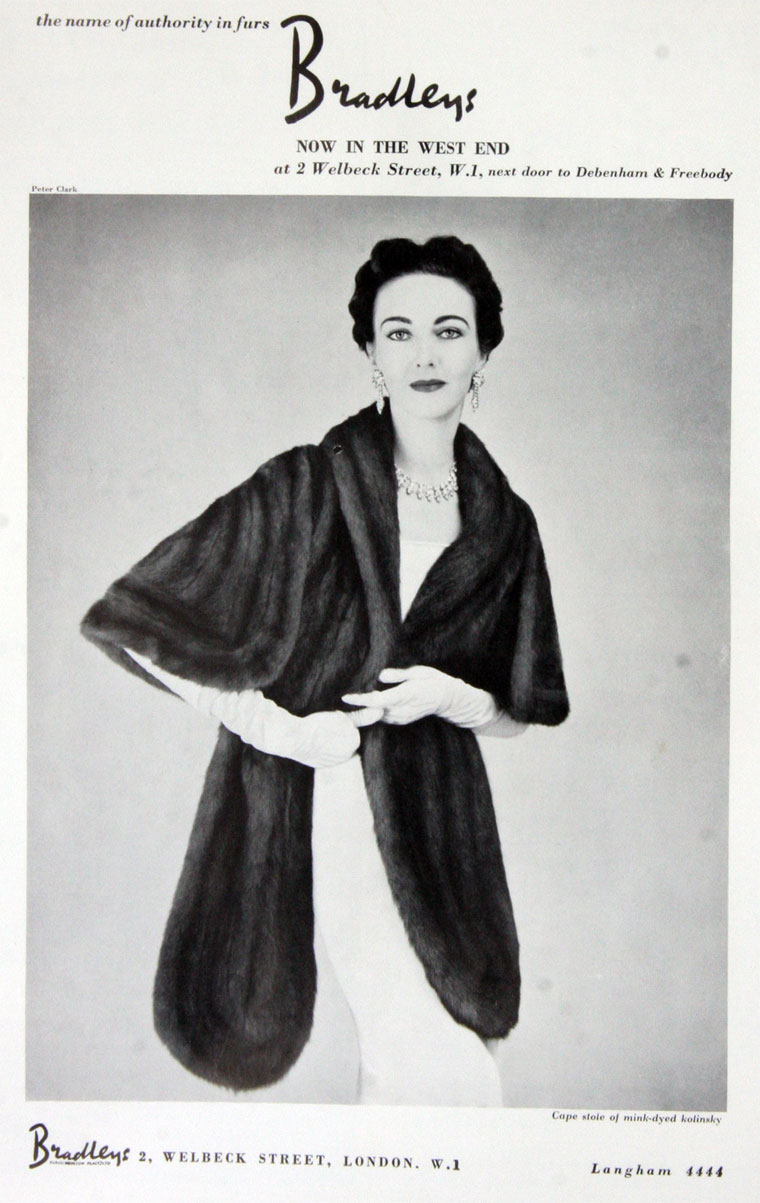 1920s Designed the “guinea gown” for the discerning debutante on a budget.

Based at 1 Chepstow Place , the property at this address was a cold store for furs way back to the 1860s. It was run by Samuel Bradley, Seniorr as that until about 1896 when his sons (there were quite a few siblings) Samuel (Jnr) Bernard, and Edward became involved in the business at which time it became Bradley and Sons Arctic Fur Store.

Samuel senior relinquished control of Bradleys in about 1906 (he was elderly then) and in 1912 it was relaunched with as Bradleys (Chepstow Place) Ltd. (Even the Financial Times carried a whole page editorial on this, because at this time Bradleys was the biggest fur specialists in Europe. Bradleys also started to produce a wide range of textile items at this stage including items especially designed for the motorist such as driving coats, driving hats with goggles, capes etc. At the outbreak of WW1 Bradleys were also assigned to produce uniforms for the troops. Samuel Bradley who had already fought with distinction in the Boer War enlisted at the outbreak of WW1 and was in France with the 16th Battalion London Regiment (Queens Westminster Rifles) by late 1914. He was already a holder of the DCM from the Boar War and added a DSO and MC to his tally. Bernard Bradley, the younger of the brothers had enlisted in the Royal London Mounted Rifles.

By the 1920s Bradleys had its own in-house fashion designers and tailoring departments and the workforce numbered around 600. A huge and luxurious range of fur items being offered to the well-heeled with prices going as high as 2,000 guineas for some coats. Wedding Gowns and other gowns were also being made in house and the company commissioned six Chrysler Motor Cars to have bodies built at Cricklewood for the sole benefit of being able to provide clients with a bespoke taxi service free of charge.

By the 1930s Bradleys clients read like a list of Who's Who and clients included Mr & Mrs Winston Churchill, Hollywood film stars and members of the Royal Family. Bradleys also underwent a major refit in the 1930s and the entire insides of 1 Chepstow Place was remodelled into the Art Deco style with no expense spared.

Samuel (Jnr) died in the 1930's and the outbreak of WW2 saw Bernard Bradleys two sons, Victor and Eric enlist into the RAF. By the time hostilities ceased and Victor and Eric returned from war service in 1945 much had changed at Bradleys. The blitz on London and the Doodle Bug and V2 rocket attacks had also caused casualties not just amongst the Bradleys personnel but also the buildings as well. The Hat Making facility being completely destroyed.

Following WW2 even the wealthy were more cautious with their spending, especially on luxuries such as fur items and expensive gowns. The business started to downturn by the early 1950's and Bernard Bradley passed away.

From the early days of Bradleys as a fashion house, it was taken as standard practice that not just the well heeled, but also professional people would at the end of each season - Spring, Summer, Autumn, Winter - take their entire wardrobe to Bradleys to have any repairs / alterations / adjustments made ready for the items to be worn for when the client wanted them back. Part of this process involved the garments being Spirit Cleaned / French Cleaned which was the name that Dry Cleaning was known by from the 1950's. The garments would be cleaned in big vats of highly flammable liquids such as Benzene / Petroleum.

The premises at Chepstow Place was sold after Bernard's passing and his son Eric decided that the way forward for Bradleys as a business was to continue offering a service whereby people could bring in their items to be repaired / altered and cleaned as required as Bradleys had previously undertaken. However advances in Dry Cleaning technology meant that the dry cleaning process could now be carried out safely using non-flammable solvents in compact self contained machines (the dry cleaning machine - dry cleaning has never been dry but it is called dry cleaning because no water is used in the process).

Eric was one of the first people to open up one of the new High Street Dry Cleaners, and shop number one was in North London. From that day, Bradleys took up the mantle of Dry Cleaning and has remained as specialist dry cleaners ever since.

As of 2012, Bradleys has celebrated its 101st birthday as specialists in textiles and cleaning and has two branches, one in Milton Keynes and one in Ampthill.

"We had a very fashionable outlet shop from the 1920s until the Second World War in Rue De l’Opera in Paris. A store which sold the Guinea Gowns (for the fashionista on a budget) in Western Road Brighton from the 1920s until after WW2 and also C&A apparently used to stock our range of hats."