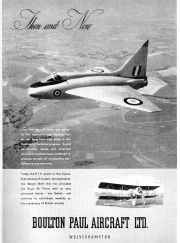 Note: This is a sub-section of Boulton Paul Aircraft.

The Boulton Paul P.111 (also called Boulton Paul BP.111) was a British experimental aircraft of the 1950s designed to explore the characteristics of tailless deltas.

The P.111 made its first flight on 10 October 1950, at Royal Aircraft Establishment Boscombe Down with Squadron Leader Bob Smyth at the controls. Later test flying was carried out by the legendary test pilot, Alexander E. "Ben" Gunn, who described the aeroplane as "touchy" and "like flying a razor's edge".

The P.111A first flew on 2 July 1953 from Boscombe Down. Shortly afterwards the anti-spin parachute mounted on the rear port fuselage was strengthened so it could be deployed as a braking parachute and the pilot was given control over the strength of the power controls. It was used by the RAE in a series of explorations of delta wing characteristics and later based at RAE Bedford. During this time it flew with each of the three wing tips.

After a last flight in 1958 it went to the Cranfield College of Aeronautics as a training airframe. In 1975 it was acquired by the Midland Aircraft Preservation Society on long-term loan for its Midland Air Museum at Coventry Airport, making the journey by road on Sunday July 13, since when it has been on static public display.

The P.111 was followed by another delta-winged experimental aircraft, the P.120 which was intended to compare and contrast the behaviour of an otherwise identical tailed delta.