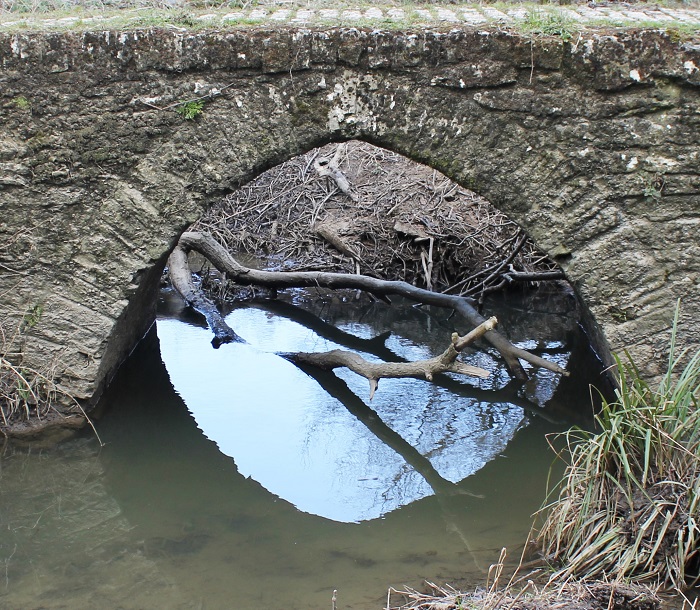 A mediaeval packhorse bridge over the River Alham near Hornblotton, Somerset.

Accessible only on foot through fields, by a footpath now known as Monarch's Way.

It might be expected that such an ancient and well-made packhorse bridge would be approached by a well-used made track or holloway, but this is not the case.

1924 'REPLIES TO QUERIES. 710. —Pack-horse Bridges.—A bridge of this kind, which is probably known to but few people, lies two or three miles west of Castle Cary Station, down a (frequently very dirty) lane between Sutton and Hornblotton. It is known as Bolter’s Bridge, and is said have been constructed by the monks of Glastonbury, in connection with a pack horse road between their two properties Glastonbury and Bruton. Father Horne probably knows the narrow pack horse bridge near the church in the latter town, consisting of a single arch and a very picturesque design, which is commonly known as "Bruton Bow."'[1]

1928 'BOLTER’S BRIDGE
The Surveyor reported that the work of repair to the remaining arch of Bolter’s Bridge, Hornblotton, and the removal of the soil had been completed.
The Clerk read a letter from H.M. Office of Works stating that the ancient monuments Board had reported to the commissioners that it was understood that the Shepton Mallet Rural District Council were the owners of the Bridge, and that it was a monument of national importance and the Commissioners would accordingly include it in their list of ancient monuments.
The Chairman said this meant they would have no right to demolish the bridge without the consent of the commissioners.
Major Garton thought they had done a very good thing in repairing the bridge, and nothing would be needed to be done there for many years.
As the result of investigation it appears that the bridge must be over 150 years old, and no trace could be found of the Rural District Council having ever repaired it. Further it was not a County bridge.'[2]