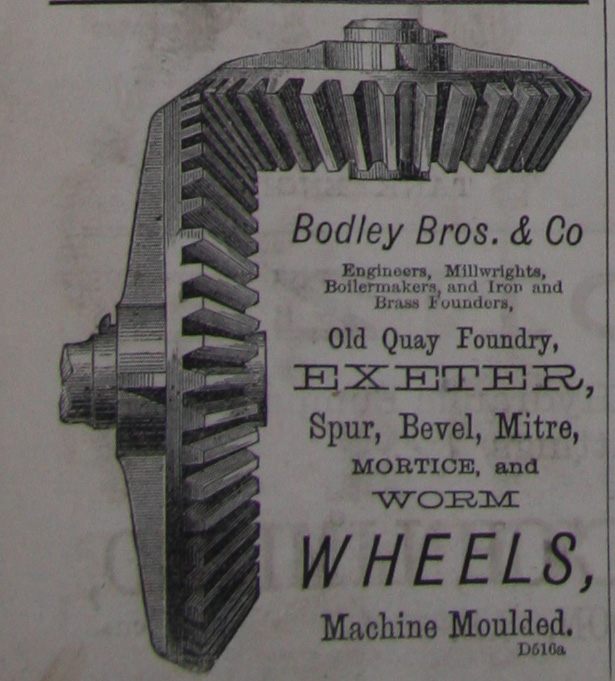 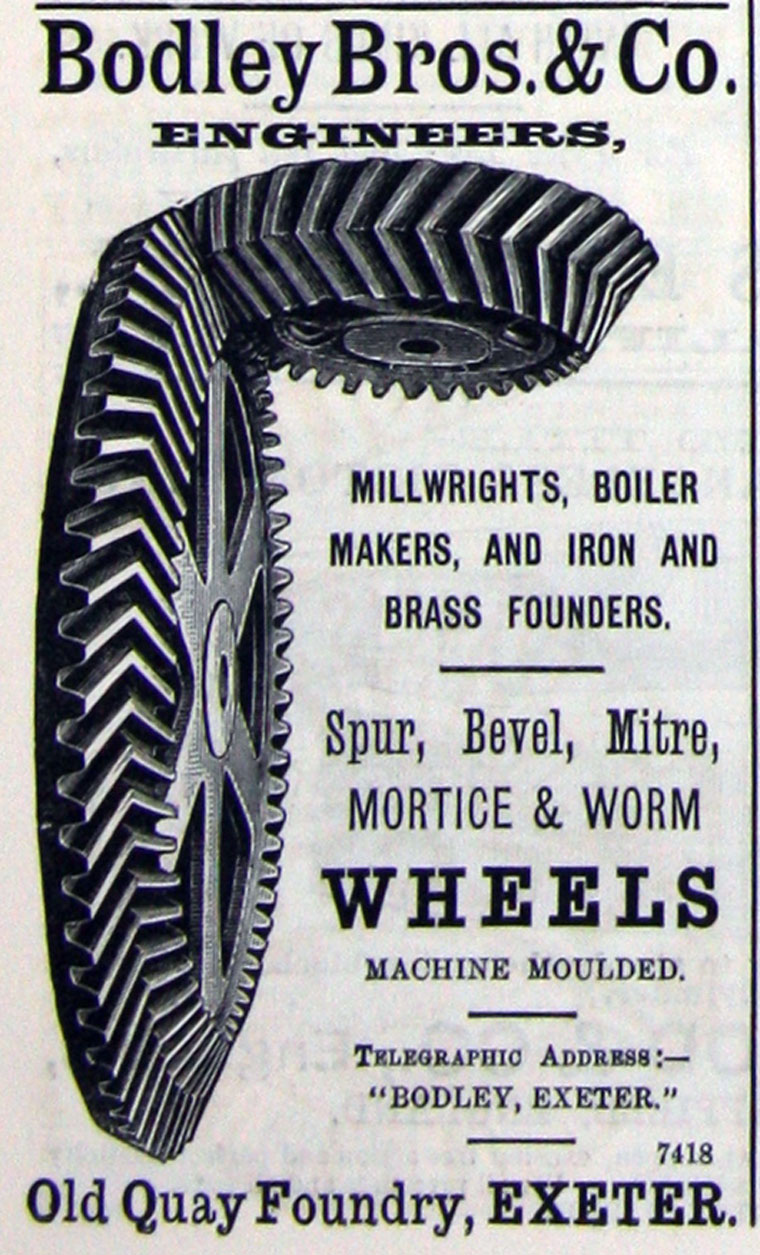 Members of the Bodley family ran iron foundry and engineering businesses in Exeter over a period of 177 years. An excellent account is available online. [2]

1875 Partnership dissolved. '...the Partnership heretofore subsisting between us the undersigned, William Canute Bodley and Owen Arthur Bodley, in the business of Ironfounders, Brassfounders, Engineers, Millwrights, and Boiler Makers, and carried on at Old Quay Foundry, Commercial-road, in the county of the city of Exeter, under the style or firm of Bodley Brothers, has this day been dissolved by mutual consent; and that in future the said business will be carried on by the said Owen Arthur Bodley, on his separate account...'[4]

1878 Cast the 10 foot diameter breastshot waterwheel and associated gearing for Tracey Mill Trout Farm. The waterwheel was cast by Bodley Brothers for local ironfounder and millwright Walter Mickelburgh but the wooden upright shaft may date from the 18th century. Also known as Griggs Mill in 1889 when it was a flour or grist mill.

1880 'Early on Saturday morning large iron wheel which was standing in the yard of Messrs. Bodley Brothers, engineers, in the Commercial-road, was struck by the lightning and shivered into several pieces.'[6]

1884 Bodley Brothers, and Co, Exeter, ENGINEERS AND IRON AND BRASSFOUNDERS. Estimates given for all kinds of Machinery. Gear Wheels Moulded by Patent Machinery to any diameter without Patterns. STEAM ENGINES, BOILERS, WATERWHEELS. Builders and General Ironwork.[7]

1897 'EXETER INDUSTRIES. A VISIT TO THE OLD QUAY FOUNDRY.
To the casual eye Exeter presents but few indications of commercial or manufacturing activity, but the penetrating investigator will find the elements of a large amount of trade if he directs his steps in the right direction. He will also discover that much of the material produced and the work done enjoy an almost unique reputation in parts far removed from the West of England. Indeed, it may be said that the bulk of the manufacturing and manipulating business of the city is the result of orders which come from afar.
These remarks are particularly appropriate to Messrs. Bodley Bros. and Co's Old Quay Foundry opposite the Barytes Works in Commercial-road. A big pair of doors, a dead wall, and a wicket gate form all that is to be seen from the street, but behind these lies a busy hive of industry turning out goods that go to all parts of the world. With Mr. Owen Bodley as our Cicerone we make a tour of the premises and fairly extensive we find them. The speciality of the firm is gear wheels, or cog wheels as ordinary people term them, and for their production the works contain a number of ingenious machines and appliances, some of them of special design.
The moulding department is full of interest. The moulding material is a, mixture of black sand and other ingredients, the incorporation and proportioning of which are entrusted to a man who has developed a special talent for the work. In the old days a wooden pattern had to be made to give the necessary form to the casting sand which was pressed round it. If any variation in the number of cogs was required an entirely new or an extensive reconstruction of the old pattern was necessary - a process costly in money and time. Here, however, we see a machine capable of forming a mould of any size and with any number of teeth, odd or even. Primarily, it consists of a central pillar from which is pivoted a radial arm, carrying on its outer end a leg, to the bottom of which is attached a segment of a circle bearing four or five teeth. The machine might, indeed, be compared to a person's leg with the knee joint at right angles, the interstices of the toes forming the spaces for the cogs. The segment is fixed rigidly and the casting sand pressed firmly against it; when one section is finished the arm is swung round four or five inches, and the operation repeated, till the whole circle is completed. A cover is then placed on the top, the metal poured in, and a perfect wheel is the result, requiring but little subsequent trimming.
Messrs. Bodley have devoted so much study to this branch of the engineering industry that their work, as we have said, is sent to all parts of the world; as a matter of fact their local business is very small. Every kind of wheel is in course of manufacture. At one bench is an employee busily engaged in a phosphor bronze wheel to cut its teeth properly. Phosphor bronze is a very hard metal having the appearance of brass or gunmetal, and will stand the roughest wear. There are also as number of wheels with teeth intended to engage with a worm, these being principally used for lifts. There are wheels with helical teeth, some of these going to Spain, and other orders are for South Africa, India, and other distant places.
Some firms do their own casting and send the wheels to the Old Quay to be bored and otherwise finished. Some idea of the work which the firm are called upon to perform may be gained from the fact that they have a turning lathe which weighs fifty tons. At the present time there are a couple of gear of wheels of four tons each in the foundry waiting to be bored in one of the lathes ; some time ago there was a pair weighing six tons each - a healthy pair of twins.
To reduce the noise, some wheels are fitted with wooden cogs and for this purpose Messrs. Bodley have a special machine which cuts teeth of any required size with the greatest accuracy. In another part of the foundry is a lathe at which a man is engaged in cutting a screw thread on a great steel shaft which has been sent down from London.
We note how admirably arranged are the works for securing the minimum of handling. Various kinds of hoisting gear rapidly lift the heavy castings from one department to another until they are finally landed in the yard, whence they are despatched to their destination. Everything is orderly, and there is much less clangour than in the majority of foundries, this being due to the firm's peculiar class of business. With an inspection of the furnaces in which the iron is melted and a glance at the great store of apple wood from which the patterns are largely made, and for assisting the seasoning, of which Mr Bodley has adopted a novel plan, we complete our tour.
And the moral of it all: That behind an unpretentious and unimpressive exterior Exeter has in the Old Quay Foundry a manufacturing concern which has gained a wide reputation for the excellence and reliability in its turn-out. As a prophet is not without honour except in his own country, so the miracles worked by Messrs Bodley Bros. find their greatest appreciation far beyond the confines of the county, and give the city a credit among hundreds of people to whom it is but a name.' [8]

Hornsbury Mill, near Chard, Somerset. ST332108. 18ft by 6ft overshot, internal. There is a record of an 18ft waterwheel cast for Joseph Hawker of Chard in Bodley’s journals for November 1876 - this is not the wheel, it seems, which was installed in 1870. The 1876 waterwheel cost £125 to manufacture and was installed in about 6 days at a cost of £16.

The following assumed to be by Bodley Bros:

Sidbury Mill, Sidbury. SY13799128. Waterwheel brought from Dunscombe Farm near Crediton. This waterwheel was cast at Exeter in 1879, listed as 14ft dia. It cost a little under £30 and was installed at Dunscombe in about 7 days at under £7.