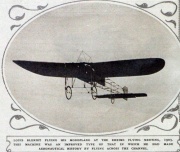 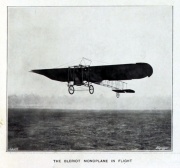 The Bleriot VIII was flown successfully in 1908.

By 1909, he had created the Blériot XI, which was more stable. Its first flight was in 23 January of that year, and later it was displayed at the Exposition de la Locomotion Aerienne in Paris in 1909. It was used by Louis Bleriot to make the first flight across the English Channel in a heavier-than-air aircraft, on 25 July 1909.

The Bleriot XI, largely designed by Raymond Saulnier, was a development of the Bleriot VIII. Like its predecessor, it was a tractor-configuration monoplane with a partially covered box-girder fuselage built from ash with wire cross bracing. The principal difference was the use of wing warping for lateral control.

After the successful crossing of the English Channel, there was a great demand for Bleriot XIs. By the end of September 1909, orders had been received for 103 aircraft.

The Type XI remained in production until the outbreak of the First World War, and a number of variations were produced. Various types of engine were fitted, including the 120° Y-configuration, "full radial" three-cylinder Anzani (the restored example at Old Rhinebeck Aerodrome still flies with this) and the 50 hp and 70 hp, seven cylinder Gnome rotary engines. Both single and two-seat versions were built, and there were variations in wingspan and fuselage length. In later aircraft the tip elevators were replaced by a more conventional trailing edge elevator, the tail wheel was replaced by a skid, and the former "house-roof" five-member dorsal cabane being replaced by a simpler, four-sided pyramidally framed unit similar to the ventral arrangement for the later rotary-powered versions. Bleriot marketed the aircraft in four categories: trainers, sport or touring models, military aircraft, and racing or exhibition aircraft.

The Type XI took part in many competitions and races. In August 1910 Leblanc won the 805 km (500 mi) Circuit de l'Est race, and another Bleriot flown by Emile Aubrun was the only other aircraft to finish the course.[

In October 1910, Claude Grahame-White won the second competition for the Gordon Bennett Trophy flying a Type XI fitted with a 100 hp Gnome engine, beating a similar aircraft flown by Leblanc, which force-landed on the last lap. During the race Leblanc had established a new world speed record.

In 1911, Andre Beaumont won the Circuit of Europe in a Type XI and another, flown by Roland Garros, came second.

1912 April. Denys Corbett-Wilson, the Anglo-Irish aviator who made the first successful flight from Britain to Ireland.