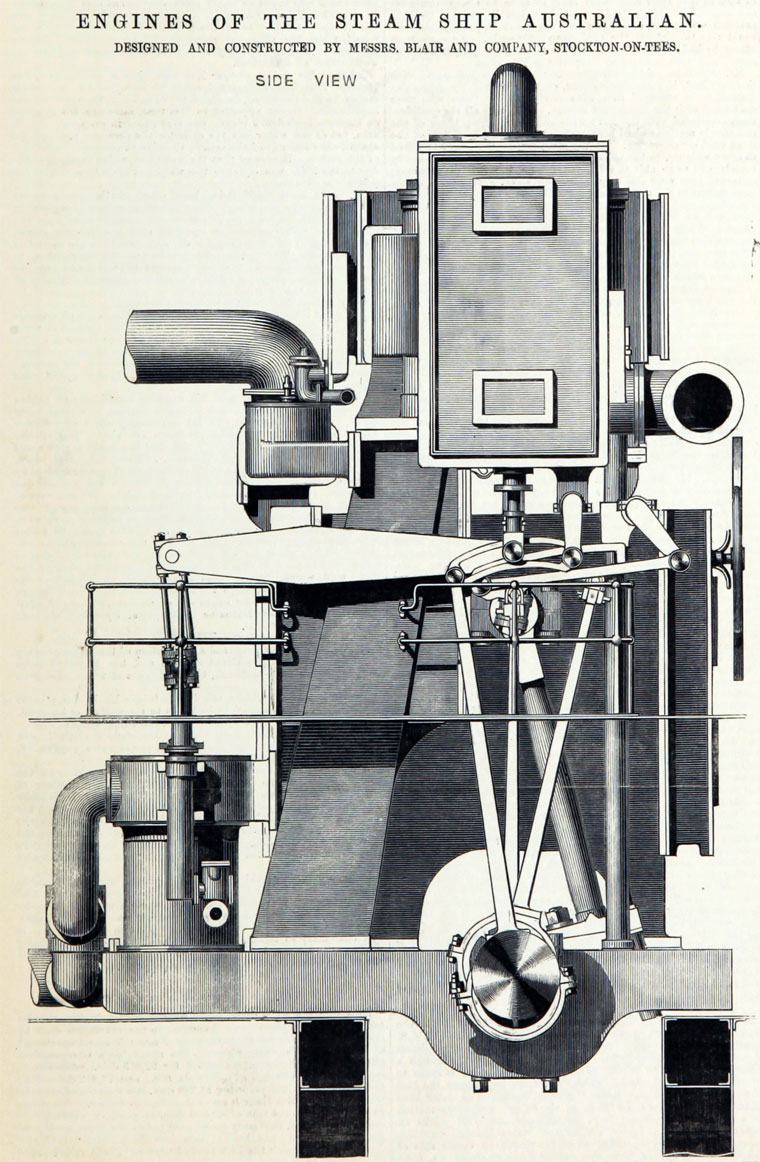 1855 George Blair was appointed manager of engine maker Fossick and Hackworth, which had started to shift from locomotive building to marine engineering.

1864/5 in the spring Blair was made a partner and the company became Fossick, Blair and Co when Hackworth retired.

Around 1866 the company became Blair and Co. George Blair was responsible for the expansion of the works to specialise in marine engines. At this time the company had 700 employees (later to rise to 2,000) and covered an area of seven and a half acres.

1869 The first compound marine engine on the Tees was built by Blair's in January and fitted to the "Glenmore" built by Backhouse and Dixon.

1884 the company produced its first triple expansion engine for the "Burgos" built by Richardson, Duck and Co.

1887 the sheerlegs, which were to become a Stockton landmark for many years were errected at a cost of £2,695. These shearlegs were capable of lifting up to 100 tons and were sited near the river to lift marine engines into newly built ships.

1900 The company was registered on 28 June, in reconstruction of a company of the same title, to take over a business of marine engineers. [2]

1901 Triple expansion engines of c.1400 IHP for the SS Westonby, built by Ropner and Son, Stockton-on-Tees.[3]

By 1914 almost 1,400 marine engines had been built. At least 340 for Pearse and later Ropner, 240 for Richardson, Duck and Co and 103 for Thomas Turnbull at Whitby. A total of 75 engines were built during the First World War.

1919 The company was taken over by Gould Steamships and Industrials [5].

1920 The controlling interest was obtained by Mr J. C. Gould and the firm became one of an association of shipping and shipbuilding interests (known as Gould Steamships and Industrials). Unfortunately, the change synchronised with the commencement of the serious and extended trade depression which lasted five years or more.[6]

1925 March: The company announced that unless extraordinary changes come over the local industrial situation it would be compelled to close down its works in six to eight weeks time.[7]

1926 Mr R. S. Dalgliesh took over the marine engineering works of Blair and Co to try and secure the business.