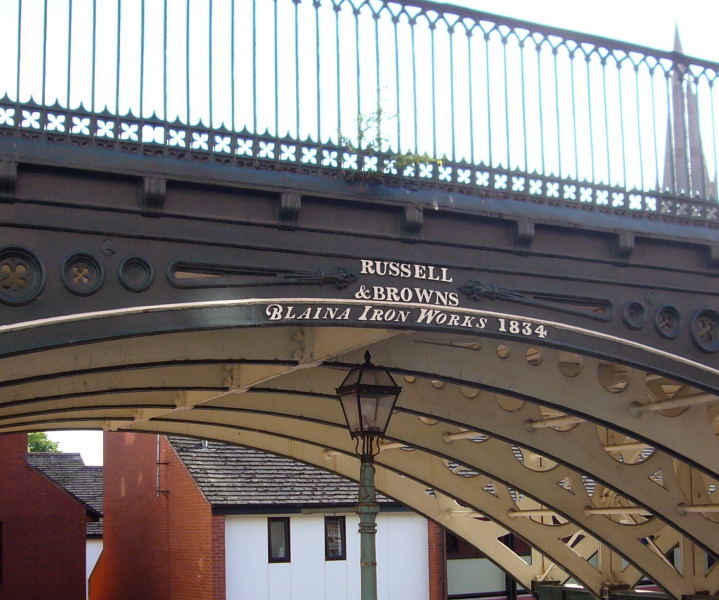 The Blaina Iron Works, situated on the east bank of the Ebwy Fach river.

1824 the works was completed and two furnaces put into blast.

1829 Mention of Richard Brown of Blaina Iron Works, at the marriage of his daughter Ann to William Roden. Ann died 1836.

1830 Reportedly built a locomotive to be used in own works. The engineer was John Brown. [1]

In the early 1830s the brothers Richard and William pulled out of active management of the Blaina Works (known as R. Brown and Son), leaving Richard's son Thomas Brown as manager in partnership with John Russell (1796-1873).[2]

1834 Cast the ironwork for the Iron Bridge, North Street, Exeter, Devon. Designed by Russell and Browns. Shipped from Newport to Exeter canal basin. This relieved traffic congestion caused by laden carts having to ascend the steep North Street in and out of the city centre.

1839 the works merged with nearby Cwm Celyn Iron Works with its four furnaces to form a new concern, The Cwm Celyn and Blaina Iron Company, which then operated both works together.

1844 the company was bought by a new partnership; Frederick Levick was brought in as manager.

It soon changed hands again and the new partnership (presumably Levick and Simpson) displayed works products at the Great Exhibition of 1851.

By 1855 the company was also operating three furnaces at Coalbrookvale.

1858 Frederick Levick became the sole owner of the three works when each site had two furnaces capable of operation.

Greater efficiencies followed and by 1859 each furnace was producing 270 tons per week.

1867 the three ironworks were unsuccessfully put up for sale

1869 Despite the company having been reported as closed in 1867, 'Engineering' magazine of 16th July 1869 included a feature about 'coal-getting equipment' designed by James Grafton Jones of Blaina Ironworks.

1869 attempt were made to revive the Blaina Ironworks when a new company, the Blaina Iron and Coal Co., operated two furnaces and four puddling furnaces.

1871 Became part of the Nantyglo and Blaina Ironworks Co

1874 Blaina ironworks remained in production as it used small coal unsuitable for the market.

All visible traces of the ironworks at Cwm Celyn and Blaina have since been eradicated by twentieth-century developments.