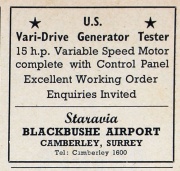 1941 plans were drawn up to build an RAF aerodrome in the area known as Hartfordbridge Flats, between Camberley and Hartley Wintney with 3 all-weather runways, but bissected by the main A30 road.

1942 The airfield opened for air force use.

1943 The A30 was closed through the airfield

By 1944, over 3,000 airmen were based at the field. An example of the FIDO (Fog Investigation and Dispersal Operation) was installed to counteract fog.

1945 September: the first civilian air service began from Blackbushe. The operator was Danish Airlines, and they flew passenger-carrying Fortresses and Focke-Wulf Condors to Copenhagen and Stockholm.

1946 The Transport Command squadrons moved out of Blackbushe and the A30 was re-opened.

During the next few years, Britavia, Westminster Airways, Airwork and Silver City Airways used the airfield.

1955 the United States Navy used the airfield as communications headquarters.

The airfield was used for crew training by many airlines, and as a diversion destination when fog affected Heathrow.

1960 Blackbushe Airport was closed and fixtures and fittings were auctioned off. Parts of the runway were dug up.

Slowly some flying returned to Blackbushe. Then the field was acquired by British Car Auctions who upgraded the airport and invested in resurfacing half of the runway, installing a new lighting system with precision approach path indicators and other facilities.