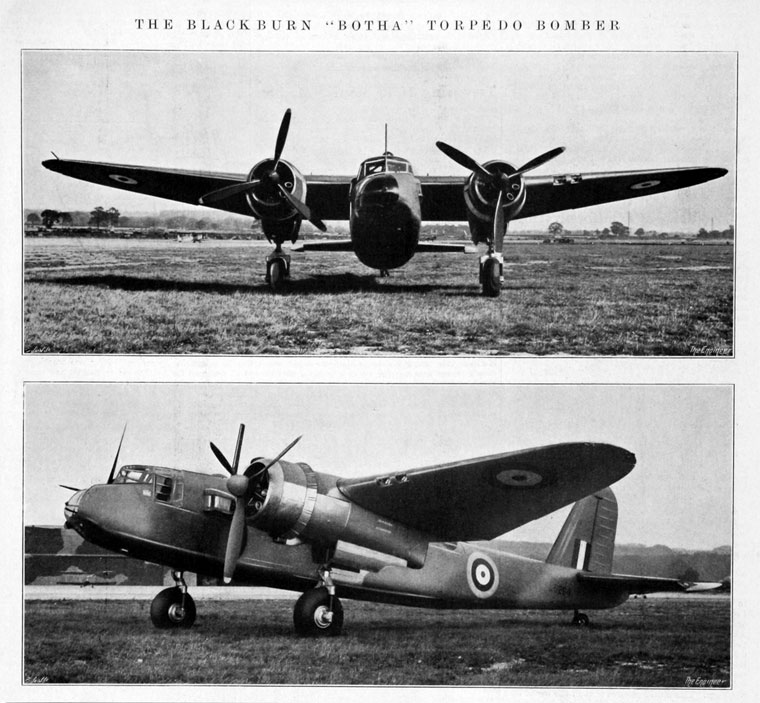 Note: This is a sub-section of Blackburn Aeroplane and Motor Co

The Blackburn B.26 Botha was a British four-seat reconnaissance and torpedo bomber. It was built by Blackburn Aircraft at their factory at Dumbarton, Scotland, as a competitor to the Bristol Beaufort, and entered service with the RAF in 1939. It was underpowered and was quickly withdrawn from operations.

In September 1935, the British Air Ministry issued specification M.15/35, for a three-seat twin-engined reconnaissance/torpedo bomber. Two submissions that met this requirement were accepted, from Blackburn for the Botha and the Type 152 (later known as the Beaufort) from Bristol. Both were intended to use the 850 hp (634 kW) Bristol Perseus engine. The Air Ministry later revised the Specification to M.10/36, which required a crew of four. The weight increase meant that both designs required more power. The 1,130 hp (840 kW) Taurus was provided for the Beaufort, but the Botha received only the Perseus X of 880 hp (660 kW).

The Air Ministry ordered 442 Bothas in 1936, while also placing orders for the Beaufort. The first flight took place on 28 December 1938.

The aircraft was built both at Blackburn's factory at Brough but also at a new factory at Dumbarton, Scotland. Brough built 382 aircraft and Dumbarton 200, a total of 580