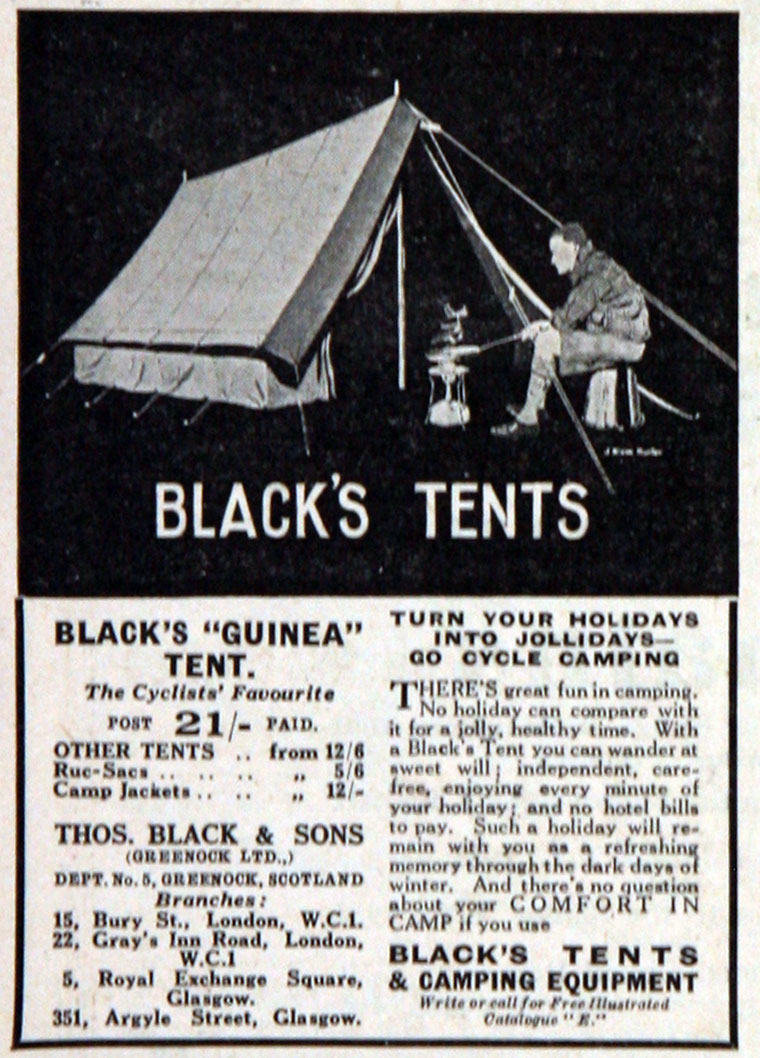 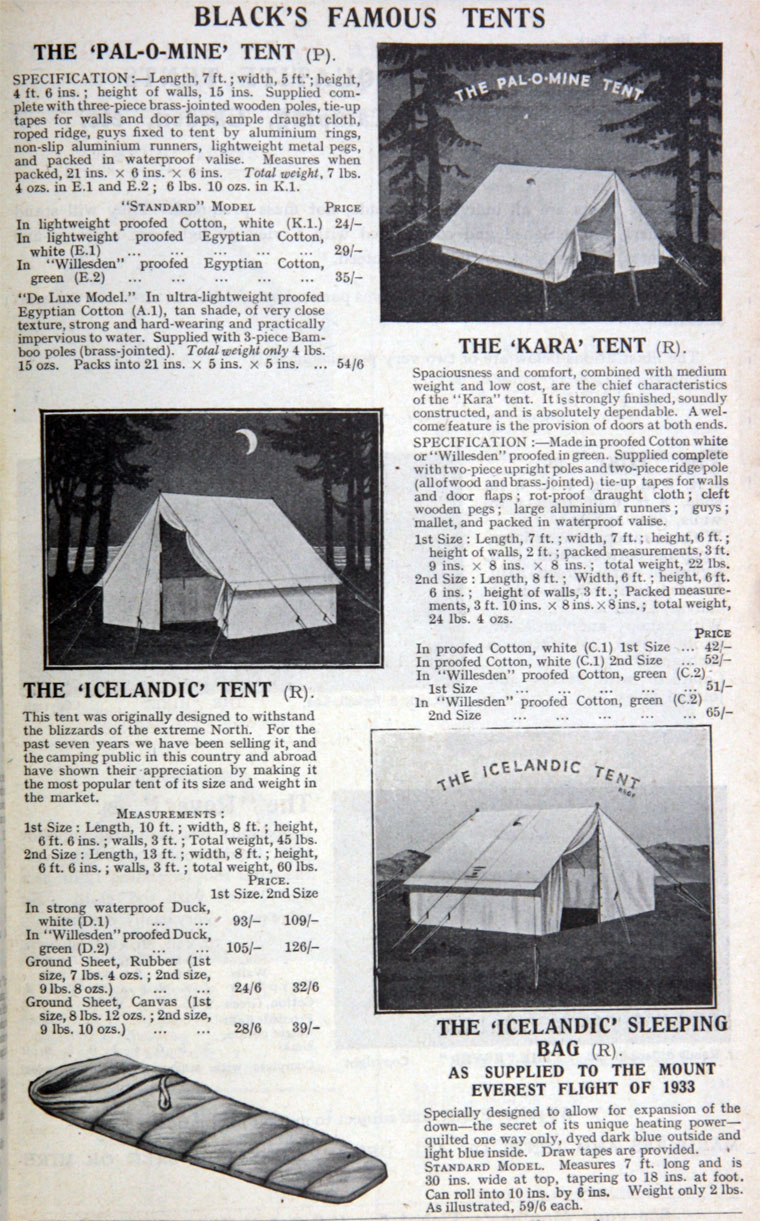 1853 While in Port Phillip, Australia, he left his ship for the goldfields and spent two years gold-digging in the Ballarat District of southern Australia.

1856 Sailed home as a fare-paying passenger. Later, went to Spanish Guinea in West Africa as an agent for the London firm of Laughland & Brown, trading Calico and other goods for ivory. Returned to Glasgow after about eighteen months for a holiday. A second trip to the same place in West Africa was not satisfactory. He suffered badly from dysentry and eventually returned home, where he made a full recovery.

1861 Married and became employed as a sailmaker in Glasgow.

1863 After about two years learning the trade, he started his own sail-making business in Greenock, which prospered from the start.

Thomas Black had a son, also named Thomas, who started his working life with his father, but seeing no future in the sail-making business, due to the decline in sailing ships brought about by the rise in steam engines, left with his wife and young family to join relatives ranching in California.

1904 Thomas Black Senior was now an old man and ill, so his son Thomas Junior was called home to wind up the failing business. Whilst journeying across America on his way home, he stopped off in Kansas City and saw a thriving canvas products business making tents, marquees and other large canvas goods. This set him thinking, and on returning home, decided not to close his father’s business, but instead, to change the the product range, to bell tents, marquees and garden tents for fetes and functions.

1905 Thomas Black Senior, the founder of the business, died. Thomas Junior became head of the firm, with his son, Daniel Crawford Black assisting. Hiring out equipment was begun with one-time sail-makers having to erect tents and marquees.

1921 Black’s Travel Agency started at 18 Nicholson Street, Greenock, to meet the demand for emigrant passages to North America and Australasia.

1930 An order was received from the Icelandic Government for 4,700 tents, as well as marquees, beds and bedding for the 14,000 visitors expected at the Millennial Celebrations of the opening of their Parliament. The tents supplied later became known as the ‘Icelandic’ tent.

1930 May. Thomas Black, Junior, died and his son, Crawford Black took over as head of the business.

Blacks did much to encourage lightweight camping, and in 1931 produced the first ‘Good Companions’ catalogue.

Soon larger premises and offices were required in London, and a move was made to 22, Gray’s Inn Road in the early thirties. William Nixon, a director of the firm in London, first started his career in the Bury Street premises. Around this time, the ‘Good Companions’ trade mark was registered.

1933 Lightweight camping gear supplied to Jock Scott, an ex soldier who walked from Greenock to Cape Town. With another set of equipment by Blacks, Jock Scott then walked across North America from San Francisco to New York. These two trips were an important showcase for Black’s tents and equipment.

1930s Throughout this period and up to the outbreak of the Second world War, Blacks exhibited at all the various Outdoor and Camping exhibitions held in London.

1939-45 Blacks made tents and other canvas goods, as well as down sleeping bags for the armed forces. Blacks also made and supplied hazel rod fenders for the Navy.

1941 May 7th. Greenock premises completely destroyed in the blitz of Greenock. Temporary premises found. After the war, a new factory was leased on an industrial estate at Port Glasgow. In 1948, it was opened by the Rt. Hon. Hector Mcneil, Secretary of State for Scotland.

1946 Acquired the rival business of Camp and Sports Co-operators (trading as Camtors). Directors of this new acquisition shown as D.C. Black and W.R. Henderson. This was to be the first of many acquisitions by Blacks.

1960s Exhibited a wide range of tents and equipment at a number of Camping and Outdoor Life Exhibitions held in the sixties.

1963 Centenary of the company. A special commemorative brochure published. Almost 400 people now employed, while turnover had increased by five times in the last ten years.

1965 D. C. Black, chairman of the group awarded an M.B.E. in the New Year’s Honours List in recognition of his efforts in the field of exports.

1965 March 31st. W. R. Henderson retired after almost 30 years’ service with the company. Mr Henderson was a member of the Camping Club for many years and it was through his interest in the Club and a chance remark being passed that led to the acquisition by Blacks in 1946 of Camp & Sports Co-operators.

1965 July. An additional 10,000 square feet manufacturing extension opened at port Glasgow to cater for the growing demand for tents and sleeping bags.

1966-67 An approach received from Silver & Edgington with a view to being taken over. On exchanging financial details however, it was seen that Blacks had the better trading position and profit record. It was mutually agreed that Blacks would effect a reverse takeover of Silver and Edgington Ltd., although in the Blacks’ 1968 catalogue, it states that it was a merger between the two companies.

Player Sports had an agreement with British Rail, which saw the provision of stocks of camping equipment established at the Channel Ports of Dover and Newhaven in conjunction with the Big Fleet Car Ferry Service.

1968 December. New range of frame tents for 1969 - The Safari Range. Frame tents now a major feature in the catalogue and an important part of overall sales.

1970? Acquired the firm of Millets Stores (1928) Ltd. The benefit here, was in the large number of retail outlets added to compliment the growing number of revamped Blacks’ Leisure shops being set up.

1972 Acquired, Andrew Mitchell & Co. Ltd., a Scottish based company manufacturing and supplying tarpaulins. This merger almost doubled the size of the group.

1976 October. Following many years of negotiation, acquired by mutual agreement the old established firm of John Edgington & Co. Ltd., of 108, Old Kent Road, London - tent makers and hirers, and suppliers of fine camping equipment par excellence since its inception in 1805. The latter half of the seventies however, saw Blacks in recession and in decline. All similar firms were in the same position.

1977-79 Acquired Vango (Scotland) Ltd., 47, Colvend Street, Glasgow, which became an associated company within the group. Their reputation was founded on quality products, of which the Force Ten range of tents were perhaps best known. They also made frame tents and sleeping bags.

1980 By this year, of the long established tents, only the Good Companions Standard, Major, and the Arctic Guinea, were available. There were, however, some new nylon tents, an Atlas range, and the long established Patrol tents. With decline due to recession obvious, it was all a far cry from the catalogue product list of twenty years ago.

1982 There were many problems affecting the camping and outdoor leisure industry in the seventies, some of them were ‘home grown’ through government legislation, while others were of an international nature. There was also the change in the public’s buying habits. These problems impacted on firms like the Black & Edgington Group, giving a few years of recession. This recessional period lasted for a period of five to six years and peaked around 1979-81. Pay policies imposed by the Government, which were intended to limit inflation, did almost the exact opposite. With demand greatly diminished, the result for the Black & Edgington Group was that the factories at Bristol, Sidcup and Greenock had to be closed. The head office factory at Port Glasgow and the Mitchell Unit in Glasgow were the only two which survived. It was in the middle of all these problems with closures that the Board had to contend with a predator situation with regard to a small amount of equity. A very small percentage holding was sold by one of the non-executive directors to a third party, who in turn sold it to a body interested in purchasing part of the group.

With continuing poor performance from the B&E Group, the predator increased his holding substantially. This became the situation as of June 1983, when it was made clear by the predator that a full bid could be made within a few days. The initial reaction was to reject any bid, but financial advisers made it clear, that in the light of the continuing poor performance and the time it might take to restore profits, a ‘defence’ was impractical, and it was in the best interests of shareholders to ‘surrender’.

1983 Between June 1983 and 2nd April 1984, the Group as it had been, ceased to exist. The purchaser had made it clear throughout negotiations that he only wanted the Travel Division, and was prepared to sell off what remained to the highest bidder. As it happened, each division was sold off to its own management, with the exception of Blacks Camping and Leisure Shops, which went to others outside the group.

Tent manufacturing became: Vango (Scotland) Ltd. Thereby reverting to the position it had before being amalgamated with Blacks some years earlier. The company retains the Black & Edgington business registration number. Apart from the Bungalow and the large patrol tents (Icelandic, Stormhaven and Nijer), no other Blacks tents were continued by the successor owners although, some of Blacks sleeping bags, particularly the Icelandic range, were.

The Hiring and Flag Divisions amalgamated to become Black & Edgington Ltd. under a management buy-out. With a London base at Stratford for a few years, the head office was at Needingworth Road, St. Ives, Cambridge. Although still retaining its name, it subsequently became part of the Sellers Leisure Group until around 2002, when it then gave up its name as the Sellers Group became part of the Arena Event Services Group.

The company is still trading and has a website.

Camping Club magazines, Exhibition Guides and Handbooks, advertisements, direct unpublished sources and a collection of over 90 tents. Compiled by TA (2014)