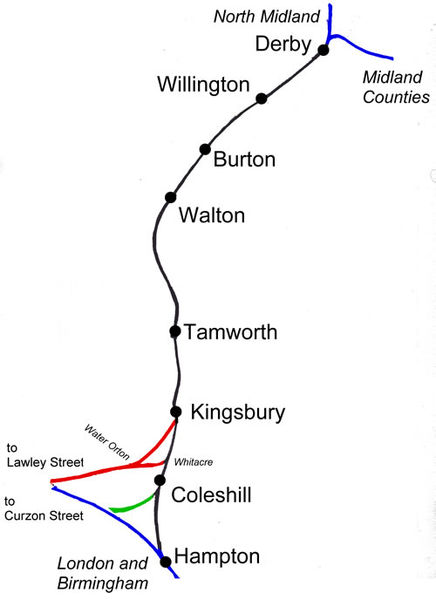 The route of the Birmingham and Derby Junction Railway.

Birmingham and Derby Junction Railway was a British railway company.

From Birmingham it connected at Derby with the North Midland Railway and the Midland Counties Railway at what became known as the Tri Junct Station. Although Birmingham was served by an extensive canal network, indeed, it is suggested they were a factor in its growth as an engineering centres, there were huge technical problems. As early as 1824, entrepreneurs had been looking at the possibilities of the railway and by the end of the 1830s the lines to London and to Liverpool and Manchester were proving a huge success. Accordingly, there was great interest in exploring other routes, including the northeast, with the idea of a line to Derby to meet the proposed North Midland Railway.

George Stephenson surveyed the route in 1835 and the Birmingham and Derby Junction Railway Bill passed through Parliament in 1836. It would run from Derby to Hampton-in-Arden, where it would join the London and Birmingham Railway line to its terminus at Curzon Street.

George's son Robert Stephenson took on the post of engineer, with an assistant, John Cass Birkinshaw. Some 42 miles long, it would need seventy eight bridges and two viaducts, with a cutting at the approach to Derby, consideration being given to the danger of flooding by the River Trent.

Henry Smith was appointed the Chairman of the company

1837 August. Announced the work on the line had commenced

It opened on 12 August 1839. From the start the joint use of Curzon Street terminus, with the London and Birmingham Railway, gave problems, so in 1840 a new line was built with a terminus at Lawley Street.

In 1840 the line ran from Derby to Birmingham with stations at Willington, Burton, Barton and Walton, Oakley and Alrewas, Tamworth, Kingsbury, Coleshill and Hampton. The journey time was two hours and a one-way fare ranged from 10s to 5s.

Strong competition between the line and the Midland Counties Railway for transport, particularly of coal, to London, almost drove both of them out of business.

In 1844, the Birmingham and Derby Junction Railway, the Midland Counties Railway and the North Midland Railway merged to form the new Midland Railway.

It is now part of the main line from the North West and Newcastle, via Derby and Birmingham New Street, to the south West at Bristol. It now operated by Virgin Cross Country.