1856. A notice inscribed on the clock reads : "This clock was made in the year of Our Lord 1854 by Frederick Dent of the Strand and of the Royal Exchange from the designs of Ed. Beckett Denison Esq." 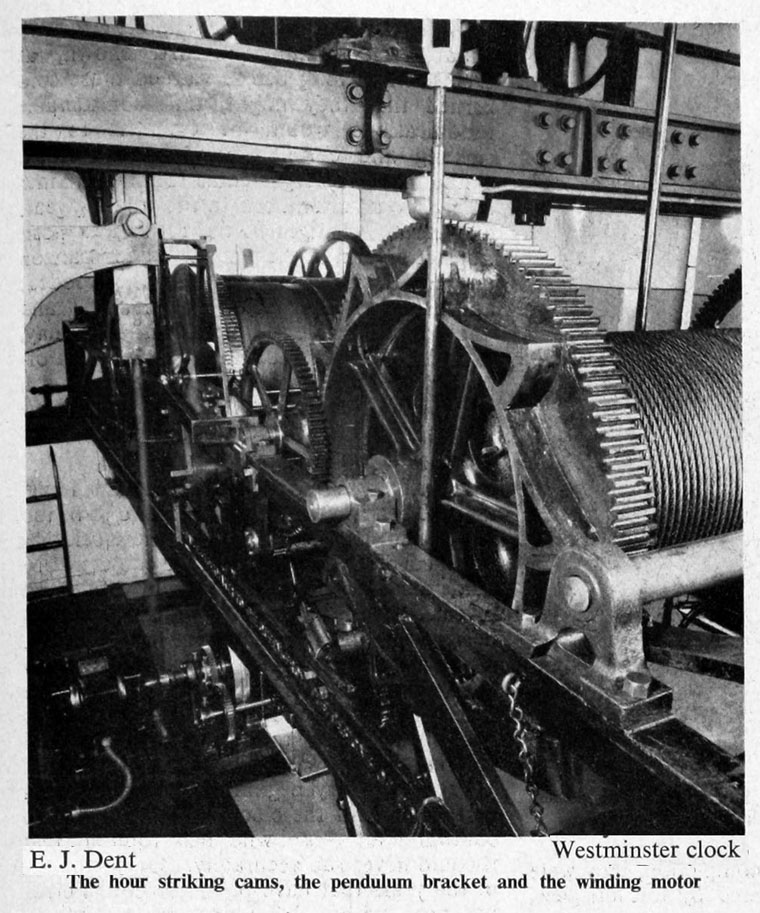 1959. Westminster Clock, the hour striking cams, the pendulum bracket and the winding motor. 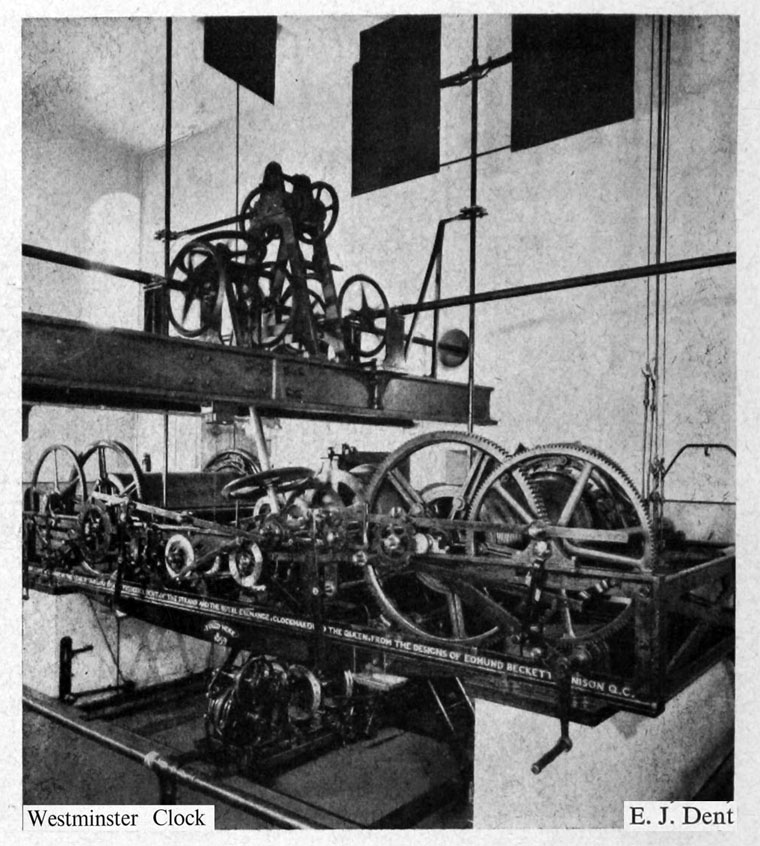 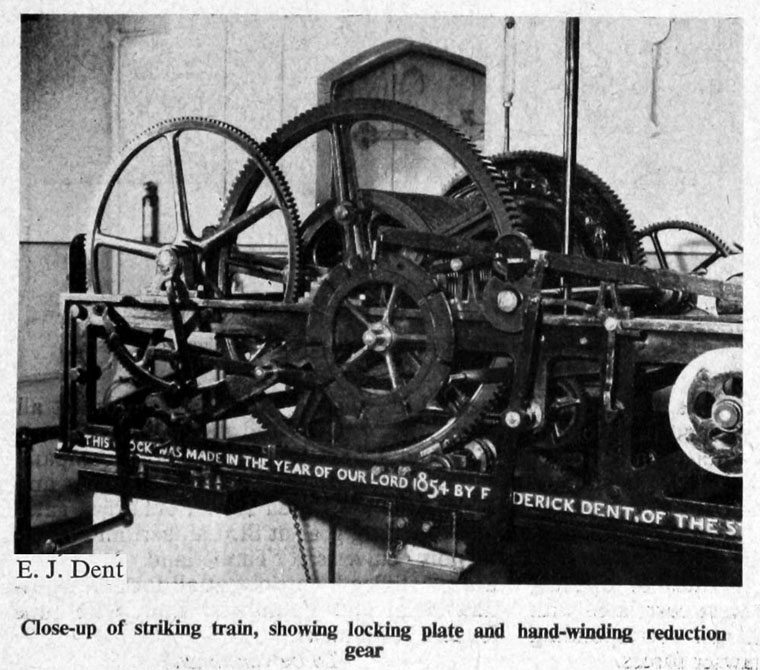 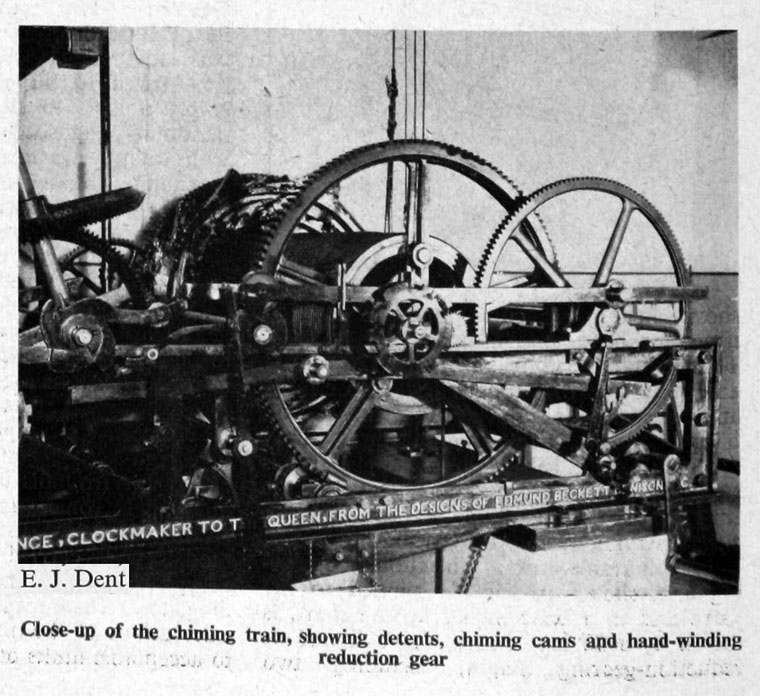 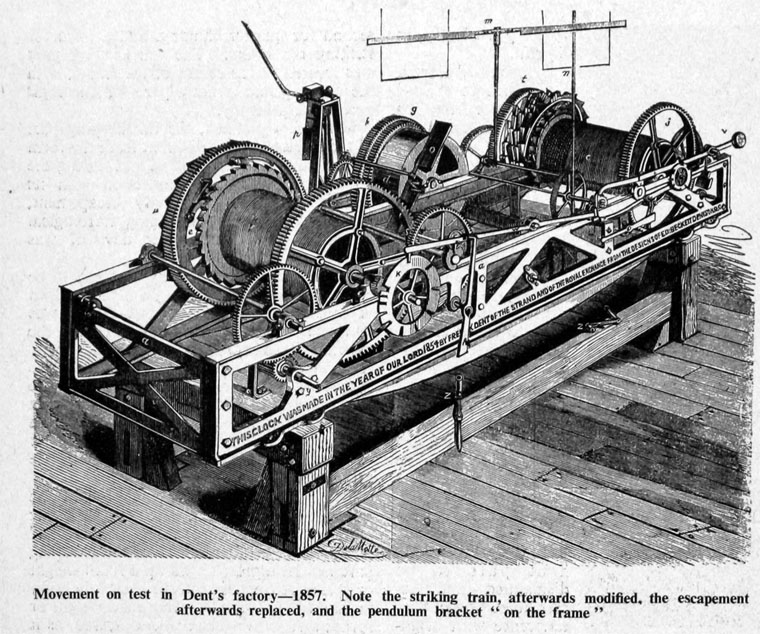 The name "Big Ben" is often used to describe the tower, the clock and/or the bell in the Elizabeth Tower at the Houses of Parliament but the name was first given to the Great Bell[2]. The name was given in recognition of Sir Benjamin Hall, the First Commissioner of Works, whose name was inscribed on the bell.

1858 The Clock tower was completed. The tower holds the second largest four-faced chiming clock in the world. The tower has since become one of the most prominent symbols of the United Kingdom and is often used in the establishing shots of films set in London.

2012 The "Clock Tower" was renamed as the Elizabeth tower to celebrate the Diamond Jubilee of Elizabeth II.

The clock's movement is famous for its reliability. The designers were the lawyer and amateur horologist Edmund Beckett Denison, and George Airy, the Astronomer Royal. Construction was entrusted to clockmaker Edward John Dent; after his death in 1853 his stepson Frederick Rippon Dent completed the work, in 1854.

As the tower was not complete until 1859, Denison had time to experiment: Instead of using the deadbeat escapement and remontoire as originally designed, Denison invented the double three-legged gravity escapement. This escapement provides the best separation between pendulum and clock mechanism. The pendulum is installed within an enclosed windproof box beneath the clockroom. It is 13 feet (4.0 m) long, weighs 660 pounds (300 kg), suspended on a strip of spring steel 1/64 inch in thickness, and beats every 2 seconds. The clockwork mechanism in a room below weighs 5 tons. On top of the pendulum is a small stack of old penny coins; these are to adjust the time of the clock. Adding a coin has the effect of minutely lifting the position of the pendulum's centre of mass, reducing the effective length of the pendulum rod and hence increasing the rate at which the pendulum swings. Adding or removing a penny will change the clock's speed by 0.4 seconds per day.[3]

1856 John Warner and Sons cast the Great Bell (the hour bell) at Norton near Stockton-on-Tees. It was transported by rail and sea to London. The quarters are struck upon four smaller bells.

The bell was hung in New Palace Yard. It was tested each day until 17 October 1857 when a 1.2m crack appeared. No-one would accept the blame. Theories included the composition of the bell's metal or its dimensions. Warners blamed Denison for insisting on increasing the hammer's weight from 355kg to 660kg. Warners asked too high a price to break up and recast the bell so George Mears at the Whitechapel Bell Foundry was appointed to cast the new bell.[4]

1858 After the cracking of the first Great Bell, it was recast by George Mears at the Whitechapel Bell Foundry using the reclaimed bell metal. The second bell was cast on 10 April 1858.

This bell was 2.5 tonnes lighter than the first. Its dimensions meant it was too large to fit up the Elizabeth Tower's shaft vertically so it was turned on its side and winched up. It took 30 hours to winch the bell to the belfry in October 1858. The four quarter bells, which chime on the quarter hour, were already in place.

1859 Big Ben rang out on 11 July but the success was short-lived. In September, the new bell also cracked and Big Ben was silent for four years until the problems were solved by turning the bell by a quarter turn, so the hammer struck a different spot, using a lighter hammer and preventing the crack from spreading by cutting a small square into the bell [5]

The hour bell weighs 13 tons 11 cwt. The quarter bells weigh from 4 tons to 1 ton each. The tune, or rather succession of notes, played by the quarter bells, consists of a series of ingenious variations of a passage which may be found in the opening symphony of the air "I know that my Redeemer liveth" in the Messiah.