Grace's Guide is the leading source of historical information on industry and manufacturing in Britain. This web publication contains 148,378 pages of information and 233,851 images on early companies, their products and the people who designed and built them. 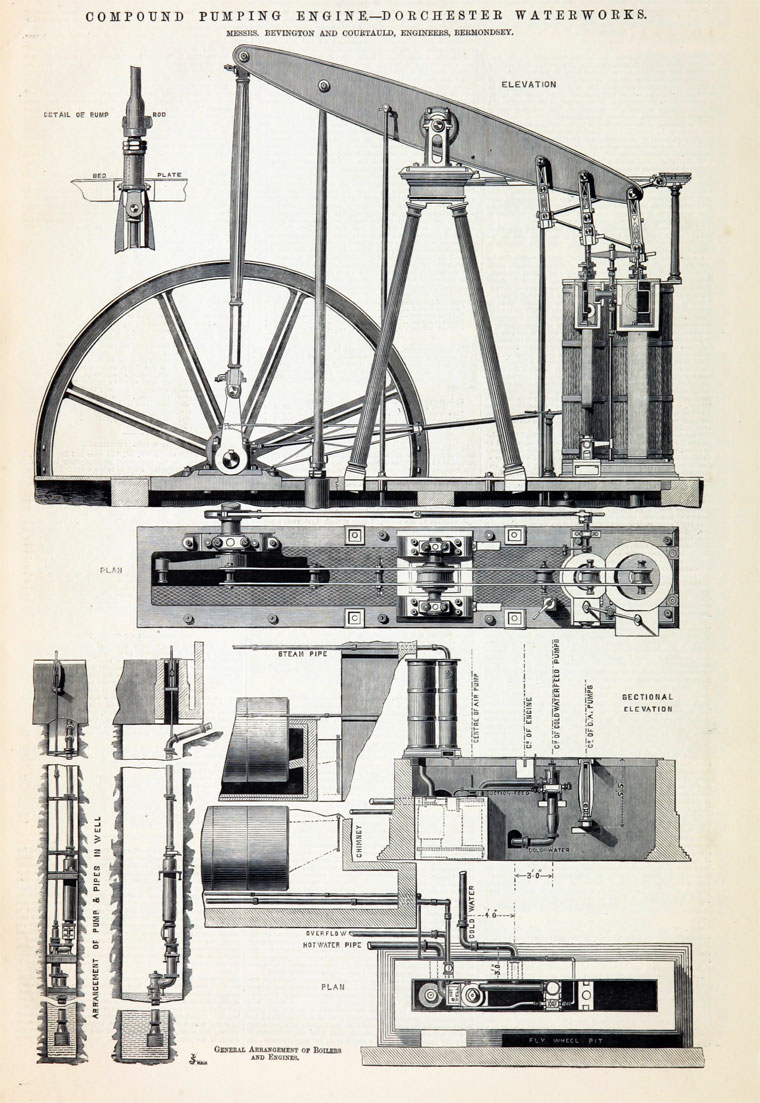 May have previously been Bevington and Topham.

1866 From an article about the Worcester glove factory of Dent, Allcroft and Co: 'The engine-room contains a 10-horse power horizontal engine, by Bevington and Topham, London, and works a pump which takes up the water from the Severn for the general supply of the establishment. Between forty and fifty tons of water are daily taken from the river. The manager of this department is Mr. Lacy, who was formerly connected with the Great Eastern. Near the engine-house is a tea-room overlooking the Severn, so constructed as to be thrown open during the bright warm weather of summer, and closed in when the cooler season commences. Here those of the men employed by the firm who choose to have tea in the afternoon are supplied with this refreshing beverage at an almost nominal cost. A large number avail themselves of this accommodation, and find it great comfort and convenience.'[1]

1866-7 Supplied a four column beam engine to Dorchester Waterworks. Described and illustrated in The Engineer (see image)[2]Photographed and described by George Watkins. The photograph indicates a high standard of design and workmanship, and the engine was very well cared for [3]

1867 Partnership change. '...the Partnership heretofore subsisting between us the undersigned, Thomas Bevington, John Topham, and Sydney Courtauld, in the business of Manufacturing Engineers, Boiler Makers, and Founders, carried on at the Spa-road, in the parish of Saint Mary Magdalen, Bermondsey, in the county of Surrey, under the style or firm of Bevington, Topham, and Courtauld, has been dissolved by mutual consent, as from the 31st day of December, 1867; and that all debts due and owing to or by us in respect of the said business will be received and paid by the said Thomas Bevington and Sydney Courtauld; and that the said business will in future be carried on at the Spa-road aforesaid by the said Thomas Bevington, Sydney Courtauld, and Mr. Charles Stuart Baker, under the style or firm of Bevington, Courtauld, and Baker...'[5]

1869 The firm became Bevington and Courtauld