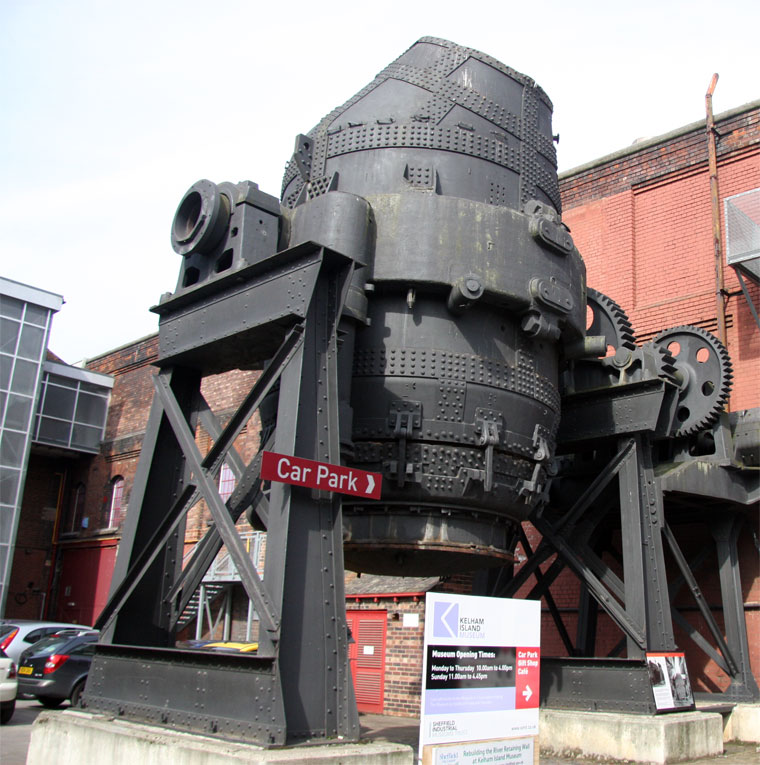 The Bessemer process was the first inexpensive industrial process for the mass-production of steel from molten pig iron.

1855 The process is named after its inventor, Henry Bessemer, who took out a patent on the process in 1855.

A similar process was claimed to have been discovered in 1851 by William Kelly. The process had also been used outside of Europe for hundreds of years, but not on an industrial scale. The key principle is removal of impurities from the iron by oxidation through air being blown through the molten iron. The oxidation also raises the temperature of the iron mass and keeps it molten.

The process is carried out in a large ovoid steel container lined with clay or dolomite called the Bessemer converter. The capacity of a converter was from 8 to 30 tons of molten iron with a usual charge being around 15 tons. At the top of the converter is an opening, usually tilted to the side relative to the body of the vessel, through which the iron is introduced and the finished product removed. The bottom is perforated with a number of channels called tuyères through which air is forced into the converter. The converter is pivoted on trunnions so that it can be rotated to receive the charge, turned upright during conversion, and then rotated again for pouring out the molten steel at the end.

The oxidation process removes impurities such as silicon, manganese, and carbon as oxides. These oxides either escape as gas or form a solid slag. The refractory lining of the converter also plays a role in the conversion - the clay lining is used in the acid Bessemer, in which there is low phosphorus in the raw material. Dolomite is used when the phosphorus content is high in the basic Bessemer (limestone or magnesite linings are also sometimes used instead of dolomite) - this is also known as a Gilchrist-Thomas converter, after Sidney Gilchrist Thomas who had invented a process for dealing with the phosphorus with the help of his cousin, Percy Gilchrist[1].

In order to give the steel the desired properties, other substances could be added to the molten steel when conversion was complete, such as spiegeleisen (an iron-carbon-manganese alloy).

When the required steel had been formed, it was poured out into ladles and then transferred into moulds and the lighter slag is left behind. The conversion process (called the "blow") was completed in around twenty minutes. During this period the progress of the oxidation of the impurities was judged by the appearance of the flame issuing from the mouth of the converter: the modern use of photoelectric methods of recording the characteristics of the flame has greatly aided the blower in controlling the final quality of the product.

After the blow, the liquid metal was recarburized to the desired point and other alloying materials are added, depending on the desired product.

Before the Bessemer process Britain had no practical method of reducing the carbon content of pig iron. Steel was manufactured by the reverse process of adding carbon to carbon-free wrought iron, usually imported from Sweden. The manufacturing process, called the cementation process, consisted of heating bars of wrought iron together with charcoal for periods of up to a week in a long stone box. This produced blister steel. Up to 3 tons of expensive coke was burnt for each ton of steel produced. Such steel when rolled into bars was sold at £50 to £60 a long ton. The most difficult and work-intensive part of the process was however the production of wrought iron done in finery forges in Sweden.

This process was refined in the 1700s with the introduction of Benjamin Huntsman's crucible steel making technique, which added an additional three hours firing time, and additional massive quantities of coke.

In making crucible steel, the blister steel bars were broken into pieces and melted in small crucibles each containing 20 kg or so. This produced a higher quality crucible steel, and increased the cost. The Bessemer process reduced by about ½ the time to make steel of this quality, while requiring only the coke needed initially to melt the pig iron. The earliest Bessemer converters produced steel for £7 a long ton, although they priced it initially at around £40 a ton.

Both Bessemer and Huntsman were based in the city of Sheffield. Sheffield has an international reputation for steel-making, which dates from 1740, when Benjamin Huntsman discovered the crucible technique for steel manufacture, at his workshop in the district of Handsworth. This process had an enormous impact on the quantity and quality of steel production and was only made obsolete, a century later, in 1856 by Henry Bessemer's invention of the Bessemer converter which allowed the true mass production of steel. Bessemer had moved his Bessemer Steel Co to Sheffield to be at the heart of the industry. The city's Kelham Island Museum still maintains one of the UK's last examples of a working Bessemer converter [from Workington, Cumbria] for public viewing.

The Bessemer process revolutionized the world. Prior to its widespread use, steel was far too expensive to use in most applications, and wrought iron was used throughout the Industrial Revolution. After its introduction, steel and wrought iron were similarly priced, and all manufacture turned to steel.

The Bessemer process was so fast (10-20 minutes for a heat) that it allowed little time for chemical analysis or adjustment of the alloying elements in the steel. Bessemer converters did not remove phosphorus efficiently from the molten steel; as low-phosphorus ores became more expensive, conversion costs increased. The process only permitted a limited amount of scrap steel to be charged, further increasing costs, especially when scrap was inexpensive. Certain grades of steel were sensitive to the nitrogen which was part of the air blast passing through the steel.