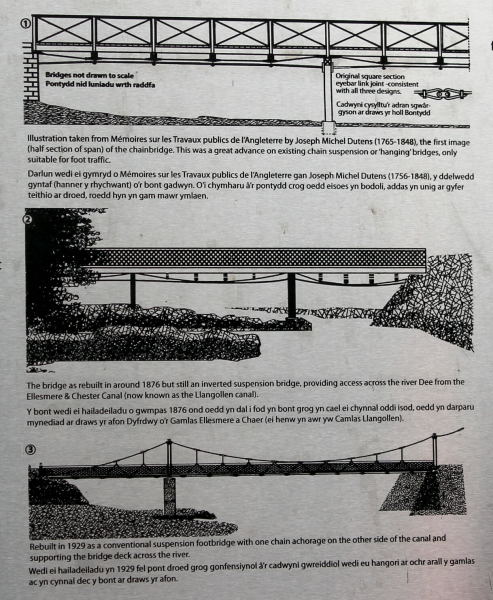 1. From display board at Chainbridge Hotel

2. From display board at Berwyn Station 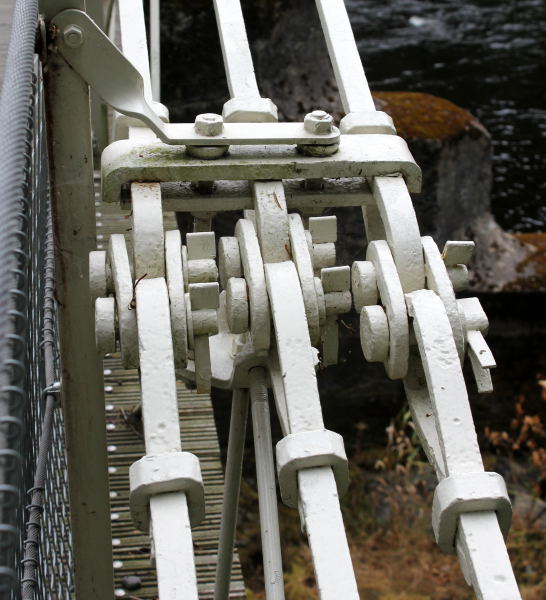 Crosses the River Dee at Berwyn, west of Llangollen.

This is a chain-type suspension bridge connecting the Chainbridge Hotel with Berwyn Station on the Llangollen Railway.

The first bridge was of unusual design, having wrought chains which supported the deck from underneath. It was erected in 1817 by Exuperius Pickering to transport coal, lime and bar iron across the Dee from the Ellesmere and Chester Canal to the Holyhead Road (now the A5), avoiding the Llangollen Bridge toll.

The first bridge deteriorated badly, and was rebuilt c.1876, using the original chains.

The 1876 bridge was badly damaged by floods in 1928. Henry Robertson decided to undertake a major reconstruction as a suspension bridge, reusing the old chains. The work was completed by Brymbo Steel Works in 1929. Deterioration led to its closure in 1984.

The bridge was rebuilt and reopened in 2015, reusing many of the original chain links. 36 new links were made by Shemec Ltd. It is believed that the bridge has the oldest surviving suspension chain links still in use, being made a year or two before those on the Union Chain Bridge.

Design work for the refurbishment project was undertaken by Ramboll UK. See their webpage here.

The wrought iron chains are of peculiar design, having looped ends of generous radius, held closed by an iron ring, which in turn is locked in place by bending the free end of the bar and, in some cases, by driving in a wedge. For comparison, most wrought iron suspension bridge chains either had a simple loop of small radius, fire-welded shut, for example on the Union Chain Bridge, or, more commonly, the links were made as flat bars whose ends were enlarged and bored to accommodate the pins. Whorlton Suspension Bridge has very early examples of this type of link.

The bridge in its present form is of complex construction. The deck is supported on two tensioned chains. These deck chains are supported by the catenary chains in two ways. In photo 12 we see a pair of vertical rods descending from the link between catenary chain links, and thses rods are connected to a bracket to which three tie rods are attached. In photo 5, nearest the camera, we see a vertical hanger which supports the deck chain by a hook. Each diagonal tie bar descends to a mitred block, where it meets another diagonal tie, and the mitred block straddles and supports the deck chain.

The wooden decking is bolted to pairs of wooden joists, and these are attached to the deck chains by brackets (photo 15).