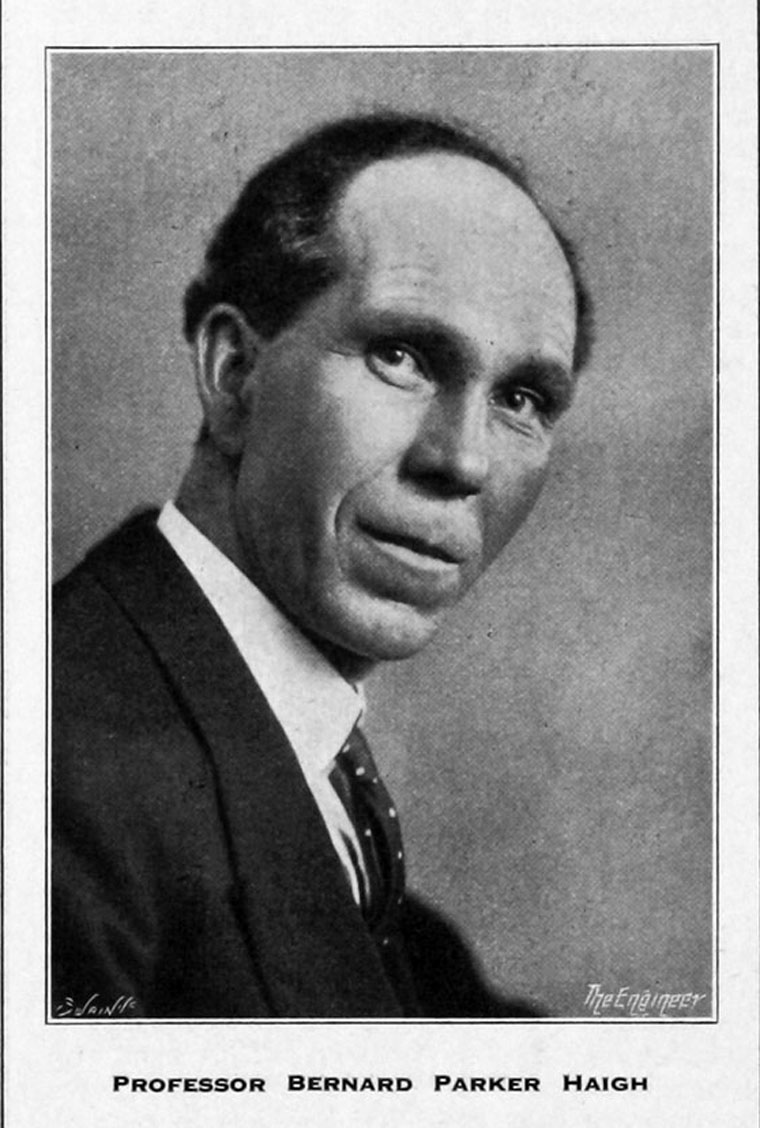 "...sorrow will be felt in engineering circles throughout the country at the news of the death on January 18th of Dr. B. P. Haigh, Professor of Applied Mechanics at the Royal Naval College, Greenwich. Professor Haigh had been in poor health for two or three years past, but he bore his illness cheerfully and seemed to be making headway against it. Doubtlessly, however, the complaint-diabetes-from which he suffered reacted on his general strength and laid him open to the con..."[More].

Professor BERNARD PARKER HAIGH, M.B.E., D.Sc., was well known to a wide circle of engineers as a lecturer of exceptional gifts and a research worker of outstanding abilities. His wide and varied practical experience, combined with his talent for presenting complicated problems in a simple way, gave a special value to the various technical papers of which he was the author. Moreover, he rendered important services to the engineering profession, both by his ability to deal with novel and difficult problems, and also by his untiring work on the various research committees on which he served during his career.

He was born in Edinburgh in 1884 and was a scholar at Allen Glen's School, Glasgow, from 1896 to 1901. In the latter year he obtained the Allen Glen University Exhibition, and this, with other scholarships and bursaries awarded by the University of Glasgow, enabled him to complete his technical training there in 1904, when he graduated with distinction. During the years 1904-9 he served his apprenticeship with Messrs. Bruce, Peebles and Company, of Edinburgh, and for the last two years of that period was personal assistant to Mr. J. L. La Cour the chief engineer, whom he assisted in his private consulting practice in Germany.

He returned to Edinburgh in 1909 as leading draughtsman to Messrs. John Brown Brothers and Company, Ltd. (sic), for whom he was engaged on the design of steam, hydraulic, and electric steering gear, in connection with which he took out several patents. During this period he became associated with Professor Archibald Barr, at Glasgow University, and in later years acted as his assistant, chiefly on electrical and hydraulic work. In 1913 he began his long association with the Royal Naval College, Greenwich, which lasted until his death.

His first appointment was that of lecturer, and he later became assistant professor, and in 1921 was appointed to succeed Sir J. B. Henderson as professor of applied mechanics. During the remainder of his career he devoted much of his time to the study of problems of the fatigue of metals, and it was chiefly due to his work in this field that his reputation was established. In 1915 he was awarded the degree of D.Sc. by the University of Glasgow for a thesis on the subject.

Perhaps his most notable achievement was the electromagnetic testing machine which he devised for fatigue tests. But his work covered a much wider field than the testing of materials. Thus during the war of 1914-18 he acted as chief designer in the Paravane Department of the Admiralty, with direct responsibility to the inventor, Commander Sir C. D. Burney, C.M.G.; and he subsequently served on several special committees of the Admiralty, and upon various panels of the British Standards Institution.

Professor Haigh was elected a Member of the Institution in 1931, and he rendered valuable services as a member of the Welding Research Committee, for whose programme he carried out a large amount of experimental research work. He was also the author of two papers dealing respectively with what he termed "prism hardness", and stresses in non-circular tubes, the latter forming an Appendix to the Second Report of the Welding Research Committee. In addition he presented a number of technical papers to various other engineering institutions.