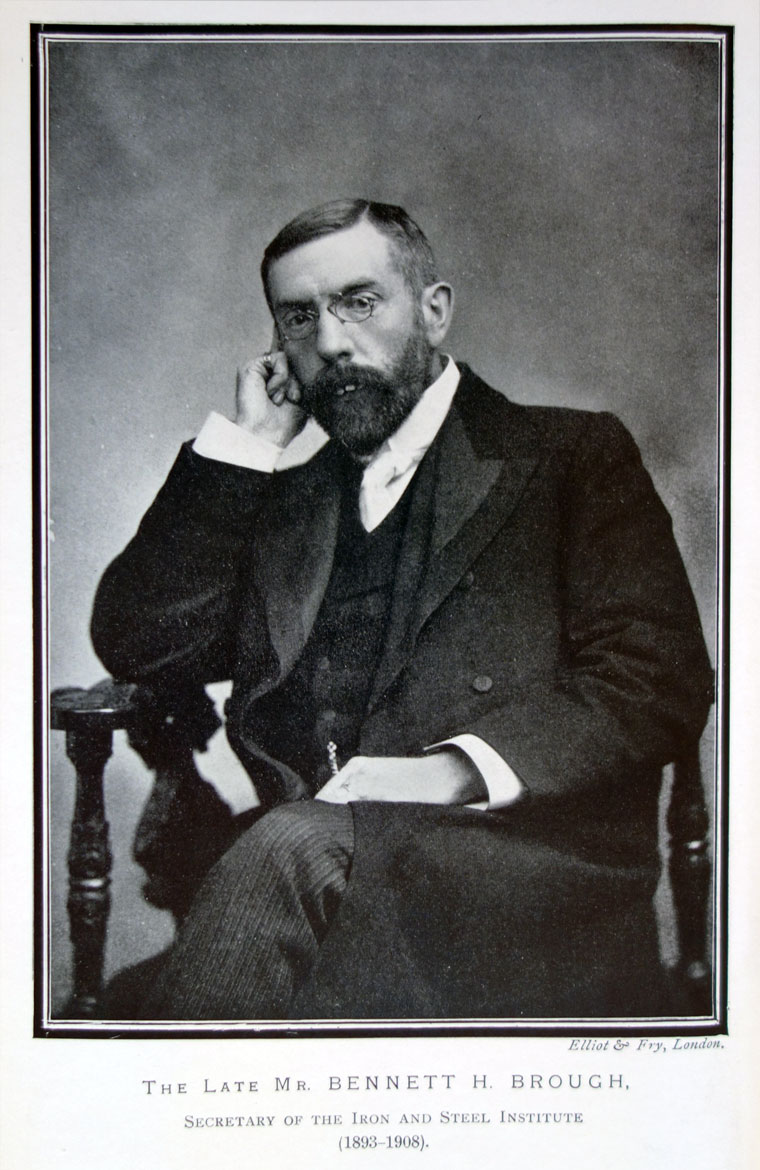 BENNETT HOOPER BROUGH, Secretary of the Iron and Steel Institute, died at Newcastle-on-Tyne, after a short illness, on October 3, 1908, at the close of the Middlesbrough meeting. By his death the Institute has been deprived of the services of one who steadfastly devoted himself to the advancement of its interests from the time of his appointment as Secretary in 1893 to that of his untimely decease.

Mr. Brough was born at Clapham in 1860, and was the eldest son of John Cargill Brough, F.C.S., a man of brilliant literary and scientific attainments, and one of a family distinguished in literature, science, and dramatic art. Mr. J. C. Brough was for some time editor of The Chemist and Druggist, and was subsequently appointed librarian of the London Institution in Finsbury Circus. After some years of ill health he died in 1872, leaving three orphan children unprovided for. In these circumstances, three of his friends, Michael Carteighe, William Chandler Roberts (afterwards Sir William Roberts-Austen, President of the Iron and Steel Institute, 1899-1901), and Alfred Marks started a fund for the education and maintenance of the children. With this help Bennett H. Brough was sent, first to the City of London School, and then to the Royal School of Mines in Jermyn Street, where he obtained the degree of Associate. After this he became a student at the Royal Prussian Mining Academy at Clausthal, where he laid the foundations of friendships which, in after years, were of the greatest value not only to him, but to the Iron and Steel Institute.

In 1882 he was appointed assistant to Sir Warington Smyth at the Royal School of Mines then removed to South Kensington.

In 1893 he was made Secretary of the Iron and Steel Institute, but long before this date he had been associated with the Institute, having acted as Abstractor for the Journal since 188, and having assisted at several of the foreign meetings. For this position Mr. Brough possessed exceptional qualifications - a natural aptitude for languages and literature, cultivated under such masters as Dr. Abbott and Dr. Percy; a thorough scientific training in mining, metallurgy, and geology; a retentive memory, a kindly disposition, an infinite capacity for taking pains, and a single-minded devotion to his work. His natural modesty and generous appreciation of the merits of others, together with his great ability and genial humour, mused him to make many friends both at home and abroad, and these friendships contributed not a little to the benefit of the Institute, especially as regards its international activities.

He was a member of several learned societies, and at different times was member of Council of the Institute of Chemistry, of the Chemical Society, the Institute of Mining Engineers, the Chartered Institute of Secretaries, and the International Association for Testing Materials, to which latter association he was acting, at the time of his death, as Honorary Secretary for Great Britain. He was the author of numerous papers, including two sets of Cantor Lectures for the Society of Arts, and his work on Mine Surveying, now in its thirteenth edition, continues to be the standard text-book on that subject in the English language. He was Chief Examiner in Mining to the Board of Education, and External Examiner to the Camborne School of Mines and to the Royal School of Mines. He served on the juries of several exhibitions, including that of the metallurgical section of the Franco-British. For his services in connection with the Stockholm meeting of the Iron and Steel Institute in 1898 he was made a knight of the Order of Wasa by the late King of Sweden and Norway.

Mr. Brough was taken suddenly ill on the third day of the Middlesbrough meeting. By the kindness of Sir Hugh Bell and the generosity of the Reception Committee the best medical and surgical aid was promptly procured, and he was taken on Friday to a nursing home at Newcastle-on-Tyne, where an operation was performed by Mr. Morison; but nothing availed to save his life, and he died peacefully on Saturday evening. The funeral, which took place on Friday, October 9, was numerously attended by personal friends, and by members of the various societies and institutions with which he had been connected, the Iron and Steel Institute being represented officially by Sir Hugh Bell, Bart., President, and by Mr. J. E. Stead, F.R.S., Member of Council. He leaves a widow and two young children, a boy of twelve and girl of eleven years of age.