All photos by courtesy of Mr D Griffin of Waterford 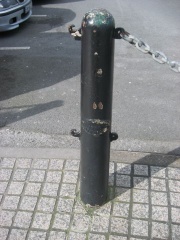 Early years: Established in the 1780s, making iron and brass castings, iron forgings, etc. Made the ironwork for the first timber bridge over the River Suir in 1793. In 1815 he introduced gas lighting to Waterford, starting with his own home. From 1824 he improved the city's water system and supplied many iron pipes, valves, hydrants and pumps. The firm also undertook much shipwrights' work[1]

1825 'WATERFORD GAS WORKS. TO MASONS, BUILDERS, &c. PERSONS desirous of contracting for BUILDING the BOUNDARY WALLS. OFFICES, STORES, &c. for the above Works, are requested to send in Sealed Proposals to the Office of Messrs. IVIE & MORTIMER, Henrietta-street, on or before the 23d of the present Month, addressed to Mr THOMAS S. PECKSTON. Reference can be had to the PLANS and SPECIFICATION on applying to Mr BENJAMIN GRAHAM, Ironfounder.'[2]

1833 'NOTICE. JOHN BEARE, Pall Mall East, London, CIVIL ENGINEER, PATENTEE OF THE FOUNTAIN PUMP, HAS granted to RICHARD and BENJAMIN GRAHAM, Waterford, Smiths, Iron Founders,and Plumbers, the exclusive right and license make and erect those superior Hydraulic Machines, for the City of Waterford, and for the Counties Waterford, Tipperary, Kilkenny, Carlow, and Wexford.
The Patent FOUNTAIN PUMP is capable of raising water to any height, with half the power required to work any other Pump or Engine that has been hitherto used, and the wear is not one-fourth of what other machines are subject to, as they avoid friction, and leakage. A short view the working parts by any person acquainted with Pumps or machinery would fully convince them that what is above stated is correct. The displacing of the old Pumps and erecting the Fountain Pump is rapidly progressing throughout England and Scotland. They are particularly adapted for Ships, as they are not subject to be stopped or choked, always retaining their column of water. It is intended that an Engineer from Mr. Beare will visit Ireland once a year, that he may satisfied that any work done by those whom he his or may grant license, will be perfectly executed.'[3]

1855 'Waterford Manufacture.— We have seen some very beautiful and ingenious mechanical drawings of a patent separator, for cleaning gold and copper ores, by Mr. Henry Sinnott, under the direction of John Petherick, Esq., Bonmahon. The casting of the iron and machinery, for which purpose those drawings are intended, is to be executed by our talented and enterprising fellow-citizen Benjamin Graham, Esq. This machinery is intended for the "Consolidated Cobre Copper Mines, Cuba." We believe the work will be done considerably cheaper than it could be obtained in any other country. However, that does not take away from the credit due to Mr. Petherick, who, since his arrival in tins county, has been as anxious to encourage the honest industrious Irish artizan as he has been desirous of forwarding the prosperity of the county generally. It is consoling and satisfactory to find that Waterford men are competent to execute in a superior manner works such as those entrusted to them the esteemed and justly respected Mr. Petherick.'[4]

1857 He was Treasurer of Waterford Scientific Mechanics' Institute.[5]

1865 'Thanks. BENJAMIN GRAHAM returns his best thanks to his Friends and Fellow-Citizens for their great exertions in extinguishing the Fire which occurred in his Foundry on the night of the 11th Inst., particularly to the Mayor, Magistrates, Officers and Men of the 53rd Regiment (with the Barrack engine), the Constabulary, Strangman Goff. Esq., P. K. Reid, Esq., and Messrs, Harvey, with their respective Engines.'[6]