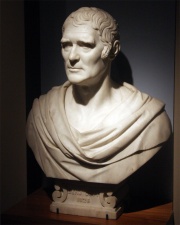 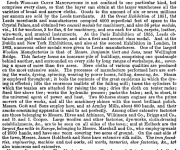 1817 Formerly Wormald, Gott and Wormald. Whole process of the manufacture of cloth from the breaking of the wool to the finished piece. A very large establishment at Drony-Laith; an extensive and handsome building at Armley; and another near Kirkstall for making blankets. [1]

1866 'One of the largest Woollen Manufactories is that of Messrs. Benjamin Gott and Sons, near Wellington Bridge. This factory forms an immense pile of buildings, comprising one quadrangle behind another, and surrounded on every side by long ranges of workshops, &c., covering a space of more than five acres. Here cloths of various qualities are produced on the most extensive scale. The processes of manufacture performed lure are sorting the wools, dyeing, spinning, weaving by power looms, fulling, dressing, &c. Steam is employed throughout; it boils the contents of the great cauldrons in which the dyeing is effected; lifts the enormous mallets of the fulling mill; turns the cylinders to which the teazles are attached for raising the nap; dries the cloth on tenter racks; fixed tier above tier; works the hydraulic presses; packs the bales; and, in short, is the universal agent of power and heat. Two 80-horse steam engines are the prime movers of the works, and all the machinery shines with the most brilliant polish. Messrs. Gott and Sons employ here, and at Armley Mills, about 800 hands, and their smoke-consuming apparatus is said to act perfectly. Among other extensive factories are those belonging to Messrs. Hives and Atkinson, Wilkinson and Co., Briggs and Co., and D. and I. Cooper. Large woollen and other factories, dye-works, cloth-dressing establishments, &c., are to be seen on all sides of the town; and at Holbeck are the largest flax mills in Europe, belonging to Messrs. Marshall and Co., who employ upwards of 2,500 hands, and have one room covering two acres of ground. On the east side of the town, Messrs. James Holdforth and Sons have extensive silk mills.'[2]