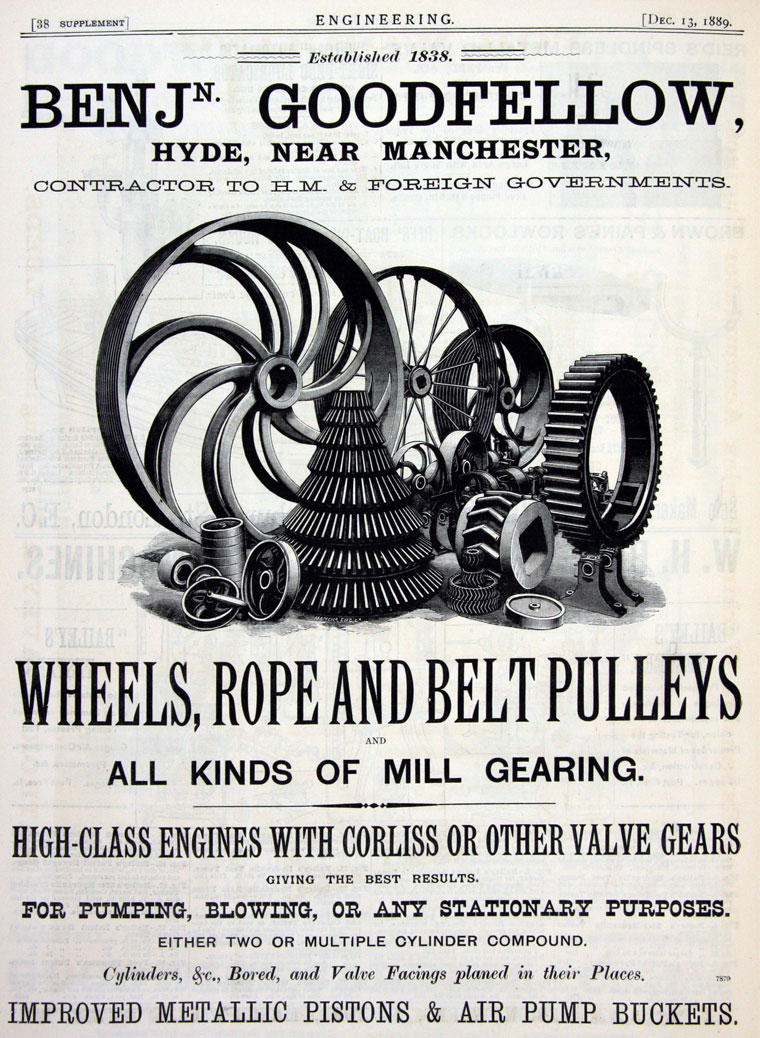 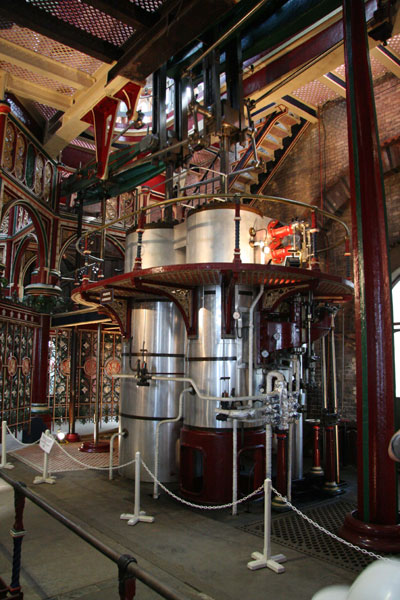 of Hyde, near Manchester

c.1838/1840 Benjamin Goodfellow (1811-1863) established works of his own, for the manufacture of the steam-engine piston known by his name, and for general engineering work

Stationary engines. (B. Goodfellow and Co).

1857 Patent to Benjamin Goodfellow, of Hyde, in the county of Chester, Engineer, in respect of the invention of "certain improvements in the construction of steam boilers, and in the mode of supporting steam boilers on their seatings."[1]

1860 Made engines and boilers for the cotton spinning mill of Peter Arkwright at Mellor (erected 69 years earlier by Samuel Oldknow).[2]

1867 The 'executors of the late Mr. Benjamin Goodfellow' supplied a pair of engines to the Quarry Street Mills of Robert Platt.[3]

1879 Frome, Somerset: 'THE WATER WORKS.- At an adjourned meeting of the Local Board, held on Friday, the Water Supply Committee recommended the board to adopt the tender of Mr. Benjamin Goodfellow, of Hyde, Manchester, for the manufacture and erection of two high pressure condensing steam engines, with boilers, pumps, and appurtenances, at £1800: Fourteen tenders had been received.'[4]

1879 'OPENING OF THE EMPRESS SPINNING AND WEAVING MILL. Another mill has been aided the Wooing sod Canary of Bombay. The Empires. Mill a Chinchpoohly was formally opened on Saturday .... In the erection of this mill it has been the aim and desire of the managers that the engine's machinery should be of the best and with the latest improvements, and with this view contracts were entered into with Mr. Benjamin Goodfellow of Hyde near Manchester for one pair of compound Tandem horizontal engines, each five feet bore, to run 50 revolutions per minute, with two high-pressure cylinders, 20 inches diameter, and two low pressure cylinders, each 30 inches diameter, with corless [Corliss] valves. With these engines, we have introduced for the first time in Bombay the principle of rope-driving, with which we have every reason to be satisfied. [5]

1884 presumably became Goodfellow and Matthews when Robert Matthews was made a partner.

1899 Supplied duplex tandem refrigerating machinery for the 'Star of Australia' built by Workman, Clark and Co, 'the largest cold air machine yet fitted on board of any vessel'.[8]

Between 1901 and 1903 Benjamin Goodfellow carried out major work on the four James Watt and Co Beam Engines at Crossness Pumping Station. Originally 125-hp single cylinder beam engines, these engines were tripled by replacing the original 48" diameter cylinder with a new 44" which became the Low Pressure, together with a new 33" IP cylinder alongside it (as in a Woolf compound), with the new 19" High pressure cylinder in tandem with it below floor level. All cylinders were fitted with Corliss valves.

1905 "NOTICE is hereby given, that a General Meeting of the Members of the above named Company will be held at No. 12, Exchange-street, Manchester, on Monday, the thirteenth day of November next, at 4 o'clock in the afternoon precisely, to receive the Liquidators' report, showing how the winding up of the Company has been conducted and its property disposed of, to hear any explanation that may be given by the Liquidator, and to pass an Extraordinary Resolution as to the disposal of the books, accounts, and other documents of the company"[9]

1906 "... Joseph Stubbs, Machine Makers and Iron Founders, creditors of the Goodfellow Engineering Company Limited, applied for an Order winding up the company[10]