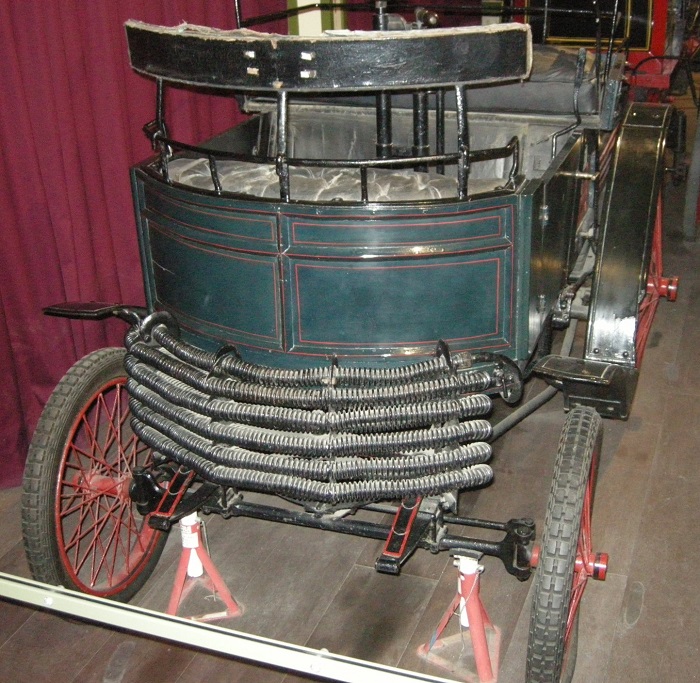 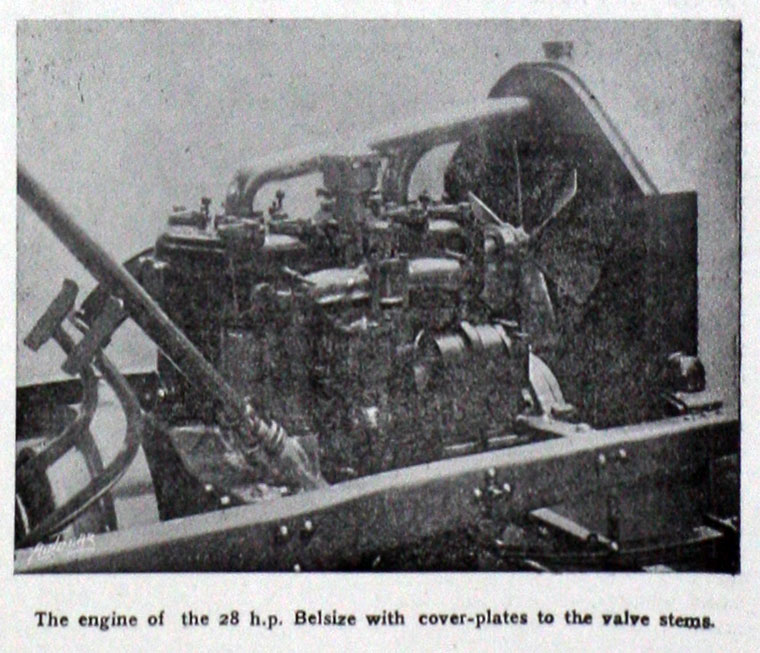 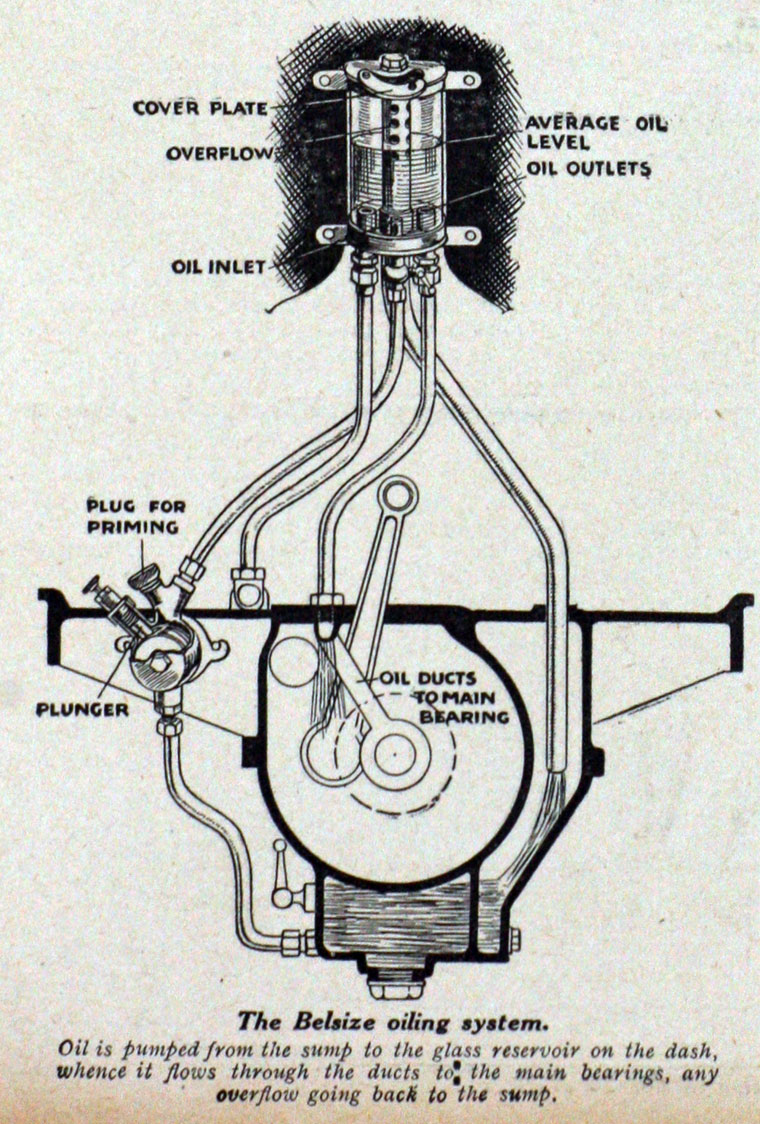 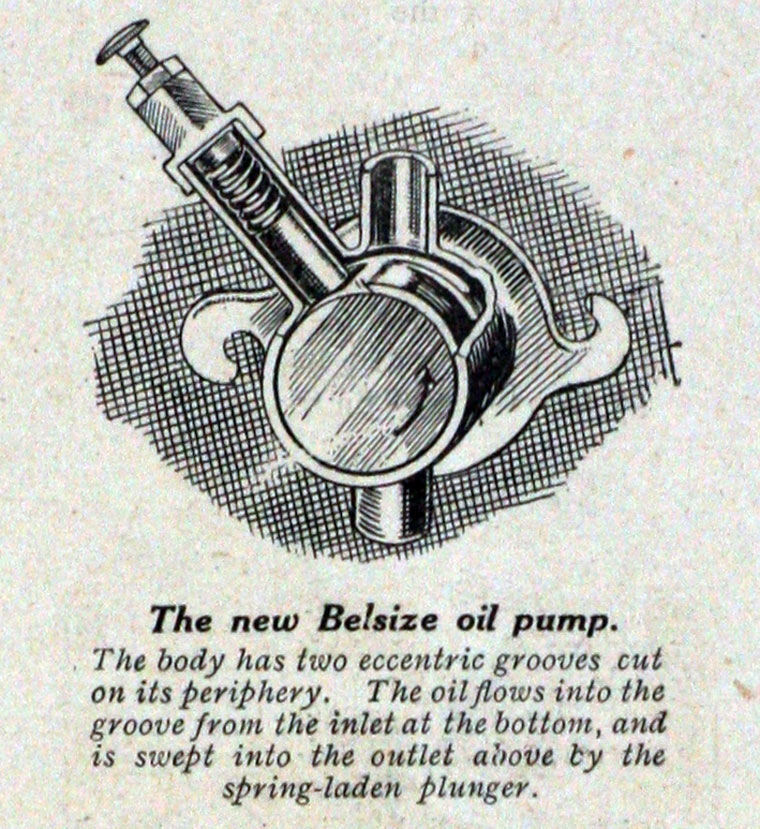 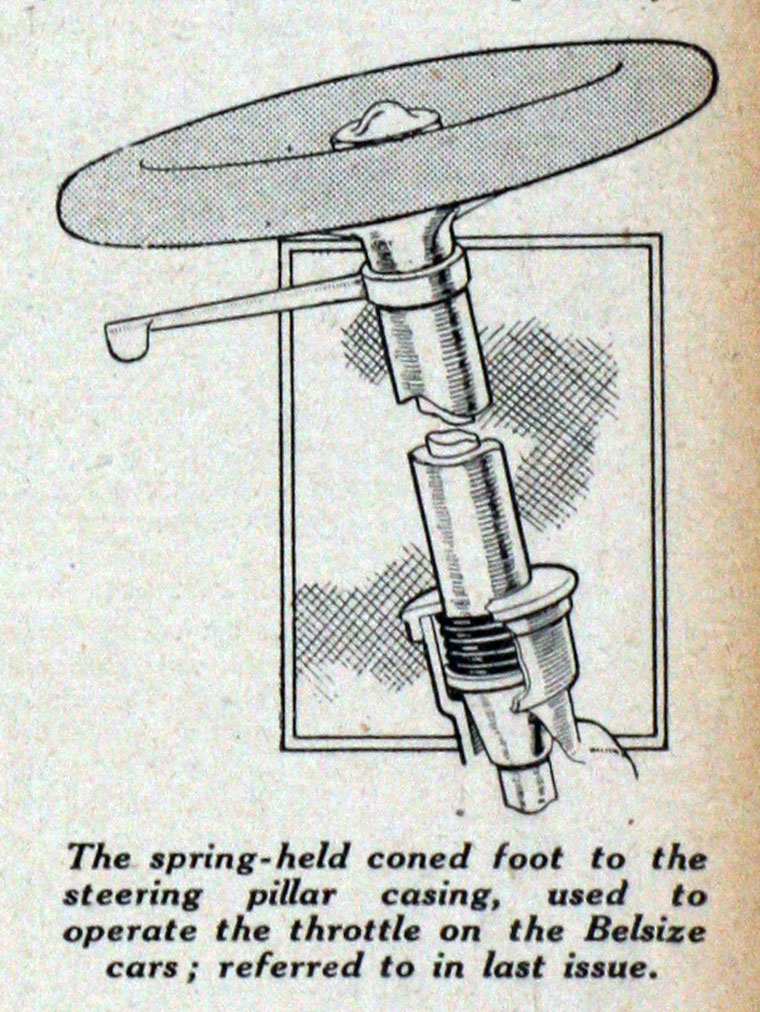 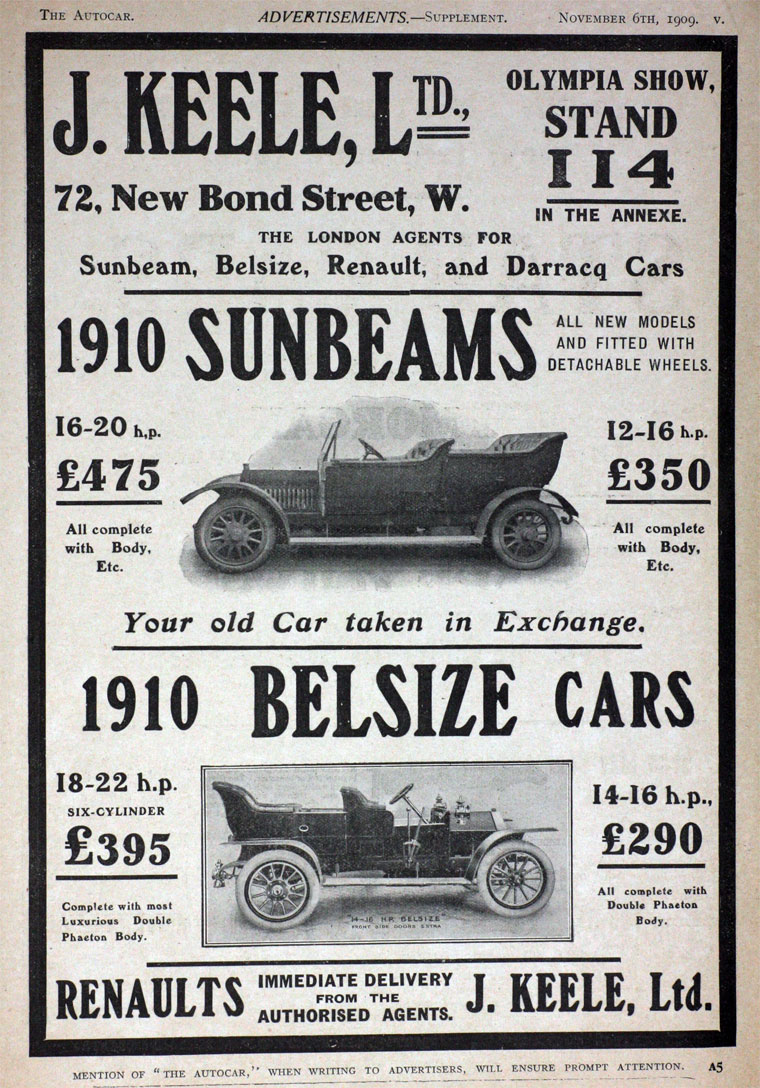 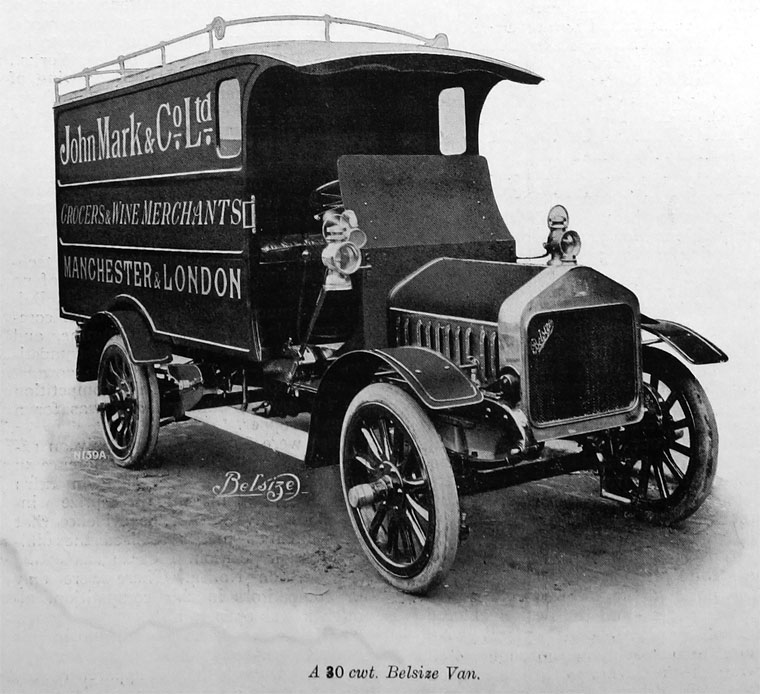 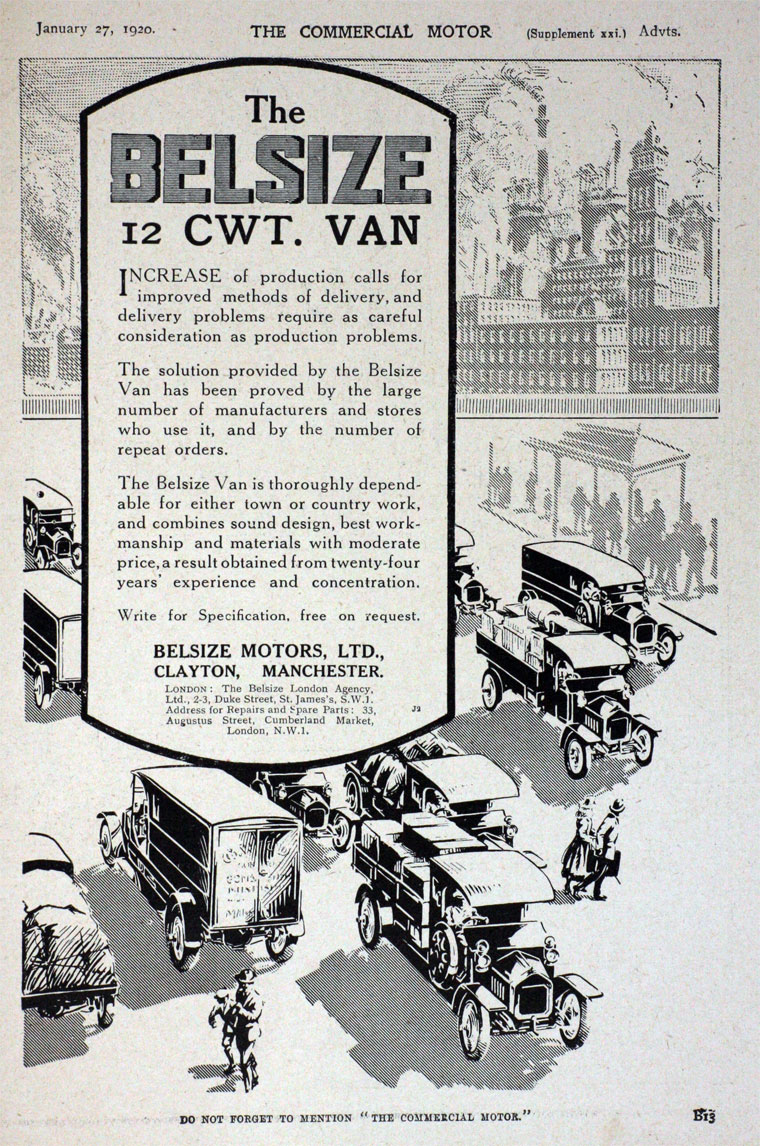 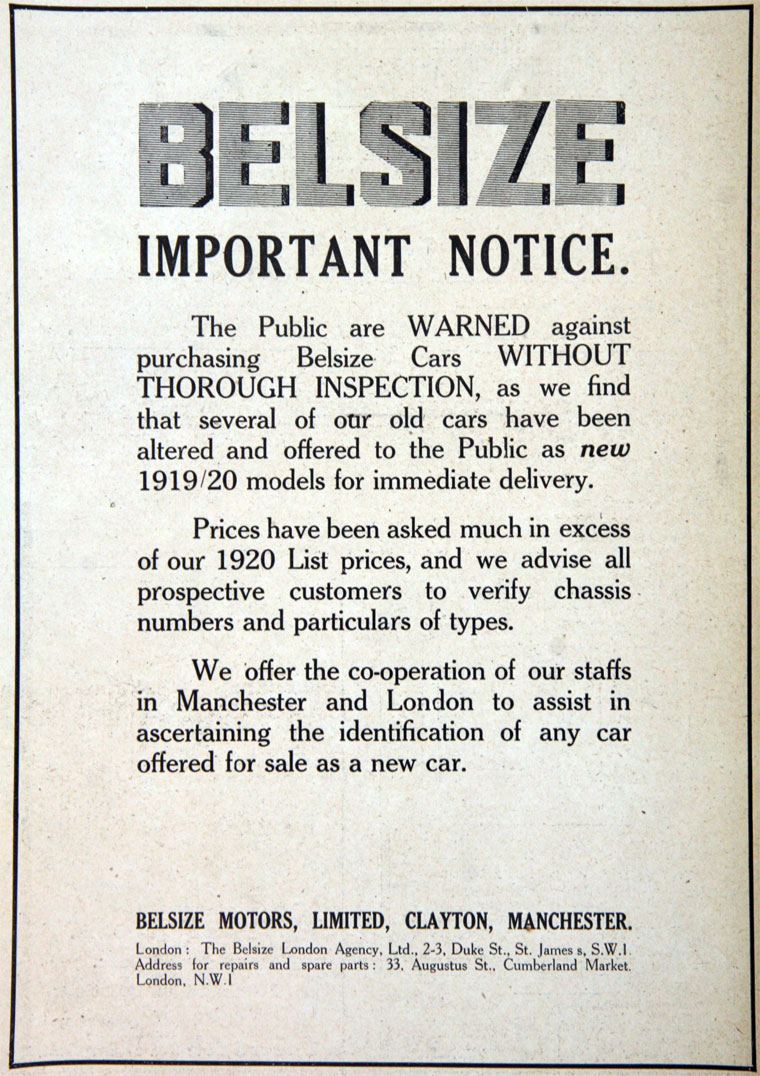 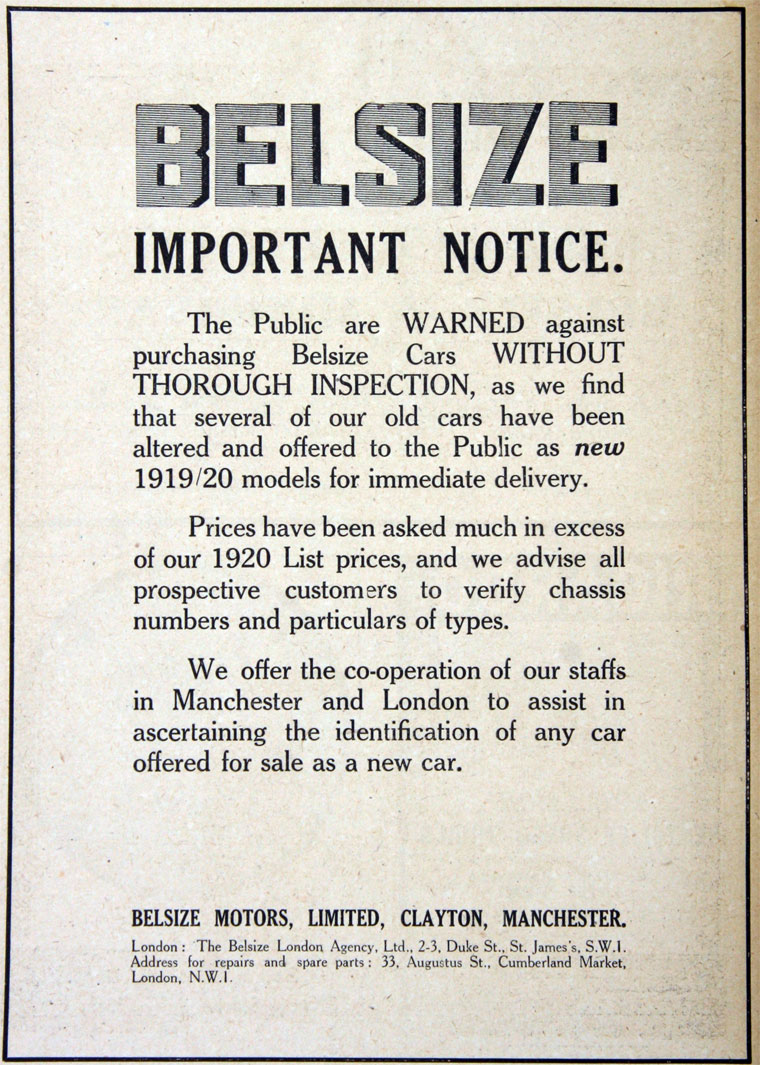 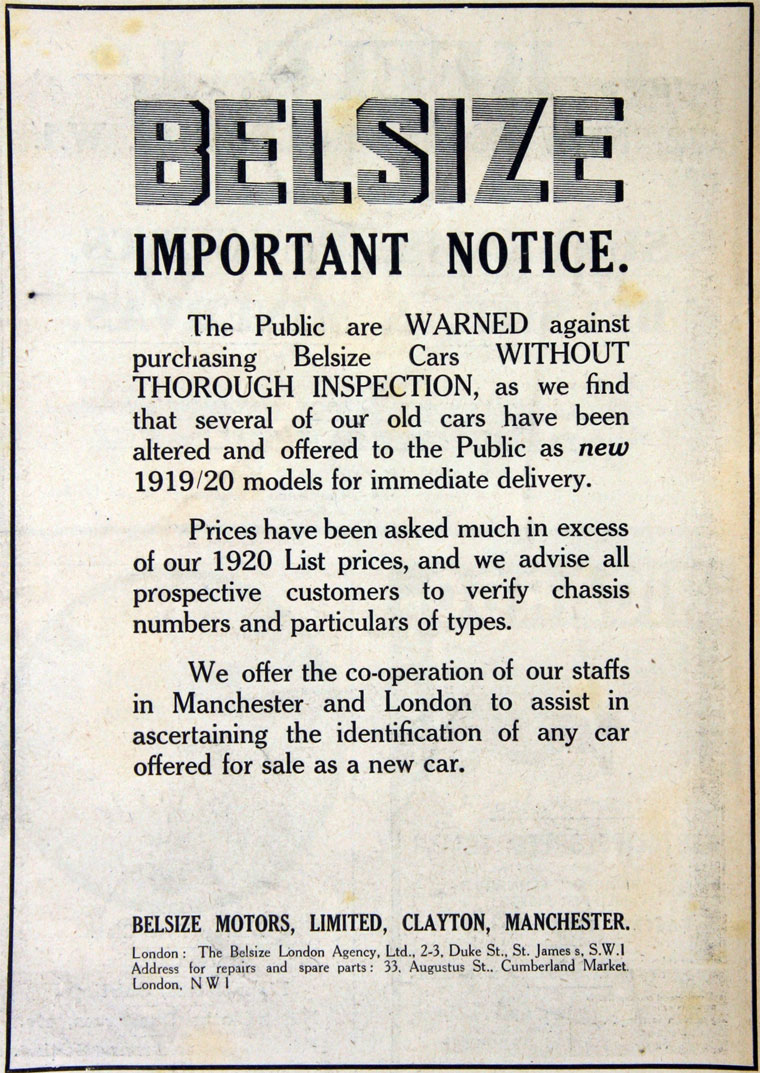 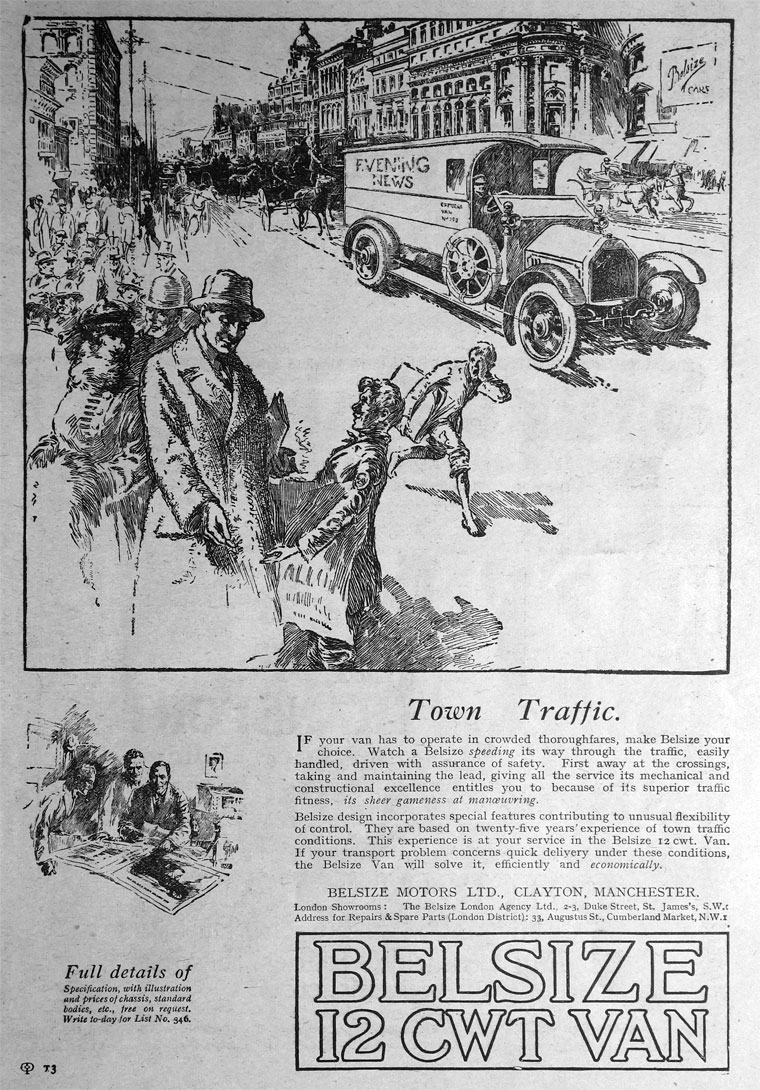 The first cars were made in 1897 but were called Marshalls and were very similar to the French Hurtu, itself a Benz replica. Agencies were established in London and Dublin and the car gained a Gold Medal for efficiency at the 1899 London exhibition. A new more modern four seat model appeared in 1901 with twin cylinder engine made by Buchet and was the first to carry the Belsize name as the "Marshall Belsize".

1901 Belsize Motors formed and was based in Clayton, Manchester. The company was founded in 1896 by Marshall and Co and took its name from the Belsize Works where bicycles had been made by the Manchester Cycle Manufacturing Co until 1898. The Belsize factory was located near the southern end of Clayton Lane, on the west side of the road. [1]

1903 The company name was changed to Belsize Motors and Engineering.

1906 Advert says details can be obtained from W. Bath and Son of London and King's Lynn.

Before World War I they were a major player in the UK motor industry employing 1,200 people and making up to fifty vehicles a week. A bewildering range of models were made including taxis, commercial vehicles and fire engines with engines of up to 14.5 litre capacity.

After the First World War they followed a single model policy at first with the 15 hp of 2,798 cc but this was joined in 1921 by the Belsize-Bradshaw with a 9 hp 1,294 cc V-twin engine made by Dorman and designed by Granville Bradshaw that was partly air and partly oil cooled. This gained a reputation for being unreliable and was dropped in 1924. It was replaced by a 1,250 cc conventional 4 cylinder model, the 10/20 or RM, and a 1,696 cc six the 14/30. The latter was at last an up to date car with overhead valves, four wheel brakes and a four speed gearbox but at £415 to £650 it was expensive when compared with the opposition. It was, however, too late and the company which had been in the hands of the receiver since 1923 ceased trading in late 1925.

1920 November. Belsize Motors of Manchester exhibited at the Motor Car Show at Olympia and the White City with cars having a 20.1 hp rating. [16]

The company also tried to build a 2,496 cc, straight eight engine but this probably never got past the prototype stage although it was advertised at £1,050.

By 1911 the factory was over 7 acres in extent and employed over 1200 people in busy times. Part of the new extension consisted of 'that huge building formerly known as the Old Trafford Ice Skating Rink', re-erected at Clayton for building car and taxi bodies.[18]

Note: The business evidently took over the Belsize Works formally occupied by the Manchester Cycle Manufacturing Co, but this could not have happened before July 1898, when the factory was advertised for sale.