Grace's Guide is the leading source of historical information on industry and manufacturing in Britain. This web publication contains 150,335 pages of information and 235,380 images on early companies, their products and the people who designed and built them. 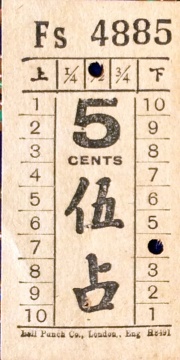 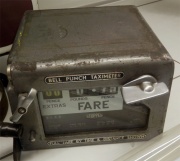 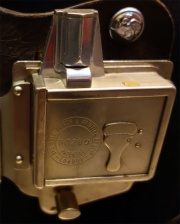 Exhibit at the London Transport Museum 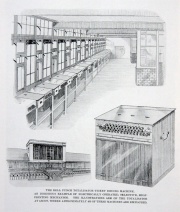 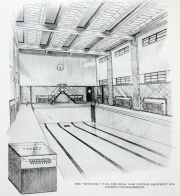 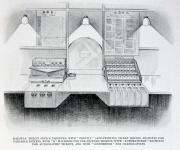 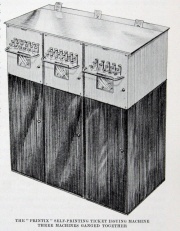 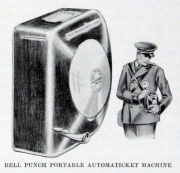 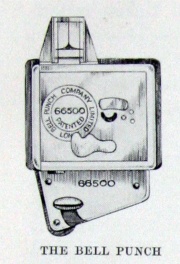 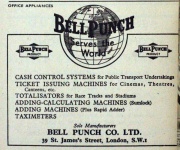 Exhibit at the Museum of Transport, Greater Manchester 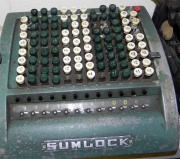 1878 Company founded. The original Bell Punch Co, was incorporated. It was established to acquire the patent rights of an American hand registering ticket punch which had already been adopted by a few tramway companies, including the North Metropolitan Tramways, London Tramways, and companies operating in Glasgow, Liverpool and a few other towns. Before this, the general tariff system on involved either a universal fare, or the zoning if routes with a flat fare charged and collected in each. The check was usually by means of tickets issued from a roll. The punch, used with a series of varying priced pre-printed tickets, enabled tickets to be issued for any length of journey. It was then possible for overlapping fare stages to be introduced, so passengers had full in distance for the fair paid.

1884 John Melton Black joined the board and soon began to develop a small rotary ticket printing machine designed to bring considerable economy to the printing of tickets.

1889 The company was reconstructed to provide capital for the building of these small rotaries, the acquisition of a suitable factory and the establishment of an engineering shop for building the company's machines and the manufacture of bell punches which had originally been imported from America. Black improved the design of the punch and introduced the box or breast punch which gained rapid favour over the hand punch as it left the conductor's hands free. A site was acquired in Tabernacle Street, near Finsbury Square, London, a factory was built and two cottages in Tabernacle Street were used as offices.

1891 The company arranged with the London General Omnibus Co, (LGOC) to trial the new system over some of its bus routes provided that Bell Punch would itself operate the trial and provide equipment and operating staff. Ticket racks were erected in part of the company's factory from which the trial was operated. It proved successful and one route after another was added to the trial. Eventually LGOC took over the operation, and contracted to extend the system over all routes. It established its own ticket office in City Road, to be within easy distance of the supply of tickets.

From 1891, Bell Punch supplied tickets to London buses without a single break. The LGOC absorbed the London Road Car and the Vanguard businesses, later itself being absorbed by the London Underground group which, in turn, was embodied in the London Passenger Transport Board — now the London Transport Executive.

1894 The company suffered a disastrous fire which started in a bedstead manufacturing concern down the street. The intervening premises were occupied by furniture manufacturers. The fire spread rapidly and was one of the largest London fires of that century – many acres of buildings were completely gutted with the company's recently-built factory in the middle of the area.

Temporary premises were taken in Charterhouse Square where flat-bed printing presses and numbering machines were installed for ticket production, and the construction of new rotary machines was rapidly undertaken. The site of the gutted works was cleared and plans prepared for an enlarged factory area.

1895 The building was completed and occupied at the end of the year.

Rapid expansion took place in the early 1900s when many of the company-owned tramways operating in the provinces were taken over by the municipalities under powers granted by an Act of Parliament, and it was then that the extensive electrification of tramway systems took place.

By 1912, it was obvious that it would be necessary to seek additional accommodation.

1914 War came and the opportunity was taken to search for a country site - Upper Colham Mill at Uxbridge, then occupied by Bell and Croydon. The directors acquired this property with possession six months after the termination of hostilities.

1919 Plans were prepared and building started.

1922 The company transferred to the country piecemeal, and the move was completed by that year.

1927 Control Systems was incorporated, for the purpose of acquiring and consolidating the direction of the growing diverse activities of the Bell Punch Co.

1929 The Racecourse Betting Control Board was established and the company obtained a contract for the manufacture of 1,000 totalisator ticket issuing machines which became the standard used by the Board. This success was recognised in America and the Bell Punch Totalisator Ticket Issuing Machine became standard equipment employed by the American Totalisator Company.

1940 Then came the development of a full keyboard calculator which was eventually developed over the few years before the recent war and, under the name Sumlock, it was launched in 1940.

Paper consumption for conversion into tickets was high so the company acquired its own paper mill — Isaac Warwick and Co, of Wraysbury, on the River Colne, near Staines. It had been supplying the company with ticket middles since about 1896.

WWII The company's contribution in the provision of war equipment was important and, in collaboration with the Admiralty and the Royal Aircraft Establishment in Farnborough, it designed, developed and manufactured many highly technical instruments. There was the A.P.I. (Air Positioning Indicator), a mechanical navigating instrument first used by the Pathfinders and subsequently fitted to a large number of bomber aircraft.

Other products included the torpedo director – an instrument which enabled torpedo-carrying aircraft to launch their missile when they were apparently taking avoiding action, and the Fall of Shot Indicator — used on warships for identifying fall of shot from particular guns. Naval equipment also included the Target Bearing Indicator and Pelorous Sighting Gear for the laying of guns on warships and the Corrector Compass Coil, applied to all ships for countering the effect of the degaussing gear fitted to ships for protection against magnetic mines.

The design for the first Bell Punch calculators, the Plus Adders, was bought from Petters of Yeovil, Somerset, the well known manufacturers of oil engines and the company from which Westland had developed.

By 1961 the Sumlock Anita Electronics was founded producing the 'Anita' electronic desktop calculator.

1971 Maker of transport ticket machines and totalisators; part of the Lamson Group

1973 Sumlock was bought by Rockwell, an American firm.

1986 The Portsmouth factory was closed.