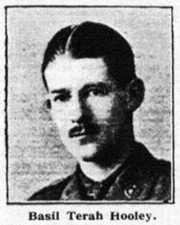 Major Hooley with his wife. 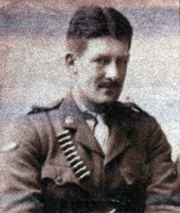 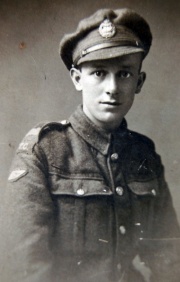 HOOLEY, BASIL TERAH, M.C., Capt., Acting Major, Tank Corps, yst. s. of Terah Hooley, of Risley Lodge, co. Derby, J.P., by his wife, Mary Eliza, dau. of J. G. Swaffield, of Melbury. Osmond, co. Dorset; b. Risley Lodge aforesaid, 8 June, 1892; educ. Spondon Hoise School, near Derby, and Uppingham; was a Motor Engineer; volunteered for active service, and was gazetted 2nd Lieut, 7th Sherwood Foresters (Robin Hood) 4 March, 1915, being promoted Lieut. 3 Oct. following; was transferred to the Machine Gun Corps, Infantry, 24 Aug, 1916 and then to the Tank Corps, 30 Nov, of the same year; promoted Temp Capt, 25 May 1917 and Acting Major 17 May 1918; served with the Expeditionary Force in France and Flanders from 24 Aug 1915, to 24 Aug 1916; transferred as above, and was in England training for 10 months; went back to France with the Tank Corps 24 June 1917, and died whiles home on leave from the front, at Risley Lodge, 28 Oct 1918, of pneumonia, following influenza, contracted while on active service. Buried in Risley Churchyard.

He was awarded the Military cross "For conspicuous gallantry while commanding a company of Tanks in action. In spite of heavy artillery and machine-gun fire, he kept in close touch with the tanks, supervising and directing them with the utmost judgment and decision. His able handling enabled the infantry to reach their objective at the expense of very few casualties".