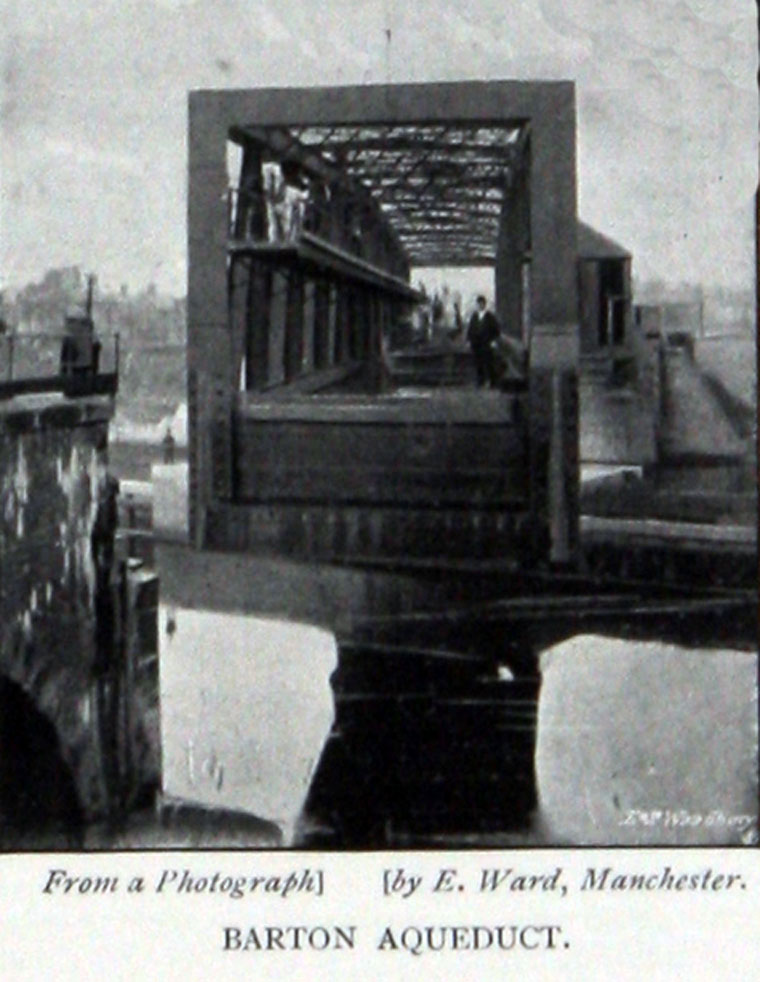 The aqueduct, which is the first and only swing aqueduct in the world, is a Grade II* listed building and is considered a major feat of Victorian civil engineering.

Designed by Edward Leader Williams and built by Andrew Handyside and Co of Derby, the swing bridge opened in 1894 and remains in use, although it is now rarely required to open it for Ship Canal traffic.

The Barton Swing Aqueduct was a direct replacement for the earlier Barton Aqueduct, a stone structure crossing the River Irwell. The original stone aqueduct was designed by James Brindley and dated from 1761; it was described as "one of the seven wonders of the canal age".

The construction of the Manchester Ship Canal in the 1890s necessitated the replacement of this structure, as the height of ships using the new ship canal would make them too large to pass under the original aqueduct. An alternative scheme involving the use of a double lock flight was not used, because of the need to conserve water in the Bridgewater canal above.

The new aqueduct was designed by Sir Edward Leader Williams, engineer to the Manchester Ship Canal Company, and built by Andrew Handyside of Derby. It became operational with the first barge crossing it on 21 August 1893. The aqueduct was commercially opened on 1 January 1894.

The aqueduct is a form of swing bridge. When closed, it allows canal traffic to pass along the Bridgewater Canal. When large vessels need to pass along the Ship Canal, the 1,450-tonne and 330-foot long iron trough is rotated 90 degrees on a pivot mounted on a small, purpose-built island in the Ship Canal. A gate at each end of the trough retains around 800 tonnes of water; further gates on each bank retain water in their adjacent stretches of canal. The aqueduct once had a suspended towpath along its length; however, this has been removed in recent years on grounds of safety.

The structure is located adjacent to, and upstream of, the Barton Road Swing Bridge. The two bridges are controlled from a brick control tower on an island in the centre of the Ship Canal. The island supports the pivot points for the rotating structures. When in the open positions, the aqueduct and road bridge line up along the length of the island, allowing ships to traverse along each side of the ship canal.