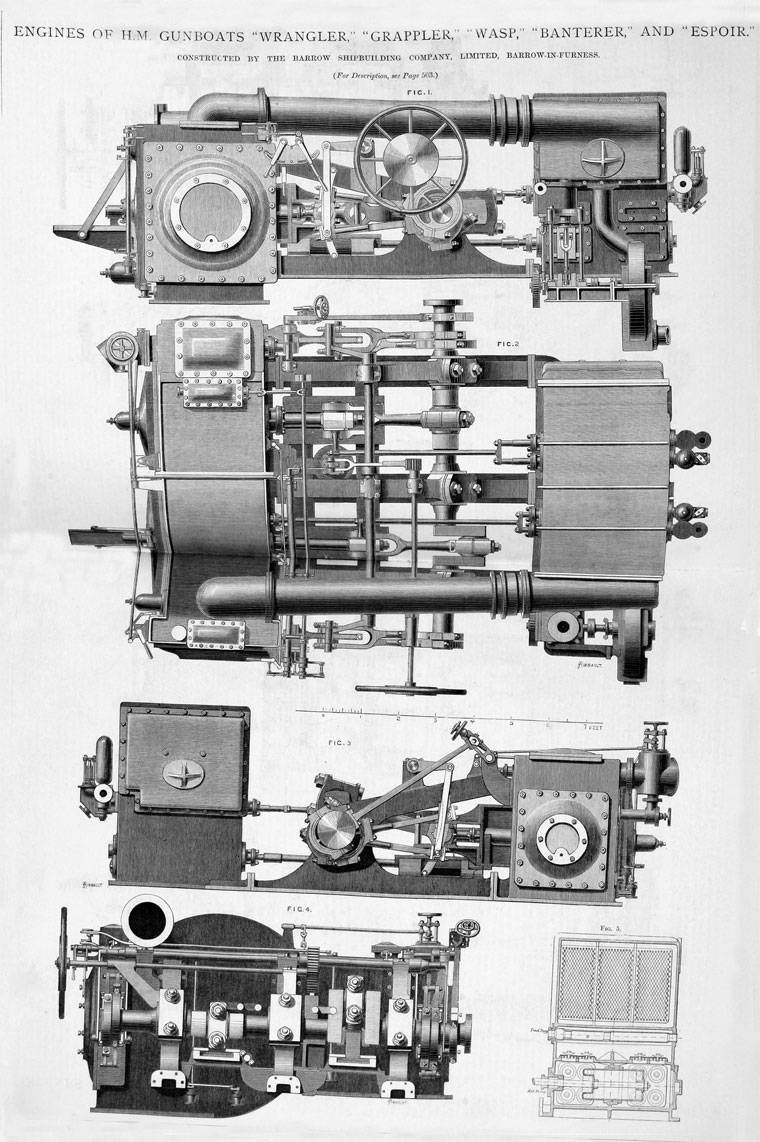 1871 The company was a conception of the Furness Railway Company and, backed by the considerable capital of that company's principal shareholders, it operated on a far grander scale than the small shipyards at Hindpool.

1873 Its first ship to be launched was the steam yacht Aries, which went down the slip on the 12th May 1873 (Yard No 12) for the founder Sir James Ramsden, launched by Lady Ramsden. She was followed by more than a hundred ships built in the next ten years, and these included large passenger liners and warships. D. and W. Henderson assisted the Duke of Devonshire’s Barrow Shipbuilding Co in the design of their first ships[1]

Its subsequent success, primarily in building submarines, has given it a continuing role as the dominant force in Barrow's economy. Naturally its history has formed the major part of Barrow's history of shipbuilding (for further details read the 1881 article from the New York Times describing the ship building yards at Barrow).

1881 the firm launched for the Inman Line the SS City of Rome, at the time, with the exception of the Great Eastern, the largest ship in the world.

1886 it launched the pioneer submarine Nordenfeldt (or Nordenfelt?).

1888 the business was taken over by the Naval Construction and Armaments Co, which began the manufacture of naval armaments. Over 100 vessels of all types have been constructed by this firm.

1881 A description of the yard

Everything necessary for an ocean steamer - sails, rigging, stores, &c.- carrying either freight or passengers, may be had of the Barrow Company.

You enter the main gateway, and the magnitude of the shops and forges amazes you. To the left are the offices of the company, and near them the joiners shop and the saw mill. To the right are the smiths shops, and the frame-benders' shed. Just beyond is the drawing office and model room.

The joiners' shop is a building 300 feet long and 60 feet wide. This building is supplied with every appliance known to ship-joiner work, and is said to be the most complete shop in every respect in the United Kingdom.

Beyond it is a still larger room, 450 feet by 60 feet, in which the immense masts and spars are made. Above these rooms are the cabinet-makers' shops, where every article of furniture required by an ocean steamer is manufactured.

The machine shed is 360 feet by 160 feet. The smiths' shop is 200 feet by 120 feet. This room contains 100 fires and seven steam hammers. The former are blown by an enormous Schiele fan.

All these shops and sheds occupy less than a third of the ground devoted to the ship-building department. At the back of the machine shop are the shipways, where vessels of an aggregate tonnage of nearly 40,000 tons are in a more or less advanced stage of construction.

Taking these in their order, there were recently to be seen five gun boats building for the Admiralty - the Grappler, Banterer, Wrangler, Espoir, and Wasp. Three of these were on the same slip, one behind the other. The slip is under cover, and was intended for the construction of yachts, for which the company is acquiring great reputation. The gun-boats will be all the same size, 460 tons, with engines of 360 horsepower.

Next to the gun-boats was the gigantic City of Rome, which will be the largest merchantman afloat after the Great Eastern. Next to the City of Rome is a slip devoted to a vessel of 4,100 tons, with engines of 3,800 horsepower, to be constructed for the Peninsular and Oriental Company, and the blocks for which are now being laid. When the company was at work on the keel of the Furnessia, visitors had an opportunity of seeing a new arrangement of hydraulic riveter designed by Mr. R. H. Tweddell, and constructed by Messrs.Fielding and Platt, of Gloucester, expressly for this class of work.

Nothing can give so good an impression of the size of these large ships out of the water as to compare the City of Rome or the Furnessia as they were seen on the stocks, with the Aries, a yacht of 300 tons, placed between them, and building for Sir James Ramsden, who recently lost his other yacht of the same name, also built at Barrow. Beyond the Furnessia are slips for two sister ships of 3,800 tons and 2,500 horsepower, ordered by the Société Générale de Transports Maritimes, of Marseilles. For these the keels are laid and the frames are being bent.

Beyond the French boats comes a 4,000 ton ship, to be specially constructed for the cattle trade, and her frames are now being erected. In addition to these the company have contracted for a second 4,000 ton ship for the Peninsular and Oriental Company, which will be laid down on the same slip as the Furnessia. This rapid summary of the vessels now on the stocks will give some idea of the amount of work in hand at this shipyard, and which, in several of the departments necessitates continuous labor night and day. The company are now putting up appliances for electric light, which will almost immediately be in operation, and will be of great assistance to the night gangs of frame-benders and keel-riveters, who for some time past have had to work the 24 hours round.

We now pass by the subway to the engineering department, which occupies an area of ground equal to that of the ship-yard proper. To the left, in an isolated building, is the coppersmiths' shop, the brass foundry, and the engineers' smithy: the foundry has seven ordinary pot furnaces, and one large reverberatory air furnace for castings of the heaviest class: the smithy is well fitted up and has one 2-ton steam hammer and three small ones.

On the opposite side of the ground are two buildings, the one to the left containing the iron foundry and boiler shop, and that to the right is occupied by the turning and erecting shop. The foundry is 250 feet by 150 feet, and is capable of turning out the largest castings required for the monster marine engines of the present day. Here was cast a part of the bed-plate of the City of Rome's engines, weighing 34 tons. In the boiler shop, which is the same size, the boilers of the Furnessia and those of the City of Rome were constructed. All these are 19 feet by 14 feet, with 1 ¼-inch plates, and for the shells and tube-plates we saw used a new and ingenious drilling machine which drills eight holes at once. In the boiler shop also a number of Mr. Tweddell's hydraulic riverters are in use.

In the space between the boiler shop and the engine shop is a furnace for heating and the rolls for vertically bending the large plates for the shells of marine boilers. In the furnace just mentioned, which has been designed by Mr. Rogers, the manager of the shops, the plates are heated while standing on their edge, and as the top of the furnace is level with the ground they are readily lifted out by a portable crane and deposited on the bed-plate adjoining the vertical rolls.

These rolls, which were made by Scriven and Co of Leeds, bend the plate in the usual way, the plate, however, during the whole process of bending resting on its edge on the bed-plate. The arrangement is a particularly handy one where large plates have to be dealt with.

In this vacant space is also situated the water tower for the accumulator for the 100-ton crane, constructed by Sir William Armstrong at the dock-side, for placing on board and fixing the machinery for the new ships. This crane has the greatest range of any in the world, and only one other has equal power.

The engine shop, although 420 feet long by 150 feet wide, is scarcely large enough for the press of work concentrated there. A noticeable and excellent feature is the extent to which milling tools are employed on heavy work. Among the recent additions is a gigantic double standard slotting machine by Buckton, of Leeds, possessing many excellent features, and adapted for the heaviest work. Another good tool is a very large screwing machine on Burrow's system, made by Smith, Beacock and Tannett, this machine doing excellent work.