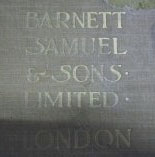 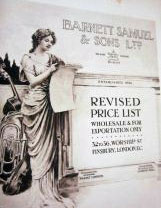 1819 Barnett Samuel was born in Russia and later was naturalised as a British citizen.

The family and firm were in Sheffield; they manufactured tortoise-shell doorknobs, knife handles and combs. Barnett, his son Nelson (who joined the firm around 1870) and a nephew Max Samuel (of Prussia) were dealing in musical instruments. Barnett's wife, Caroline, was Henry Solomon's sister. They also had three daughters - Rosa, Bertha and Minnie - who played music together.

They all moved to London as the music business started to take off and took over the warehouses at 31 Houndsditch and 27a Duke Street. The firm became a huge musical concern selling every kind of instrument including harmoniums and zithers.

1861 Henry Solomon sold the musical instrument side of his business to Barnett Samuel, who had married his sister Caroline.

1869 Nelson Samuel (Barnett's third son) entered the business and eventually took a great part in the prosperity of the firm.

1872 Barnett's eldest son was taken into partnership and the title of the firm became Barnett Samuel and Son.

1878 The firm moved to 32 Worship Street, and Nelson Samuel was given a partnership. He proved to be a force behind even greater expansion of the firm's activities. By then they were dealing in every type of musical instrument and musical merchandise - including banjos and zither-banjos made for them by Birmingham and London factories. In 1878 the firm opened the first English harmonium factory.

1899 There are no records of when they actually started to make banjos but in 1899 there is a record of the company importing "hundreds of banjo vellums from Germany for use in their factory." It would suggest they were already making banjos by this time.

1901 The company was incorporated as Barnett Samuel and Sons Ltd. [1] By this time the firm was one of the largest musical instrument wholesalers in the country and, in addition, had established their own piano factory in North London.

1904 Two of Nelson's sons, Frank and Edgar, and two of their cousins, entered the family business.

By 1911 the subsidiary company John Grey and Sons had been formed and used the name as a trademark on its instruments. Earlier instruments just had Grey and Sons Ltd as the trademark. The company made some of their own instruments and had many made by the usual 'makers to the trade' of the time.

By 1914, the 4 members of the younger generation were in charge; the business was the largest record wholesalers and dealerships in London

1914 Barnett Samuel and Sons began manufacturing a portable gramophone called the Dulcephone, which they patented as the first portable gramophone; they sold it under the trade name Decca. This major breakthrough in the technology of recorded sound gave good-quality reproduction and the convenience of portability: the Decca could be carried around like a briefcase. Many were taken overseas by soldiers in WWI[3]

1914 Manufacturers and importers of pianofortes and all kinds of musical instruments, gramophones and records. Specialities: the Pistonola player piano, Chicago cottage organs, Odeon, Jumbo and Fonotipia records and the Dulcephone, an improved type of gramophone. Employees 200[4]

1927 The sales of these portable gramophones was enormous and dwarfed the sales of all other goods made by the company, although the manufacture of banjos was thriving because of the dance-band boom.

By 1928 Barnett Samuel's gramophone interests had been renamed the Decca Gramophone Co which was floated in 1928 as a public company [1]. The musical instrument part of the company was contained in just 8 shares of John Grey and Sons.

1932 The shares in John Grey were bought by Rose, Morris and Co who made banjos up to and after the second world war.