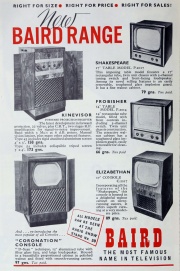 1927 The Baird Television Development Company was established to acquire the rights to John Logie Baird's television system from Television Ltd of Motorgraph House. Had found a suitable factory at Long Acre, London[1].

1928 Baird made the first transatlantic television transmission, from London to Hartsdale, New York; the BBC decided that the system was not ready for experimental transmission from its transmitters.

1928 Baird International Television Ltd was incorporated as a public company that would have a controlling interest in the Development Company[2] including a range of other inventions including Noctovision (infra-red vision), Phonovision on gramophone records, facsimile telegraphy.

1929 The BBC agreed to start experimental broadcasts outside normal broadcast hours[3]. The BBC transmitters were used to broadcast television programmes using the 30-line Baird system from 1929 to 1932. Plessey Co manufactured the first production televisions for Baird.

1930 The International Company would absorb the Development Company; a new name would be given to the company: Baird Television Ltd[4].

From 1932 to 1935, the BBC also produced the programmes in their own studio at 16 Portland Place.

1936 the BBC began transmitting Baird 240-line transmissions alternated with the Marconi-EMI Television Co's electronic scanning system which had recently been improved to 405 lines. The Baird system at the time involved an intermediate film process, where footage was shot on cine film which was rapidly developed and scanned.

The company had access to Philo T. Farnsworth's electronic "Image Dissector" camera via a patent-sharing agreement. However, the Image Dissector camera was found to be lacking in light sensitivity, requiring excessive levels of illumination. Baird used the Farnsworth tubes instead to scan cine film, in which capacity they proved serviceable through prone to dropouts and other problems. Farnsworth himself came to London to Baird's Crystal Palace laboratories in 1936 but was unable to fully solve the problem; the fire that burned the Palace to the ground later that year further hampered the Baird company's ability to compete.

1938 Cooperation with Gaumont-British to equip large theatres and cinemas[6].

1939 9th OGM. Announced that from June they will undertake all manufacturing themselves and cease working with Bush Radio. J. L. Baird was then President of the company. [7] 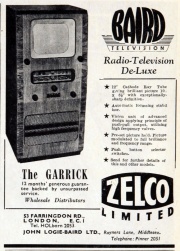 1948 Scophony Ltd acquired John Logie Baird Ltd and its associate company W. Andrew Bryce and Co of Lancelot Rd, Wembley; a new factory was opened at Wells and expansion of television production at the Wembley factory[9].

1959 Sold its interest in Ambassador Radio and Television and Telecast Rentals[17].