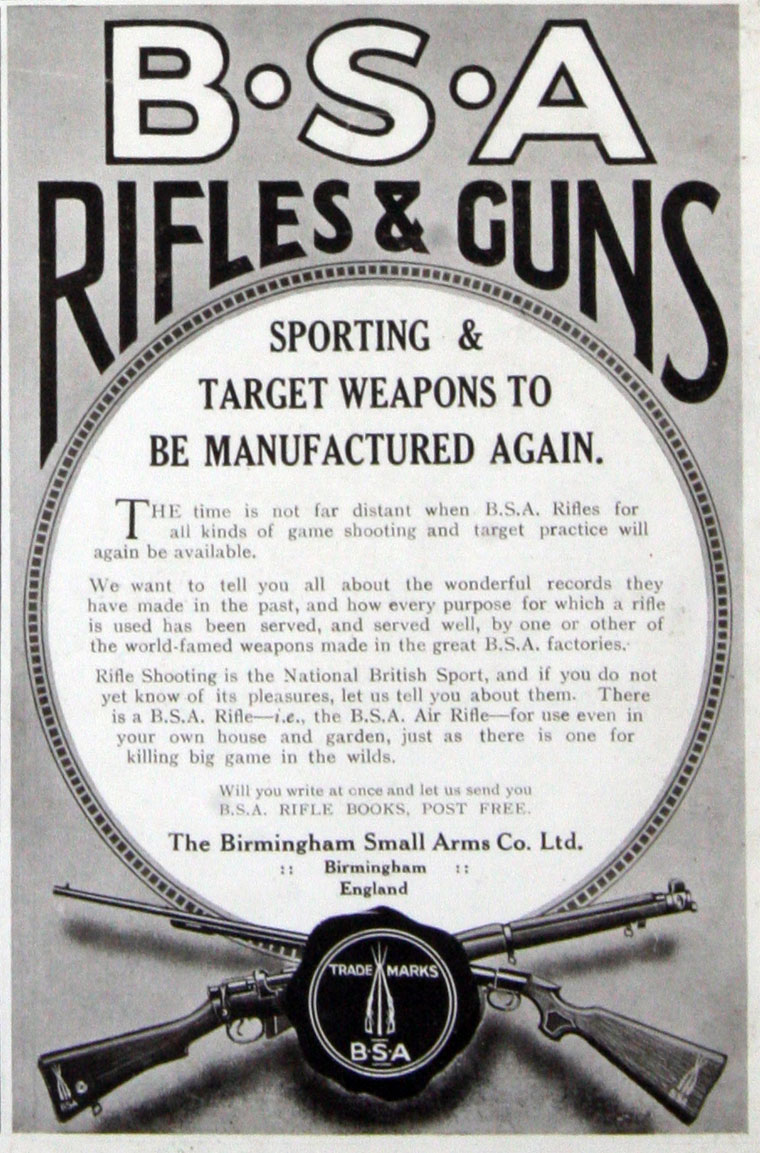 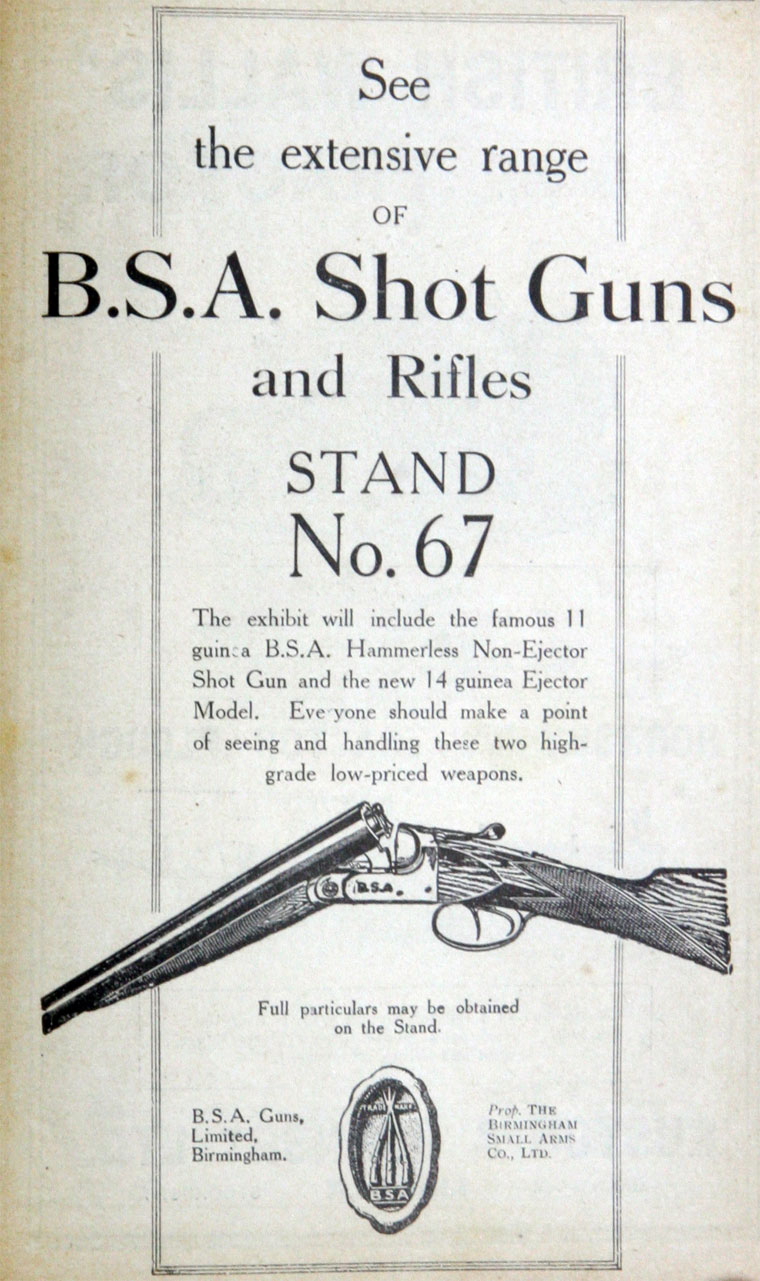 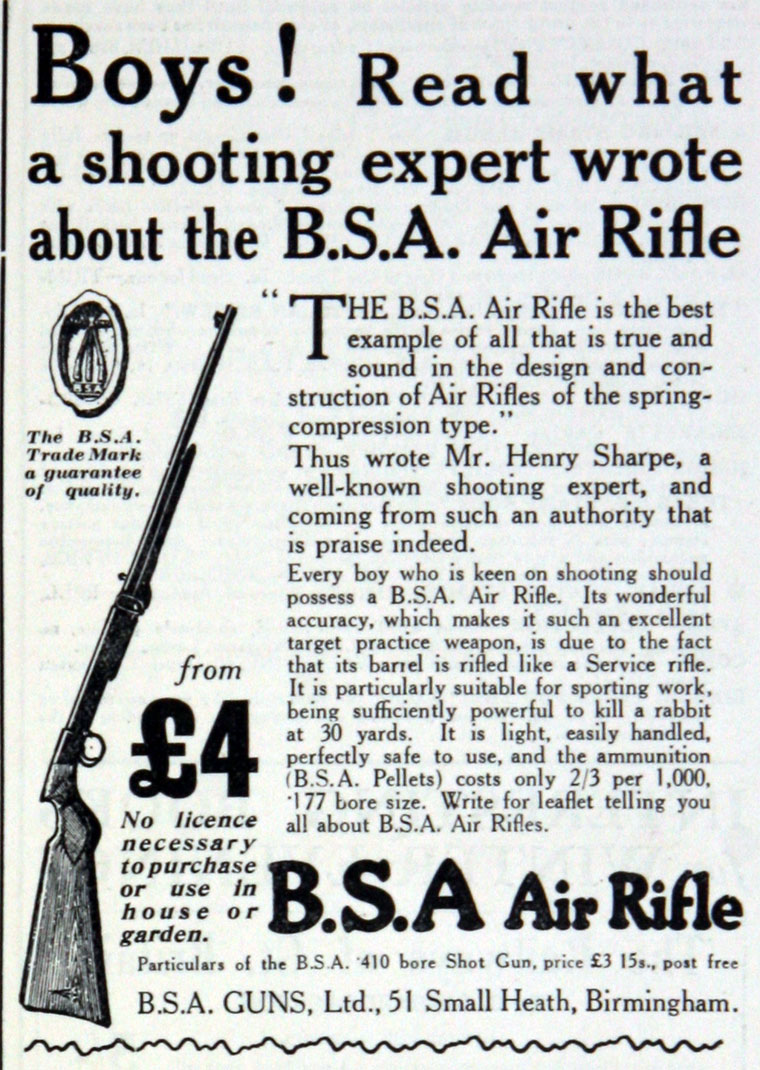 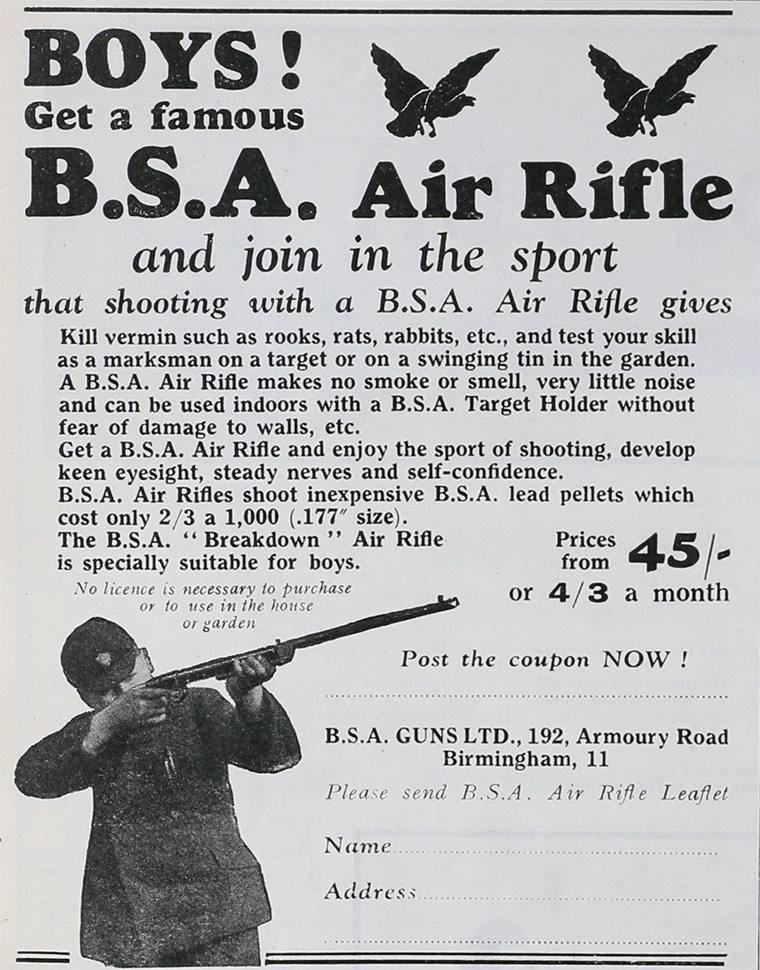 Note: this is a sub-section of BSA

1861 Company formed[1]. The object of forming the company was to begin making small arms by machinery to meet the growing competition from the mechanised government factory at Enfield. A 25 acre site was bought at Small Heath, (then just outside the Birmingham boundary), and two years later the factory was in operation.

By 1866 the company could record a profit of £7,000 and in a few short years it became the largest private arms manufacturer in Europe. One order from the Prussian government,then at war with Austria, was not for rifles but for cartridge cases - 40 million of them. Rather than turn it down the directors acquired a munitions factory and changed the title to the Birmingham Small Arms and Metal Company Limited.

1870s Towards the end of the decade, the Small Heath factory was completely closed for twelve months and the future looked impossibly dark. A small contract enabled the works to be opened again.

1880 Edward Carl Fredrich Otto had designed a strange type of bicycle with two large wheels on either side of the rider. He demonstrated it by riding on the boardroom table under the noses of the astonished directors - and so impressed them that they put the device into production immediately.

This first venture into the transport field was followed by more conventional bicycles and tricycles, but a sudden increase in the demand for rifles at the end of the 80s caused the directors to drop cycle work.

1897 The company reverted to its original title. The early prosperity was short-lived. As wars ceased, the demand for weapons fell, and the private arms trade was the first to suffer.

1906 Took over the Royal Small Arms Factory (Birmingham) at Sparkbrook

WWI Made the Lewis gun.

WWI In the First World War the BSA factories were turned over almost entirely to munitions work. Huge quantities of service rifles, machine guns, military motorcycles, and the world's first folding bicycles were supplied to the troops.

1930s Right through the 30s, BSA rifle production had been confined to comparatively small quantities of sporting weapons. The company's considerable amount of arms plant had been maintained out of a sense of duty. It would take a book to describe fully the activities of the BSA organisation during the last war.

Apart from the company's own factories in Birmingham, Coventry, Redditch, Sheffield and Durham, many dispersal units and shadow factories were used for the purpose of arms production. The Small Heath administration alone (BSA Cycles and BSA Guns) controlled 67 factories, employing 28,000 people and containing 25,000 machine tools. This organisation produced more than half the small arms supplied to Britain's forces during the war.

WWII BSA's war production included nearly half a million of the Browning machine guns with which RAF Spitfires and Hurricanes won the Battle of Britain; one and a quarter million service rifles (Lee Enfield .303); 400,000 Sten guns; machine guns (568,100 .303 Browning and 60,000 BESA 7.92), cannon, anti-tank rifles, and gun carriages, ten million shell fuses,over three and a half million magazines, and 750,000 anti-aircraft rockets.

Several Group factories were heavily bombed and at Small Heath more than 50 employees lost their lives. At this works alone, more machine tools were destroyed or damaged by enemy action than were lost in the whole of the Coventry blitz.

As an emblem of their craft they adopted the sign of three crossed rifles, which has since become world-known as the Piled Arms trademark.

Although the company no longer makes military weapons, BSA Guns Ltd maintains a steady flow of air rifles, hunting rifles and sporting guns to most parts of the world, exporting its manufactured products.

'We have not yet visited the giant whose strong steam-supplied lungs and iron thews work every machine in the vast building. This gentleman partakes of the nature of a kind of Behemoth Siamese twins. He is neither more nor less than a pair of horizontal condensing engines, of a combined 60-horse power (but capable of indicating 200), with a 26-inch cylinder and a three-feet stroke. The main fly-wheel, 15 feet 7 inches in diameter, gives power to the shafting through the medium of two 13 inch double leather bands. No gearing therefore is used; and seeing that several processes in the manufacture are of so delicate a nature that the slightest irregularity of movement would create much additional work if not an effect more serious, the improvement in this respect is a matter of vast importance. The engines are fixed upon a bed of brickwork, 12 feet deep, and the bolts that hold them down are screwed through a solid plate of iron 9 feet down in the bricklwork. Steam is supplied both to drive the engine and manufactory by two tubular boilers measuring 27 feet by 7 feet.

'The engines, boilers, and mill gearing are supplied by Messrs. Hick and Sons, of Bolton; and the American machinery in use throughout the manufactory has been supplied by the Ames Manufacturing Company of Chicopee, the same company who supplied similar machinery to the authorities at Enfield and the London Armoury. The remaining machines are supplied by Messrs. Greenwood and Batley, of Leeds, who have also had to do with Enfield and London. The tools and fixtures, in almost endless variety, however, have been provided by the Ames Company. The manager is Mr. B. M'Kay, formerly with Mr. Whitworth; and the chief engineer, Mr. C. M. M'Farland, a member of the Ames Company, builder of the Enfield machinery, and for some time chief engineer of the London Armoury Company's Works. It is calculated that, as at present constructed, the factory will turn out a thousand stand of arms weekly, and that when complete it will turn out two thousand. The Enfield factory is supposed to send out 2,000 weekly, and the London Armoury Company 900 weekly. The cost of the Small Heath building it is supposed will reach £20,000. ; of the cost of the machinery we can form no estimate at present.'[6]