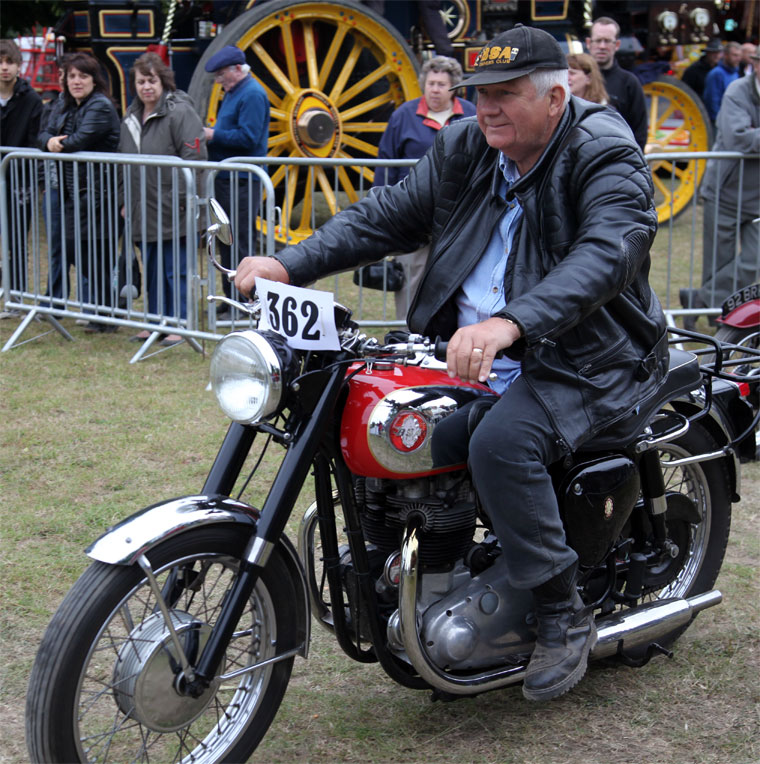 Note: This is a sub-section of BSA: Motorcycles.

The BSA A10 is a British motorcycle that led the rise of the "parallel twin" engine layout, which was to dominate British design throughout the 1950s and 60s.

Many parts, including the duplex frame and wheels, were carried over from the existing 500cc BSA: A7, saving time in design and production. This also had the advantage of greater reliability, as it minimised the risk of any new technical problems. The earliest A10s incorporated two useful features in particular which were also derived from the A7, but were nonetheless relatively short lived. These were a hinged rear mudguard, designed to ease rear wheel removal, and a semi-unit engine and gearbox arrangement. The semi-unit power train enabled the primary chain to be adjusted via a slipper within the primary chaincase.

The Golden Flash was available in black and chrome, but it was the all-over gold paint scheme that gave it its name and made it such a popular escape from post war austerity.

Launched in October 1949, the A10 Golden Flash was a new design that was developed into a best selling range of motorcycles right through to the 1962 Rocket Gold Star. The original A10 Golden Flash was produced with a rigid frame for sidecar use and plunger suspension for overseas export. These exports were so important to post war British industry that the bulk of production went to the USA, meaning long delivery times for UK customers.[3]

The early Golden Flash was a fast machine for its time, achieving over 100 miles per hour in tests in 1950, and covering a standing quarter mile in under 16 seconds.

Early Golden Flash A10s had frames with either no rear suspension, or "plungers", and had a semi-unit engine and gearbox, with the gearbox bolted to the rear of the engine. However, BSA were concerned about a tendency for wear in the rear, plunger suspension, leading to uncertain handling, and it was replaced in 1954 with a modern swinging arm. The hinged mudguard was deleted, as no longer necessary, and, though the abandonment of the semi-unit power train made for a more involved procedure for adjustment of the primary chain, it offered benefits in the areas of the clutch and gearbox internals.

The Golden Flash A10 was developed into the Super Flash and Road Rocket, before becoming the 105 miles per hour BSA Super Rocket in 1958. This was nearly the end of the line for A10s, but in 1962 BSA produced the BSA Rocket Gold Star, which fitted a tuned A10 Super Rocket engine into the well proven BSA Gold Star single frame. The result was a good handling fast bike that was a true classic. Current demand for the Rocket Gold Star, or "RGS", is such that non-RGS A10s are sometimes sold as originals, having been modified using suitable alternative parts.