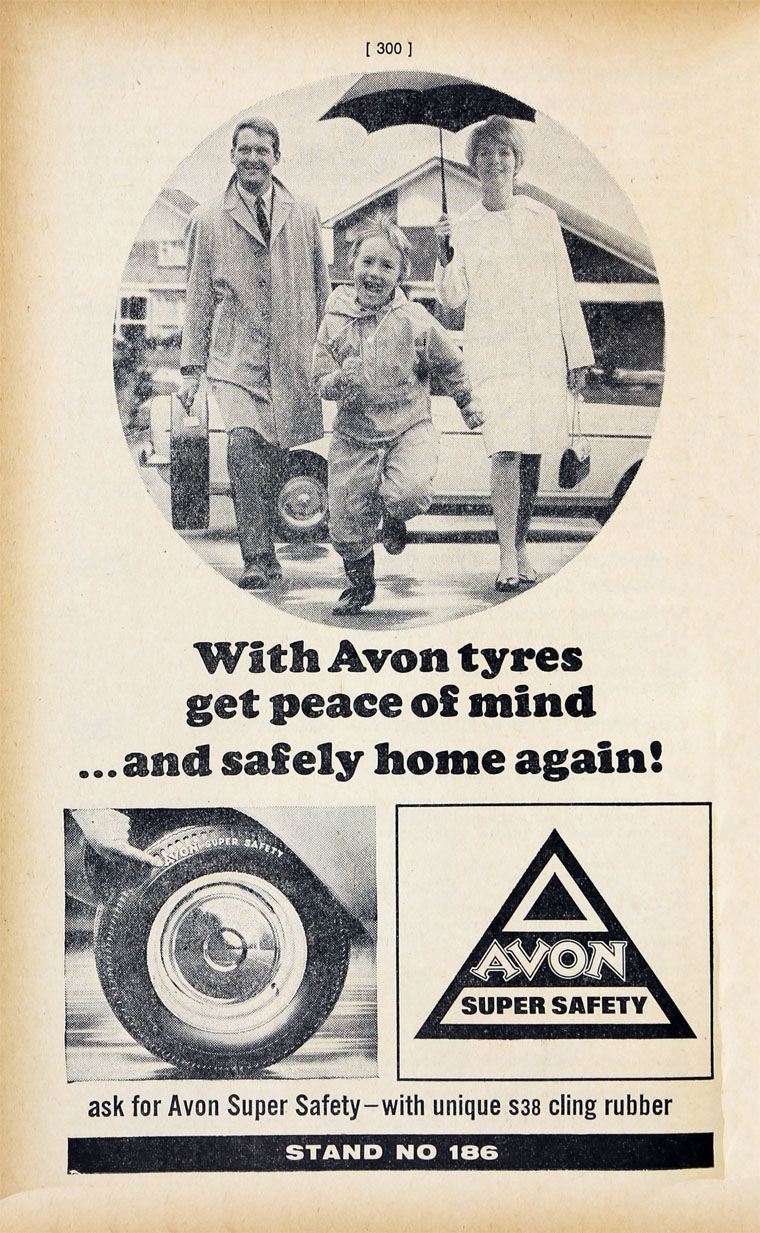 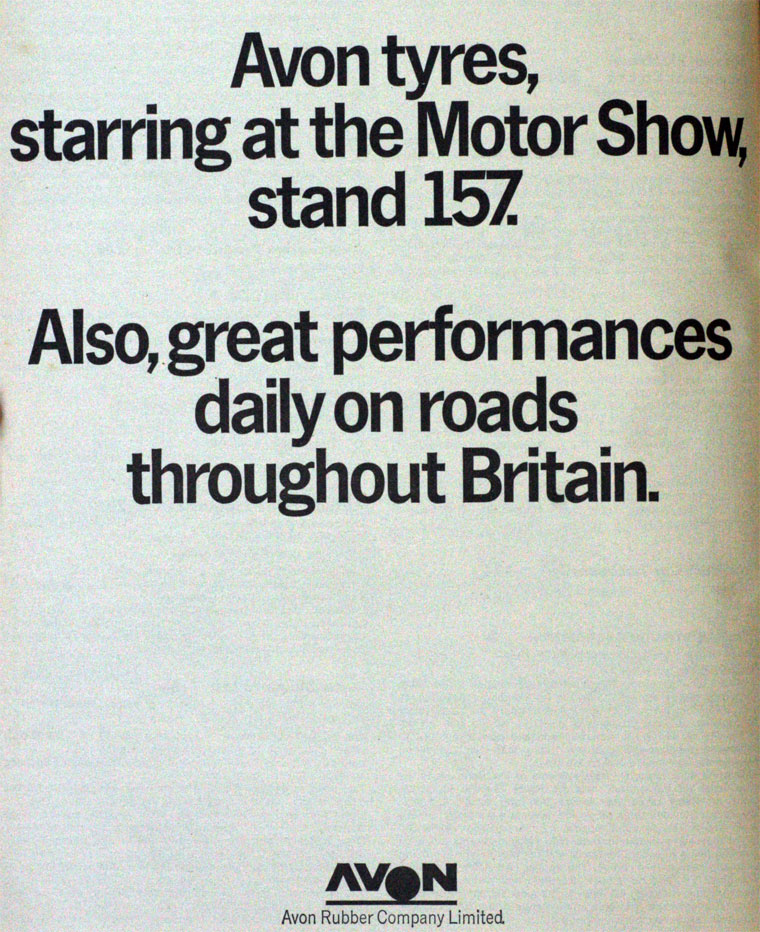 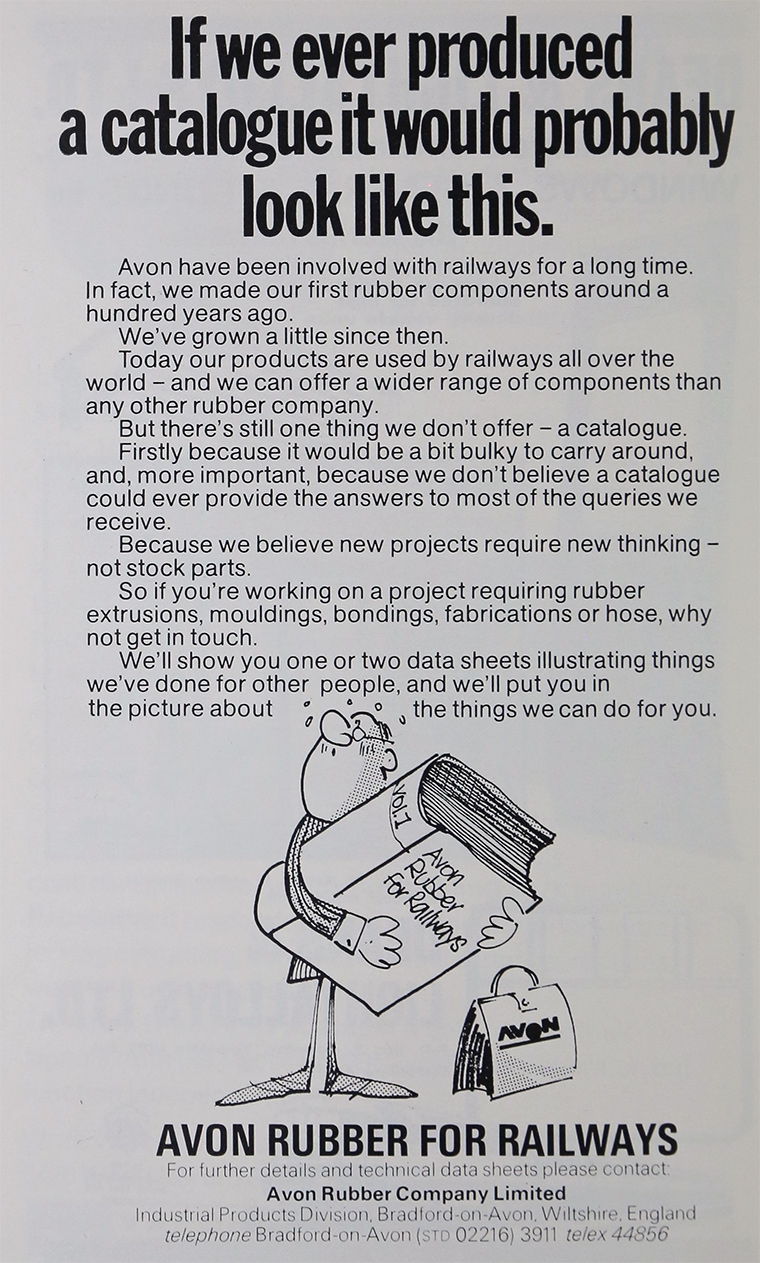 1963 Avon India Rubber Co acquired the Normeir Tyre Co; as a result Avon became involved with tyre distribution for the first time. This chain, strengthened by future acquisitions, was to form the basis of the Motorway Tyres and Accessories Company. The word "India" was dropped from the title which was shortened to Avon Rubber Co.

1964 Further growth was achieved with the acquisition of two companies - David Moseley and Sons of Manchester, manufacturers of industrial rubber and plastics products and their subsidiary, Capon Heaton and Co, makers of rubber and plastics components and a highly specialised range of medical products. A new factory for the manufacture of inflatable craft was also set up at Dafen, near Llanelli, where production of these items transferred from the Abbey Mills factory at Bradford on Avon.

1966 The Great Fire at Melksham destroyed the Finished Goods store, in which it raged for many hours and threatened to engulf the whole factory. The company lost 25 per cent of all its new stocks, plus all moulded rubber products awaiting despatch. The biggest fire in Wiltshire's history cost more than £1 million. A further move in the distributive side was made when Tyrebatt, a West of England tyre distributive chain, was purchased and a year later the tyre and accessory distributive interests of Kerrys were bought. Avon also began an involvement in the manufacture of rubber for hovercraft skirting.

1968 At Bridgend, footwear presses were removed to make way for new tyre remoulding presses. Tyre remoulding in Bradford on Avon was beginning to outgrow production capacity, manufacturing was transferred to the footwear factory in Bridgend which was now struggling.

1969 Avon Reifen began operations in Dusseldorf, Germany. This marketing arm was set up to promote sales of Avon tyres in the Federal Republic of Germany.

1970 The tyre company also continued to expand in Britain where Howcroft Tyre and Battery Co was purchased. This tyre distributor was integrated into the Motorway Tyres distribution chain, and Avon won an order from Volkswagen to supply tyres to the famous Volkswagen Beetle.

Early 1970s the decision was made to expand Avon Medicals into the highly demanding business of designing and producing disposable blood transfusion sets and also dialysis equipment for patients suffering from kidney disease.

1972 A 33 per cent shareholding was acquired in another specialist company, Lippiatt, Hobbs and Co. Based in Westbury, Wiltshire, the business had been formed to develop and market new products for the repair and maintenance of gas distribution networks. The company was re-named Avon Lippiatt Hobbs.

Avon Industrial Polymers was actively reinforcing its reputation. Following the granting of a licence to develop and manufacture hovercraft skirt components, work had been undertaken with leading hovercraft manufacturers.

The tyre division was expanding the scope of its distribution network with the opening of new depots at Birmingham, Glasgow, Reading, Leeds and Newcastle making a total of over 140 branches in the UK and Ireland.

1973 A new division was formed at Bridgend, grouping together products such as remould tyres and materials, wheel and undergear equipment, and the marketing of footwear and industrial tyres. Avon Medicals began to develop the export side of the business by opening a marketing company in Dietzenbach, West Germany.

At Melksham, Avon Ames was formed as the result of a joint venture between Avon Industrial Polymers and the Ames Rubber Corporation of the US. Avon Ames designed, developed and manufactured reprographic roller coverings for the high speed copying machines which were quickly becoming an office essential.

The decision by the oil-producing countries to impose massive price increases caused worldwide economic and social crises. Energy costs soared, together with those of oil related chemicals and rubbers, transport and other services. A period of exceptional inflation and economic instability was the inevitable consequence. Every sector of industry suffered and there were particular problems for the tyre manufacturers. With fewer new vehicles being sold and radials giving a far greater mileage, sales of new tyres plummeted. A serious worldwide over-capacity of tyre production resulted and, as competition for customers increased, Avon's year-end accounts for 1975 reported a loss of over half a million pounds.

1977 British Gas awarded a licence to Avon Lippiatt Hobbs to promote the worldwide sales of products and systems relating to the maintenance and sealing of gas distribution pipelines.

1978 Avon acquired the remaining 67% of Lippiatt Hobbs that it did not already own[1].

In Britain, the progressive decline of traditional industries which had been evident for some years, was accelerated with traumatic social and financial consequences. Extreme competition for the reduced volume of business caused a sharp decline in profits in 1980 and, together with the cost of reorganisation, led to losses being made in the following two years. For Avon, an urgent programme of product rationalisation and costly reorganisation formed the basis of the Group's survival. Avon became a public limited company in December 1981.

The first grim effects of recession began with the closures of the Moseley factory in Manchester and of the Capon Heaton factory in Birmingham. The Group sold Avon Medicals. Avon Industrial Polymers was reorganised to provide a single management structure and a reduction in the size of its workforce. After only two years, the second Avon Inflatables manufacturing unit at Henley was closed and all production concentrated at the Dafen site. The Bridgend factory was closed with a loss of 260 jobs, and the manufacture of remould materials transferred to Melksham. The axle business was sold and a management buyout agreed for Avonride suspension equipment. Footwear production and marketing had already ceased. Throughout 1982 there were many redundancies.

The company survived and a range of racing tyres developed by Avon Tyres quickly won successes in numerous championships and attracted orders from many parts of the world. There then followed a programme of expansion and amalgamation with many companies throughout the world, particularly in America.

Today, well over a hundred years after its formation, Avon Rubber is an international polymer engineering group with modern, well-invested global facilities. It is a significant supplier to the world's automotive, engineering, dairy and defence markets with a blue chip customer base served by approximately 4,500 employees.