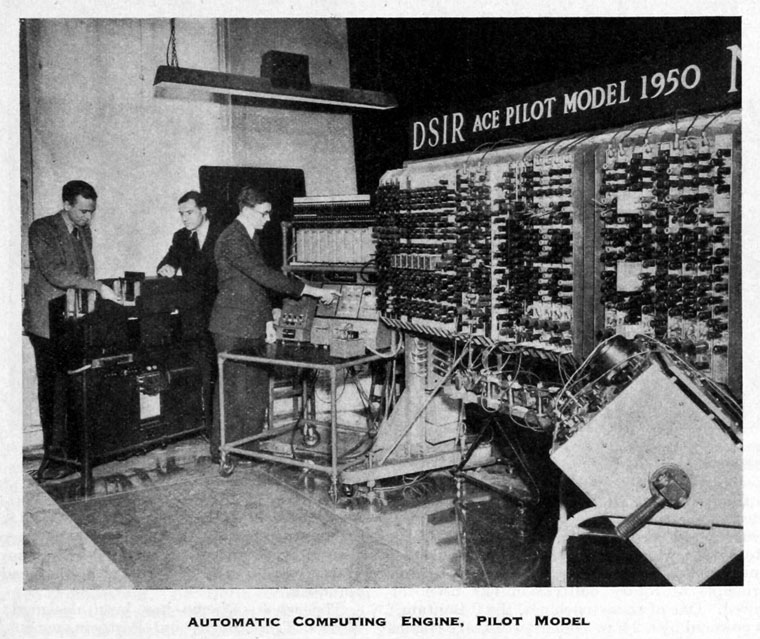 1945 The Mathematics Division of the National Physical Laboratory (NPL) was formed as a centre for mechanical computation. Its primary task was to understand and develop numerical methods and then hopefully with computers (only a distant prospect) carry these out more effectively. J.R. Womersley became Superintendent. He recruited Alan Turing. He also coined the name Automatic Computing Engine, in deference to Charles Babbage who had used the term "engine"[1].

1945 Alan Turing presented a report to the Executive Committee of the NPL proposing the Automatic Computing Engine (ACE) project, which the committee approved. Turing foresaw its use for numerical calculations of interest to scientists and engineers; also for clerical work, though he thought this would require excessive amounts of input and output; and also for logical and combinatorial problems and number theory, as well as weather forecasting[2].

Turing was part of the group formed for the design, construction and use of the machine. During his time at NPL, Turing planned ACE and carried out a great deal of pioneering work in the design of subroutines.

1946 A group in the Mathematics Division continued writing programs to try to improve their efficiency whilst hardware was being developed by the Post Office Research Station at Dollis Hill.

After some time, an Electronics Section was formed at NPL and the Post Office contract was closed. The pilot model ACE had only 800 valves

1949 NPL chose English Electric Co as industrial partner in computer development, following the ACE project; industry was seen to be needed to improve reliability and performance of the machine. The new computer was called the Digital Electronic Universal Computing Engine (DEUCE) [3].

1951 A multiplier was fitted together a new control system which saved some of the logic. That completed its development, apart from the magnetic drum which came in 1954 and was very important.

1952 ACE was operated as a service from 1952 onwards and was moved to a new location, selling its services commercially to the aircraft industry among others.