Grace's Guide is the leading source of historical information on industry and manufacturing in Britain. This web publication contains 149,525 pages of information and 235,436 images on early companies, their products and the people who designed and built them. 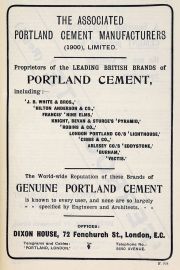 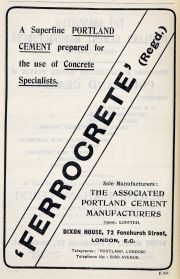 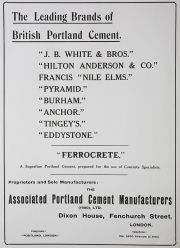 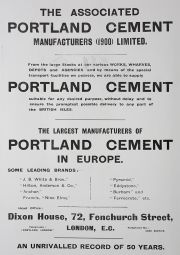 1900 The company was registered on 10 July as Associated Portland Cement Manufacturers (1900), to take over the undertakings of several firms and companies engaged in the manufacture of Portland cement. [1]. 24 cement companies, owning a total of 35 cement plants, were amalgamated; all but two of which were located on the Thames and Medway estuaries near London. The companies were: [2]

On the River Thames

On the River Medway

Outside Thames and Medway District

1911 Manufacturer of Cement for the Railways.[3]

1920 Formation of a joint marketing company with British Portland Cement Manufacturers, Martin Earle and Co and Wouldham Cement Co, which would be called the Cement Marketing Company Ltd[4]

1960s The Crown works, then called the Crown and Quarry Works, was the last to close.

1978 The name of the UK company was officially changed from APCM Ltd to Blue Circle Industries PLC. The Blue Circle name is said to have come from when a director drew a circle in blue pen around the name of the merged companies

2001 Blue Circle Industries Plc was taken over by a French company, Lafarge, the world's leading producer of cement.

The company was founded in 1900 as Associated Portland Cement Manufacturers Ltd by the amalgamation of 24 cement companies, owning a total of 35 cement plants, all but two of which were located on Thames and Medway estuaries near London. These included the two cement plants (Robin's and Swanscombe) that first manufactured Portland cement in the 1840s.

The initial prospectus of the merger was to unify the entire British cement industry, eliminating competition, and excluding imports. The attempt to achieve this failed, because a number of small companies, many of them outside the London area, refused to discuss the proposition, four major players in the initial discussions dropped out, and a further three committed companies dropped out at the last minute.

The company held 70% of the British cement manufacturing capacity (1.25 million tons per annum out of a total 1.8 million tons). The company had acquired, at considerable cost, patents related to the use of rotary kilns.

The cement kiln patents proved valueless, since rotary kilns were already in place or being installed by their competitors. In the ensuing decade, the majority of the rotary kilns installed in Britain were installed by the competition, including several newly-launched companies. Because of the disastrous circumstances of the company launch, it was short of cash and could ill afford investment.

By 1910 its capacity remained 1.25 million tons per annum, although competing capacity had risen to 1.8 million tons. Although a few favoured plants had been uprated, the majority of the original 35 had been shut down.

In 1911, a second attempt was made to unify the industry. 33 companies, including all the original drop-outs, were merged to form the British Portland Cement Manufacturers. This time, a substantial number of plants outside the London area were involved. Again, a small but significant number of companies refused to join.

The combined APCM and BPCM companies now controlled 80% of national capacity, in 58 plants. This pattern became a template for subsequent history: declining capacity share was periodically boosted by acquisition of competitors, and the company continued to maintain 60-70% of British capacity until its demise