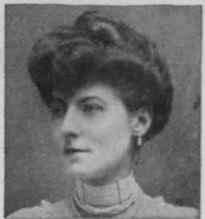 It was quite by accident that Mrs. Assheton Harbord became one of the most daring lady aeronauts of to-day. In 1906 she went to see off some friends who were making a balloon ascent, and at the last moment they suggested that she should go with them. She went, and when she returned to earth once more it was an enthusiastic aeronaut.

Since then has made nearly two hundred voyages, owns her own balloon, and has been entertained by the members of the Aero Club in token of their appreciation of her pluck and skill.

She has made four voyages across the Channel, and has had a number of thrilling escapes, notably when the car of the balloon, which was her own, on reaching the Continent, bumped on the ground, owing to a storm, and threw out its unlucky occupant "I can claim, therefore," humorously remarks Mrs. Harbord, "to be the only woman who has landed on the Continent on her head."

In 1905 Mrs. Harbord married the Hon. Assheton Harbord, and previous to her marriage with him, was the widow of Mr. Arthur Blackwood, of Melbourne. In appearance Mrs. Assheton Harbord is pretty and petite, and possesses a charming taste in dress.

'The Aero Club has awarded the "Mortimer Singer Plate" to the Hon. Mrs. Assheton Harbqrd, who made a journey of 78 miles in a balloon on September 11th last. The Plate was presented by Mr. A. Mortimer Singer for the longest balloon trip during the months of July, August and September. [1]