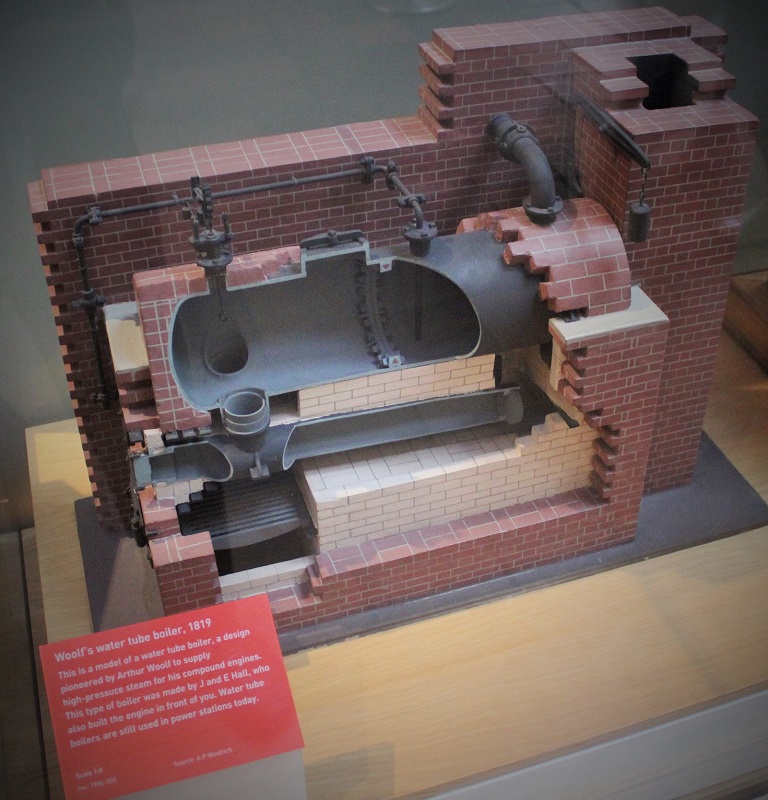 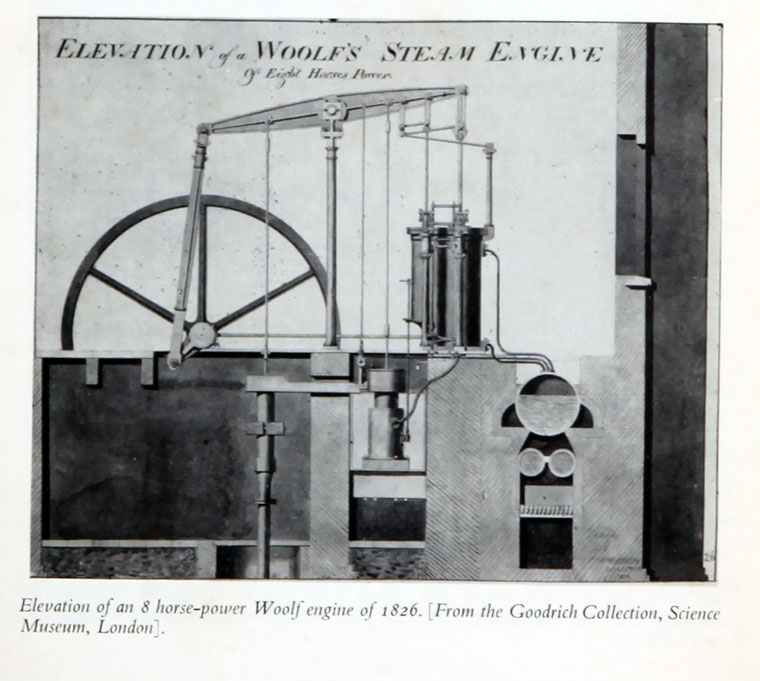 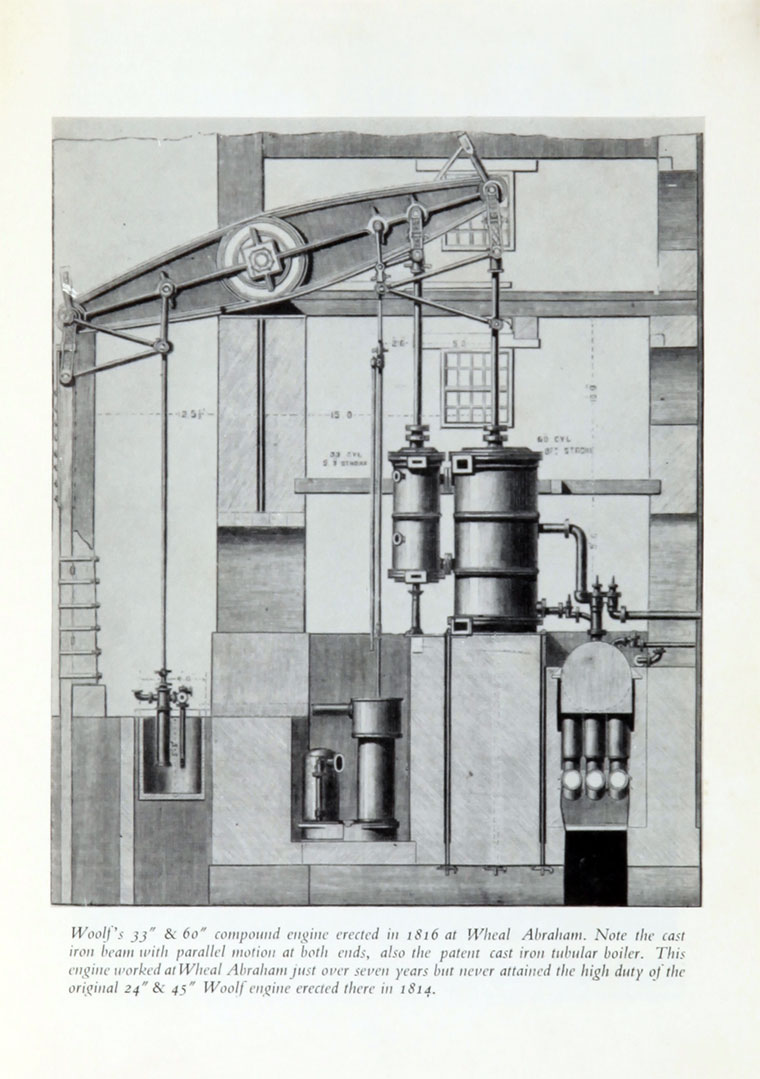 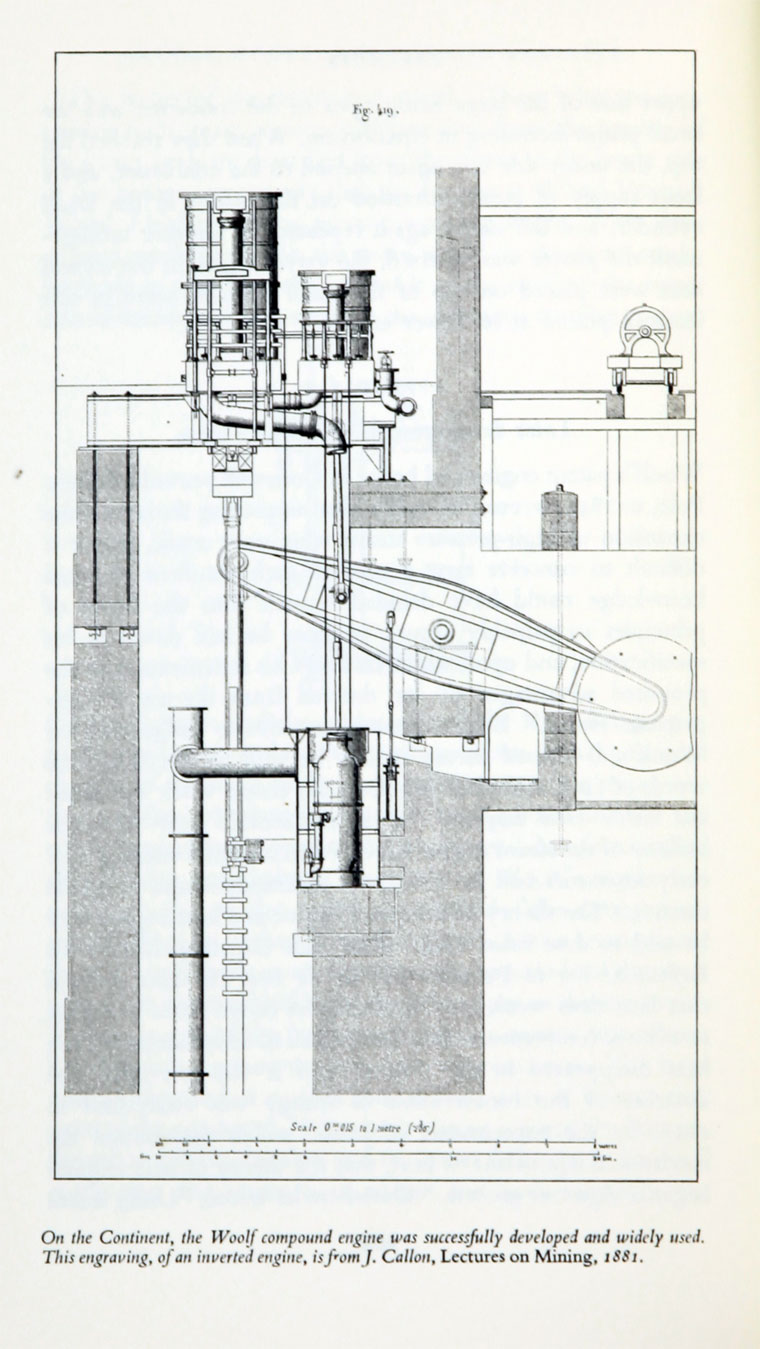 1966. An inverted engine by Woolf on the continent. 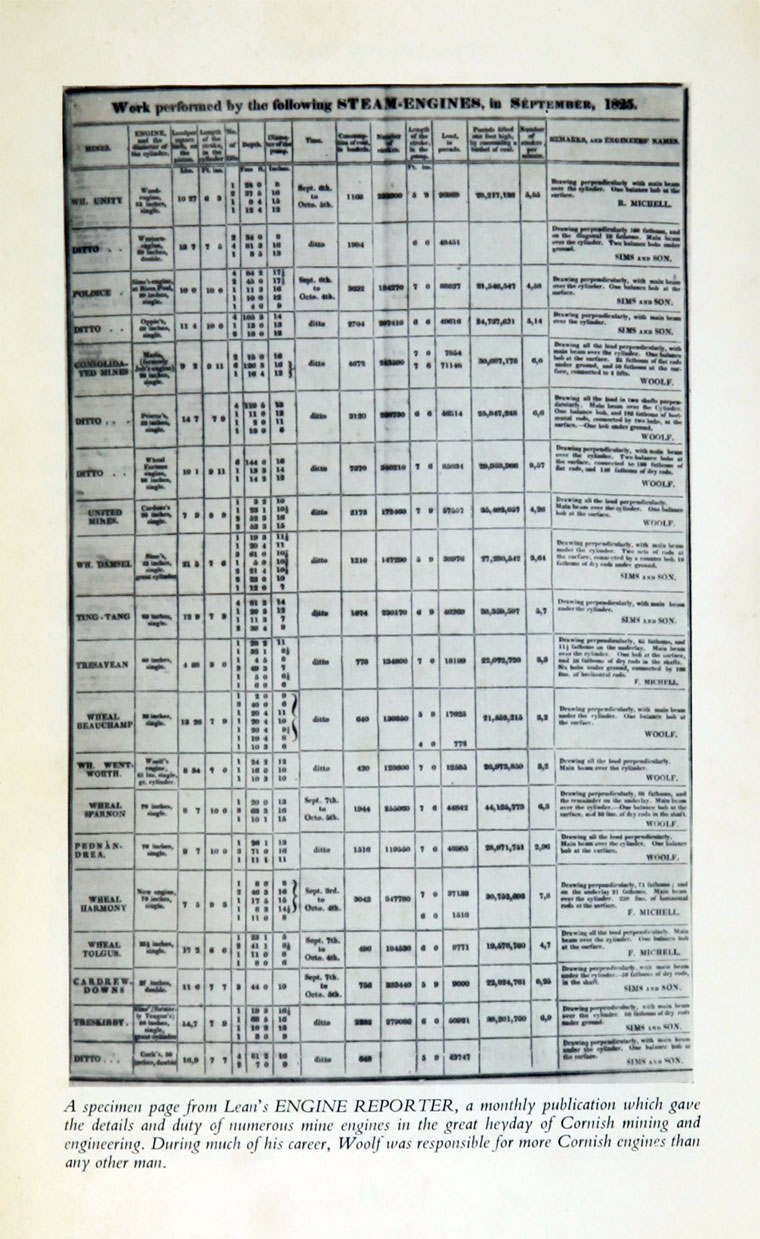 1966. A specimen page from Lean's Engine Reporter (a monthly publication). 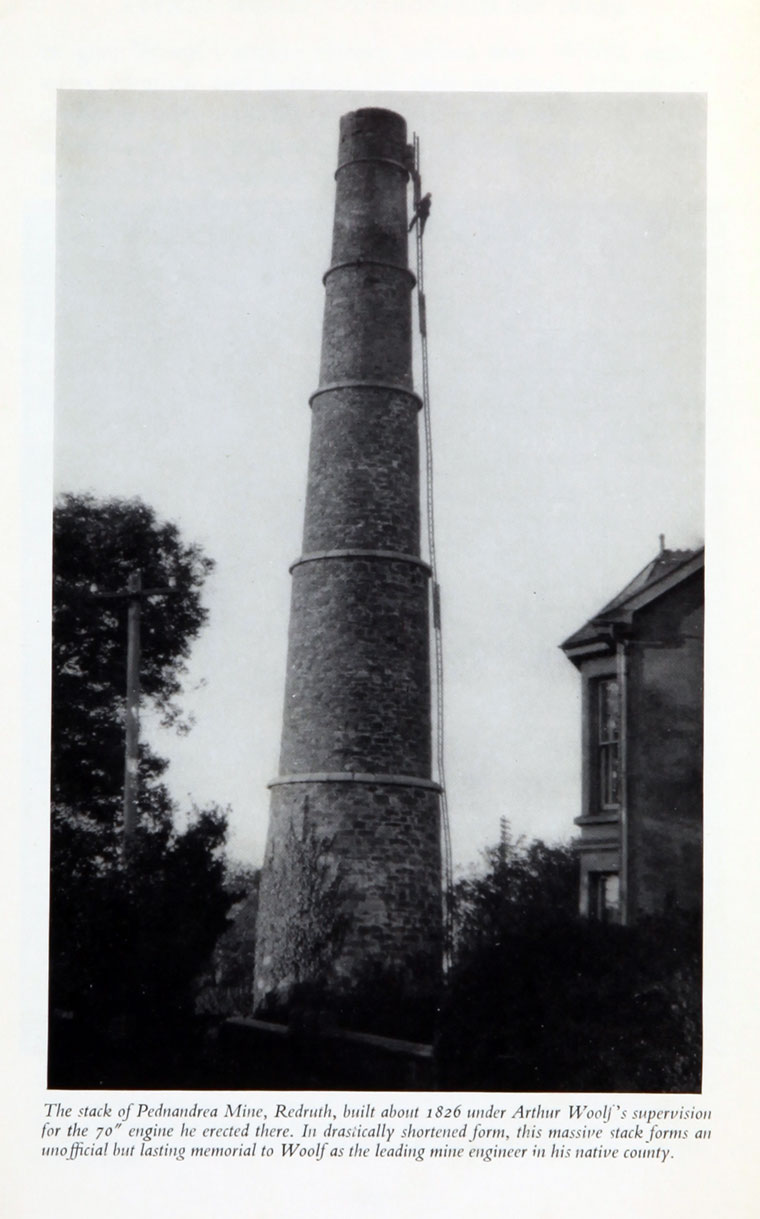 Arthur Woolf (1766-1837) was an English engineer who made major contributions to the design and construction of steam engines.

He was apprenticed to a carpenter at Pool, near Camborne, and after the expiry of his indentures he went to London.

Woolf left Cornwall in 1785 to work for Joseph Bramah's engineering works in London. He worked there and at other firms as an engineer and engine builder, when he returned to Cornwall. Michael Loam, inventor of the Man engine, was trained by him.

1800 Invented an apparatus for heating water using waste steam, with means of controlling the temperature, installed at Meux Brewery.[1]

1803 in Trevithick's pay, sent to London with the first high-pressure engine.

c1803 He was working for the Meux's Brewery in London as Resident Engineer.

1803 Woolf obtained a patent on an improved boiler for producing high pressure steam.

1805 he patented his best-known invention, a compound steam engine. Woolf had appreciated the fact that instead of exhausting the steam from a high presssure engine, it could be passed to a low pressure condensing engine to extract more energy, hence the compound engine. Compound engines became popular on the Continent, due to the relatively high cost of coal. In France the compound engine became known as the machine de Woolf.

Woolf's first compound engine was installed at Meux's Brewery, with the main parts made by Fenton, Murray and Wood. Performance was disappointing, partly due to roughness of the low pressure cylinder bore causing problems with piston sealing, and partly due to a mismatch between the sizes of the high and low pressure cylinders. Improvements were slowly implemented, including fitting a larger HP cylinder and reboring the LP. The engine was tested in March 1808 by Richard Trevithick, witnessed by Davies Gilbert, who found the engine to be very economical, but restricted in output by the size of the boiler.

John Rennie declared that the engine's performance was inferior to those of Boulton and Watt, and as a result the brewery bought a 30 HP engine from B&W and discarded Woolf's engine, leading to Woolf's resignation. However, in 1811, two men who superintended Meux's engines signed a sworn affidavit stating the Boulton & Watt engine used more fuel than Woolf's to do the same work, and that the increased consumption of coal cost the brewery above £1000 per annum.

Entered in to a parnership with Humphrey Edwards, a millwright of Mill Street, Lambeth, for producing engines and boilers; this agreement was dissolved in 1822.

Woolf paid great attention to the accuracy of machining of engine components, and designed and produced machinery, including self-acting lathes, to improve accuracy and quality of finish and to reduce production costs. He was dissatisfied with hemp piston packing, and developed metallic piston rings, originally prpoposed by Rev. Dr, Cartwright.

1811 Advertisement: 'WOOLF’S PATENT STEAM ENGINE. London, April 17,1811. THIS is to certify, that we, the undersigned, were present on the 14th of March, 1811, on the premises of John Hodgson, Esq. and Co. to witness an experiment made with Steam Engine of eight horses' power, erected by Messrs. Bolton and Watt, to ascertain what quantity of wheat could be ground by the said Engine with a given quantity of coals. The Engine was in good working condition, the mill-stone in good order, and the experiment was made with one pair of stones, French burrs, 4 feet 2 inches diameter.
The Engine was worked with proper care and attention for three hours and fiity minutes, and in that time ground three quarters, seven bushels and a half of wheat, Winchester measure, with five and one third of a bushel of coals. The weight of the wheat was 59 pounds, neat, per bushel. The coals were from Collingwood Main, 448 pounds.
James Burton Engineer, Richard Dewdney, Miller, John Penn, Engineer, George Nicholls, Miller at Messrs. Hodgsons, Richard Pearce, Miller, Messrs. Hodgsons.
London, 17th April, 1811.
The advert continued with the results of other witnessed tests at Woolf and Edwards, Mill Street, Lambeth, and then concludes: From the above Certificate it appears, that with one of Messrs. Bolton and Watt's best Engines of eight horses’ power, not quite six bushels of wheat, Winchester measure, can be ground into flour with one bushel of 84 pounds of Newcastle coals; and that with the same qiantity of coals, Woolf's nine horse Engine can grind from 20 to 24 bushels of the same wheat. In other words, Woolf's Patent Steam Engine of nine horses' power can lift from 40 to 45 millions of pounds one foot high, with one bushel of coals.—Engines of greater power can lift considerably more with the same quantity of fuel.
For Licences to Construct or use Woolfs Steam Engine apply to Mr A. Woolf, Camborn, Cornwall: or Mr. Alexander Tilloch, Star Office, Temple-bar.
N. B. Engines on Mr. Watt’s principle may altered to embrace Woolf's improvements, at moderate ex-pence.
*The Mill and Patent Steam Engine are to be Sold by Private Contract.— Apply on the Premises, Mill-street, Lambeth. [2]

About 1814 he introduced his compound engine into the mines for the purpose of pumping, erecting engines at Wheal Abraham and Wheal Vor in 1814 and 1815.

1816 Became superintendent of Hayle Foundry in overall charge of the foundry from March 1816 onwards.

1824 he erected engines at Wheal Busy.

1825 he erected engines at Wheal Alfred and Wheal Sparnon.

He also introduced improvements to Richard Trevithick's boiler design. His engines were, however, quickly superseded by Trevithick's high-pressure single-cylinder engine, which had the advantage of greater simplicity in construction.

From about 1816 until 1833 he acted as superintendent of Harveys of Hayle engine foundry.

He was also active as a civil engineer, and a notable construction was the swing-bridge he designed for the Penryn to Falmouth road.

Woolf developed a type of boiler designed to work at relatively high pressures. The arrangement can be seen in the first three illustrations above. There were two tubes exposed to the full heat of the fire, and above these was the boiler drum, part of whose bottom surface was heated by the gases which had passed over the tubes. The gases were then directed over more of the surface of the drum (below the waist line), before escaping up the flue. The overall impression is of a design much more modern than 1819, but this impression is undermined by the fact that it was made of cast iron. As T. R. Harris noted, only small wrought iron plates were available at the time, requiring numerous riveted joints, while the art of the ironfounder 'was far in advance of the boiler-plate maker'.

Note the manhole cover, which is pressed against its seat by internal steam pressure. The cover and branch are oval, allowing the cover to be inserted from outside. The feed water supply pipes have two-bolt flanges, presumably screwed onto the pipe. A similar principle was later adopted on high pressure hydraulic systems. At the left hand end of the drum is a cast iron mounting which contained two weighted safety valves and a float. The float is missing on the model, and its purpose is uncertain. It appears not to be connected with the feed water supply, and it may have acted to release steam to warn the operator of low water level.

T. R. Harris wrote a biography, published in 1966, aimed at bringing Woolf's achievements out of obscurity.[4]. This provides the source for much of the technical information presented above.

The Council have to regret the loss to the Institution by death of its Member, Arthur Woolf.

This distinguished individual was born at Camborne, in Cornwall.

He was a millwright, and in that capacity went to London, and was employed in Meux's Brewery.

In 1804, he took out a patent for his Two Cylinder Engine, working high pressure steam in a small cylinder, and allowing it to expand in a large one.

When he first commenced erecting engines in Cornwall, he induced the proprietors of the Foundries to improve their machinery, that a better style of workmanship might be used in the manufacture of steam engines; and he introduced an improved Hornblower’s double beat valve.

The work done at the Consolidated Mines, proves him to have been a person of great talents.

In 1820, Mr. Woolf erected engines at the Consolidated Mines having cylinders of 90 inches in diameter, and a stroke of 10 feet - the most powerful that had ever been constructed.

In December, 1827, a trial took place with one of Woolf's 90-inch engines, and it performed a duty of 63.5 millions - the average duty of 47 engines reported in this year was 32 millions, For some years before his death he received a pension of 100 pounds a year from the proprietors of the Consolidated Mines.

His name is associated with the improvements in the drainage of the Cornish mines; and whatever share posterity may assign to his individual genius in these improvements, his name is recorded in the page of history among those who have dedicated their talents and the opportunities of a long life to the advancement of practical science.