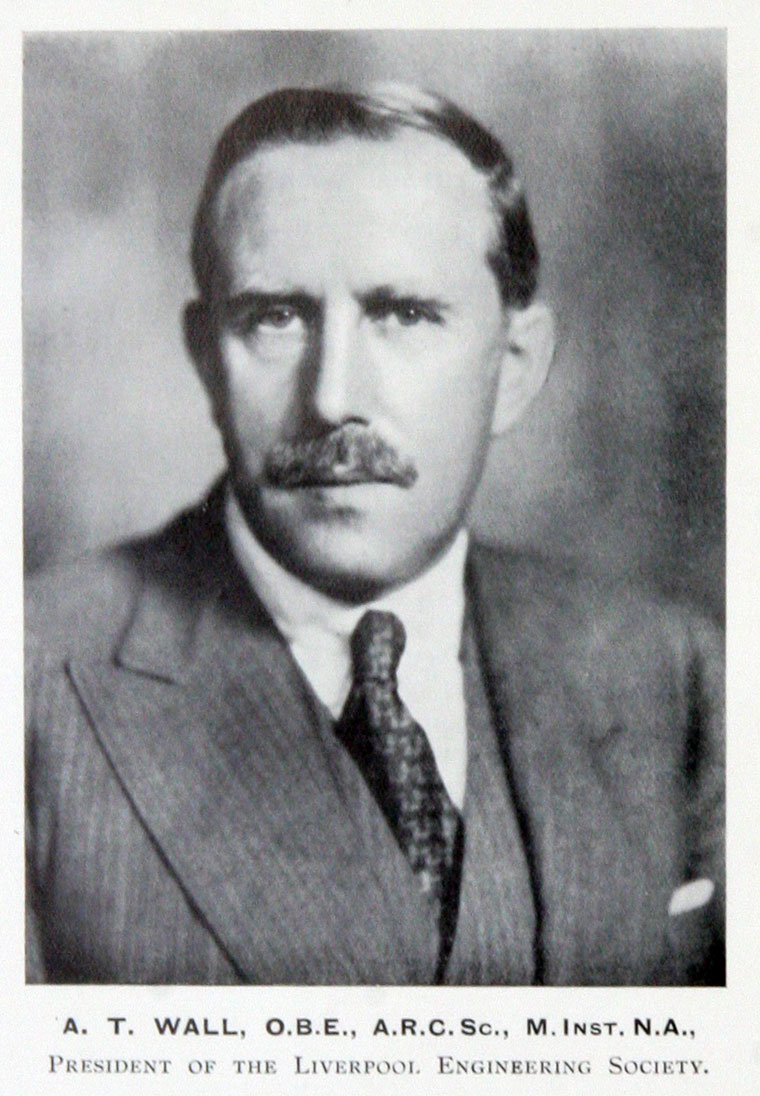 IT is with the deepest regret that we have to record the death, at his home, "The Hayes," Baring Road, Cowes, on Sunday last, September 14th, at the early age of fifty-five, of Arthur T. Wall, who, we may recall, retired about a year ago from the managing directorship of J. Samuel White and Co., Ltd., a position which he had held with distinction since his appointment in 1932.

Arthur T. Wall was born at Plymouth in 1886, and received his early education at Stoke and Plymouth, gaining King's Prizes in Science and Art. He continued his technical training at the Royal College of Science and at the Royal Naval College at Greenwich, where he was awarded the gold medal of the Liverpool Engineering Society, and one of the premiums given by the Institution of Naval Architects. On leaving Greenwich he was appointed to Devonport Dockyard, from which he proceeded to the Thames Ironworks Company, Ltd., and took up the position of chief draughtsman.

It was during Mr. Wall's time that H.M.S. "Thunderer," the last capital ship to be constructed on the Thames, was built. He was later chief draughtsman of the Booth Steamship Company, Ltd., of Liverpool, a position he relinquished on his appointment as chief naval architect to Cammell Laird and Co., Ltd., at Birkenhead.

During his long period of service with that firm he was engaged on the design of many Channel steamers and merchant ships, and the light cruisers H.M.S. "Chester" and " Birkenhead," which in 1914 were under construction for the Greek Government and were taken over by the Admiralty in 1915.

He was responsible also for the design of the motorship "Fullagar," which was the first all-welded self-propelled ship to be built. He also prepared the first design of a ferro-concrete barge, which was approved by Lloyd's Register of Shipping. During the last war he was a member of the Lancashire Anti-Submarine Committee.

On leaving Cammell Laird's about 1923 Mr. Wall commenced business on his own account as a consulting naval architect in Liverpool, and later practised in London. In those years he was associated with the design and construction of many interesting ships for both British and overseas shipping companies. He was responsible for the design of the "Beaver" class of fast coal-fired cargo ships built for the Atlantic service of Canadian Pacific Steamships, Ltd.

He also designed the "Lady Nelson" and the "Prince David" class of ships for Canadian National Steamships. In collaboration with Mr. James Dewar, he advised on the design and construction of the liners "Vulcania", and "Saturnia," built at Monfalcone for the Cosulich Line.

In 1932, when Mr. Wall was called upon to take charge of the J. Samuel White Cowes undertaking, shipbuilding was practically at a standstill. Happily the succeeding years saw a revival, and he had the satisfaction of seeing during his period of management the fortunes of the firm rebuilt. Combining his long experience of naval architecture and the newly introduced art of welding, with a capacity for getting orders for new ships, whether naval craft, merchant ships, or yachts, from Governments, shipowners or yachtsmen, new construction was undertaken under Mr. Wall's leadership, and with the revival of naval shipbuilding the Cowes yard was, in 1938, probably as busy as, or busier than, it had ever been in its long history.

Interesting ships with which Mr. Wall was personally associated at the yard were the two Polish destroyers "Blyskawica" and "Grom," both 2244-ton vessels with geared turbine machinery of 54,000 S.H.P., corresponding to a speed of over 39 knots. Other equally important orders were those for the two Brazilian destroyers "Javary " and "Jutahy," ships of 1340 tons, propelled by Parsons geared turbines with a designed output of 34,000 S.H.P. and a speed of 35.5 knots.

When, in November last, Mr. Wall decided to retire from the firm on account of ill-health, we expressed the hope of many friends that a period of rest would enable him to regain his health and again take up that work which he was so ably fitted to carry through. Unfortunately, as time went on there was no improvement. He died on Sunday last. The industry to which he gave so much can ill afford the loss it has sustained, and the death of Arthur T. Wall will be mourned by many business and personal friends, both in this country and abroad.