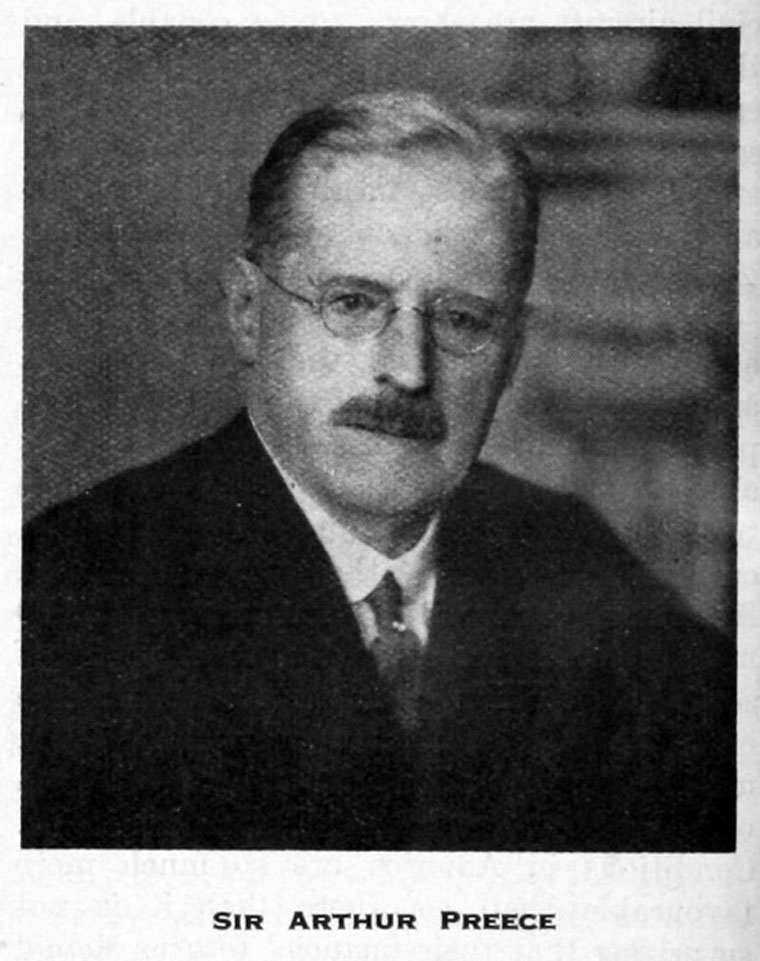 THE death of Sir Arthur Preece, which occurred at Quains, Virginia Water, on January 31st, will be deeply regretted by his many friends in the civil and electrical engineering professions. For fifty-six years he practised as a consultant in Westminster with the firm which he founded in 1893.

In 1887 he began a pupilage with Elwell Parker, Ltd., contractors, of Wolverhampton, and on its completion became an assistant engineer in the erection and running of the central electric light station at Rathbone Place, London, which was built for the Metropolitan Electric Supply Company.

Arthur Preece's next appointment was as an assistant to the late Dr. Gisbert Kapp, in whose office he was engaged for two years on the preparation of plans and specifications for the Bristol electric light station.

In 1893 Sir Arthur started his practice as a consulting electrical engineer and, as the years passed, was responsible for the design and construction of many of the early electric generating stations, including those at Hammersmith, Wimbledon, Llandudno, Kingston-on-Thames, Gibraltar and Malta. The practice increased and when Sir William Preece retired, early in 1899, from the position of Engineer-in-Chief of the General Post Office it was merged in the firm of Preece and Cardew, the partners being Sir William Preece and his two sons, Llewellin and Arthur, together with the late Major Philip Cardew, who had retired from the post of electrical adviser to the Board of Trade.

For the rest of his working years Sir Arthur Preece's activities were concerned principally with the demands for electricity supply not only in this country but in many parts of the world. His advice on electrical matters was sought by the Government of India, by the Argentine Republic and several other countries. Sir Arthur was among those who soon became convinced of the benefits to be derived from adequate and efficient electricity supplies in the Colonies and to the work of their establishment he devoted considerable attention.

His services to the Empire were recognised in 1932, when his knighthood was conferred.

For some years Sir Arthur had been troubled by failing eyesight, an affliction which compelled him to retire, on medical advice, two years ago.